SAG Awards 2019: All Of The Best & Worst Dressed Stars Ranked

The annual Screen Actors Guild Awards celebrated their silver anniversary this year with 25 years of honor and celebration for the entertainment industry. Many of Hollywood’s biggest and brightest stars attended the event and walked the red carpet in their most glamorous attire. While there were quite a few looks that left us swooning, there were also a few that left us scratching our heads in confusion. Follow along as we recap and rank all the best and worst looks from this year’s 2019 SAG Awards.

Ozark actress Sofia Hublitz stepped out at the annual SAG Awards this year wearing a golden belted dress by Marchesa. The look was a striking shade of champagne that complemented Hublitz’s fair complexion and blonde tresses fabulously. We love the delicate embroidery of this dress and the pop of burgundy from the belt which she expertly coordinated with a red lip.

Actress and influencer Cara Santana almost nailed her SAG Awards look this year, but just missed the mark. While we love this bold color of blue on Santana’s complexion, the excess of layered fabric on the skirt of the dress seemed to overwhelm Santana’s petite figure and detract from the flattering silhouette of the dress.

Patricia Clarkson took a risk with her SAG Awards look this year, but we think it was a risk well rewarded! A dramatic gown like this wouldn’t be everyone’s cup of tea, but we think the champagne, embroidered number works fabulously on Clarkson. The Zuhair Murad dress feels mature, but still trendy with the dramatic cape-style sleeves, sheer bodice, and high slit.

Actress Rhea Seehorn missed the mark with her colorful look for this year’s SAG Awards. While we typically love intricate detailing on a dress, the crossed bodice of this Georges Chakra number felt stifling, confusing and a wardrobe malfunction waiting to happen. We also weren’t the biggest fans of the stark contrast of colors from black to magenta to grey to black.

Actress Rachel Weisz was a total showstopper at this year’s Screen Actors Guild Awards where she stepped out in this one-shouldered black number by Givenchy. The look featured a metallic silver belt and a stunning layer of metallic feathers along the skirt. The look was unique, but in a subtle way which is really what made it such a winning fashion moment.

Actress Melissa McCarthy stepped onto the SAG Awards red carpet this year in a full sequin metallic dress that we weren’t totally convinced by. As much as we love a little glitz on the red carpet, this simply felt like too much glitter. We would have much preferred to see McCarthy wear glitter in a more subtle way rather than opting for a dress that was completely covered and felt overwhelming.

Elisabeth Moss has had a rough journey with her awards show fashion last year, so we’re happy to see a shift in her style in 2019. Moss had a true fairytale red carpet moment at the SAG Awards where she opted for this cream gown by Monique Lhuillier that featured a drop-style waist and black belt. The subtle polka dots on the skirt and corset-inspired bodice really made for a show-stopping fashion moment.

Angela Bassett took a huge risk with her 2019 SAG Awards look, and while we were initially on the fence about it, we have to admit we think she missed the mark. The Georges Chakra look featured a plunging neckline and various size ruffles covering the entire dress. The look was seriously bold, but we’re simply not sure it was the most flattering option and felt a little over the top.

Actress Laura Harrier stunned at the SAG Awards this year in a bright pink gown designed by Loewe. What we especially love about this look is that while the color is obviously quite bold, the dress itself feels really dainty with the A-line shape and flirty off-the-shoulder neckline.

Killing Eve actress Kirby Howell-Baptiste stepped out at the annual SAG Awards this year wearing a feminine pink dress that featured a Princess-shape skirt and glittering texture. While the dress itself isn’t too bad, we can’t get over the juvenile-feeling pink bows that the actress rocked in her ponytail.

Amy Adams had a special night at the SAG Awards this year where she was nominated for two awards! Luckily she had a memorable and unique dress by Celine to match the occasion. We absolutely love the quirky peplum shape of this dress. This look works because while the top is voluminous and bold, the skirt balances well with it since its slim and sleek.

Glow actress Kate Nash wore a highly questionable gown for this year’s SAG Awards that consisted of a neon pink color, locked chain heart design, and oversized puffy shoulders. While any of these design elements could have worked individually, they felt quite tacky when paired altogether.

Jane Fonda looked as youthful as ever at this year’s SAG Awards where she donned a cherry red A-line dress that featured a mermaid-style scalloped design throughout. We love the flared out sleeves of this dress and how they flawlessly drew attention to the $3 million dollar ring on her finger.

Rumer Willis definitely missed the mark with her dress for this year’s SAG Awards. We love a strong red dress when it comes to awards show fashion, but this Ong-Oaj Pairam look seemed to be tailored insufficiently for Willis’ figure. The sleeves, skirt, and bodice were bunched and bulging in all the wrong places.

Crazy Rich Asians star Constance Wu dazzled in a silver Oscar De La Renta dress at this year’s SAG Awards. We love how dainty this look feels with the sleek, body-skimming shape and subtle slit. We also love the unexpected gold brooch which sat at her hip and was an unexpected and trendy touch of mixed metals.

Actress Rachel Brosnahan definitely had a memorable evening at this year’s SAG Awards where she went home with her first SAG award. While we’re definitely huge fans of Brosnahan as an actress, we can’t say the same for her dress. The lace on this powder blue number felt outdated rather than fashionably vintage and the skirt seemed to cut off at a strange length around the ankles.

Crazy Rich Asians star Gemma Chan stole the show at the SAG Awards this year in this powder pink ruffled dress by Oscar De La Renta. The look featured high-fashion layers that were scalloped along the edges and a flattering black belt that showed off her tiny waist perfectly among the dramatic layering of the skirt.

Emily Blunt has had a few misses on the red carpet this past year, and we are disappointed to say that she’s stricken again. While we were actually big fans of the slim and glittery shape of this custom Michael Kors dress, we can’t get over the strange ruffled shoulders that overpowered and detracted from the entire look.

With a feathered look this bold, you either love it or hate it! We personally think that Danai Gurira looked absolutely stunning in this crisp Ralph & Russo number. The dress was obviously a show-stopper, but where better to make a fashion statement than a glamorous award show like Screen Actors Guild?

We’re not sure what Sophia Bush was thinking with this black tulle number she wore to the 25th annual SAG Awards this year. This look felt off brand for Sophia and strangely gothic, which has never been her style. While we love strong black dresses and cape detailing, the combination of the two made for a big fashion miss.

Yara Shahidi wore one of our favorite and most unique looks of the night at the SAG Awards! Her look featured a skintight pink catsuit that was balanced out by a tulle layer on top. This look was unlike anything we’ve seen before, and we applaud Shahidi for taking a red carpet fashion risk that totally paid off.

Madeline Brewer stepped out onto the Screen Actors Guild red carpet this year wearing a highly questionable lace gown. The look felt quite matronly in all honesty and we’re not sure the combination of black and red made for a dainty lace fashion moment. The dress felt somewhat cheap, especially with the completely sheer lace skirt that we’re not totally convinced was intentional.

Mandy Moore was one of the most elegant stars of the evening at this year’s SAG Awards. The brunette beauty opted for an off-the-shoulder dress by Jason Wu that featured a touch of glitz around the shoulders, long sleeves, and a sultry thigh-high slit.

Sandra Oh dazzled in crimson red at this year’s Screen Actors Guild Awards where she donned a slim, sparkling dress by Jenny Packham. We absolutely love the unique layering and asymmetrical details of the bodice on this dress and how fabulously it flourished out into a glamorous full train behind her.

Lucy Boynton wore a highly questionable look at this year’s SAG Awards which consisted of a sheer, black polka dot overlay which sat on top of a floral dress beneath. The look was undeniably edgy, but it simply felt chaotic and lacked the red carpet glamour factor we were hoping for.

Margot Robbie absolutely nailed her Screen Actors Guild Awards look this year with this gold and white Chanel number. We love the sleek, column-style shape of this dress and how flattering the gold tiers are that trail along the skirt. This glitzy look is the epitome of old Hollywood glamour!

Unsurprisingly, Lady Gaga looked absolutely angelic at this year’s SAG Awards where she opted for a voluminous white gown designed by Dior Haute Couture. The shredded tulle hemlines of the gown were feminine but also edgy, which perfectly encapsulates Gaga’s personal style. She accessorized with a chunky gold choker necklace and an oxblood lip which made for a truly glamorous red carpet moment.

Of all the looks from this year’s SAG Awards, we have to admit we were the most disappointed with this look worn by Alison Brie. While the dramatic bow detail along the back of the dress looked pretty from behind, from the front it resembled a strange set of wings. We love the sleek shape of this little black dress, but the detailing on the back was totally distracting. 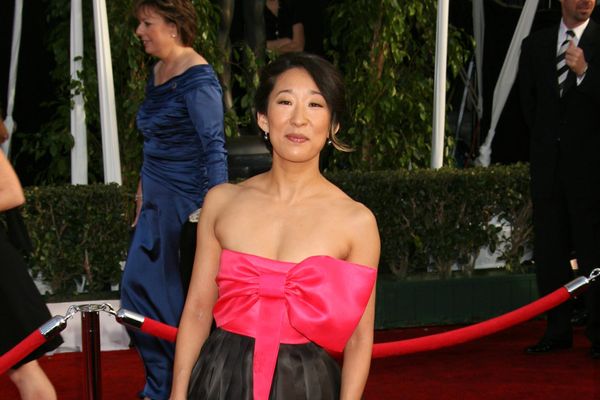