SAG Awards 2019: The 20 Most Disappointing Looks

The 2019 Screen Actors Guild Awards celebrated their silver anniversary this year with 25 years of honor and celebration for the entertainment industry with their annual event. Many of Hollywood’s biggest and brightest stars attended the event and walked the red carpet in show-stopping designer garments. While there were obviously quite a few best-dressed looks that we swooned over, there were also a few that left us disappointed. The most disappointing red carpet looks are always the ones that come from actresses we have high expectations for but end up falling short in the fashion department. Follow along as recall the 20 most disappointing looks from this year’s 2019 Screen Actors Guild Awards.

Actress Ellen Wong stepped out at this year’s SAG awards wearing a head-to-toe sparkling gown designed by Kelly NG. Wong is so beautiful that we definitely had high expectations for her look on the red carpet, but we were, unfortunately, let down. Ombre is a dress trend that seems quite outdated in 2019, and we would have much preferred to see her in something a little more contemporary and trend-forward.

Angela Bassett took a huge risk with her 2019 SAG Awards look, and while we were initially on the fence about it, we have to admit we think she missed the mark. The Georges Chakra look featured a plunging neckline and various size ruffles covering the entire dress. The look was seriously bold, but we’re simply not sure it was the most flattering option and felt a little over the top.

Actress Rhea Seehorn missed the mark with her colorful look for this year’s SAG Awards. While we typically love intricate detailing on a dress, the crossed bodice of this Georges Chakra number felt stifling, confusing and a wardrobe malfunction waiting to happen. We also weren’t the biggest fans of the stark contrast of colors from black to magenta to grey to black.

We were quite confused with this look worn by Kimmy Gatewood at the SAG awards this year. The collar detailing didn’t pair well with the sheer, corset-style bodice and the color seemed to drown out her complexion. Needless to say, we were quite disappointed with this look!

Meghan Mullally’s dress caused a huge frenzy on the red carpet this year because the star revealed that she picked out her own dress online. While we love this thrifty side of Mullally, we have to admit that we weren’t the biggest fan of the Alexander McQueen number she selected. The embellishment on the front was a little strange for our liking!

Rachel Bloom stepped out at the SAG awards this year wearing a taupe satin dress that felt quite underwhelming. The color didn’t do much to flatter her complexion and the material of the dress looked wrinkled which was quite distracting. We do, however, love her old Hollywood-inspired waves!

Lucy Boynton wore a highly questionable look at this year’s SAG Awards which consisted of a sheer, black polka dot overlay which sat on top of a floral dress beneath. The look was undeniably edgy, but it simply felt chaotic and lacked the red carpet glamour factor we were hoping for.

Actress Melissa McCarthy stepped onto the SAG Awards red carpet this year in a full sequin metallic dress that we weren’t totally convinced by. As much as we love a little glitz on the red carpet, this simply felt like too much glitter. We would have much preferred to see McCarthy wear glitter in a more subtle way rather than opting for a dress that was completely covered and felt overwhelming.

Madeline Brewer stepped out onto the Screen Actors Guild red carpet this year wearing a highly disappointing lace gown. The look felt quite matronly in all honesty and we’re not sure the combination of black and red made for a dainty lace fashion moment. The dress felt somewhat cheap, especially with the completely sheer lace skirt that we’re not totally convinced was intentional.

Actress Rachel Brosnahan definitely had a memorable evening at this year’s SAG Awards where she went home with her first SAG award, but we were unfortunately quite disappointed with her choice of attire for the evening. While we are huge fans of Brosnahan as an actress, we can’t say the same for her dress. The lace on this powder blue number felt outdated rather than fashionably vintage and the skirt seemed to cut off at a strange length around the ankles.

Crazy Rich Asians star Fiona Xie wore an interesting rainbow dress for this year’s Screen Actors Guild Awards. While we can appreciate a fairytale princess moment on the red carpet, this look seemed to miss the mark. The dress felt chaotic and had far too much going on from the rainbow fabric to the tulle skirt to the bizarre floral embellishment on the bodice.

GLOW actress Gayle Rankin stepped out in an interesting scarlet red garment at this year’s 2019 SAG Awards. We have to admit that we were quite surprised and confused with this look. The red dress itself wasn’t too bad, but the strange bow embellishment on the chest made the dress look cheap. We also weren’t the biggest fans of her bizarre rocking horse-inspired clutch.

Killing Eve actress Kirby Howell-Baptiste stepped out at the annual SAG Awards this year wearing a feminine pink dress that featured a princess-shape skirt and glittering texture. While the dress itself wasn’t too bad, we can’t get over the juvenile-feeling pink bows that the actress rocked in her ponytail. We were quite disappointed with her choice of hair accessory because other than that, this could have been a killer red carpet fashion moment.

Rumer Willis definitely missed the mark with her dress for this year’s SAG Awards. We love a strong red dress when it comes to awards show fashion, but this Ong-Oaj Pairam look seemed to be tailored insufficiently for Willis’ figure. The sleeves, skirt, and bodice were bunched and bulging in all the wrong places. We were disappointed with this look because it’s clear that one extra fitting could have easily bumped this from a losing red carpet moment to a major winner.

This Is Us star Susan Kelechi Watson went the bold route with her look for this year’s Screen Actors Guild Awards. While we can definitely appreciate a fashion risk, this look seemed to be a little off. The main problem is that both the color and tulle layering of this dress were bold, which in combination, felt a little over the top. If the actress had opted for a tiered skirt in a muted color or vice versa, a look like this definitely could have had potential.

We’re not sure what Sophia Bush was thinking with this black tulle number she wore to the 25th annual SAG Awards this year. This look felt off brand for Sophia and strangely gothic, which has never been her style. While we love strong black dresses and cape detailing, the combination of the two made for a big fashion miss and left us quite let down.

Emily Blunt has had a few misses on the red carpet this past year, and we are disappointed to say that she’s stricken again. While we were actually big fans of the slim and glittery shape of this custom Michael Kors dress, we can’t get over the strange ruffled shoulders that overpowered and detracted from the entire look.

Of all the looks from this year’s SAG Awards, we have to admit one of the most disappointing was this look worn by Alison Brie. While the dramatic bow detail along the back of the dress looked pretty from behind, from the front it resembled a strange set of wings. We love the sleek shape of this little black dress, but the detailing on the back was totally distracting.

We have high expectations when Emma Stone hits the red carpet, but we have to admit we were quite let down with this jumpsuit look she wore for the 2019 SAG Awards. Firstly, the star was almost unrecognizable after dropping her signature red tresses and switching to a dark brunette. We also weren’t the biggest fans of her jumpsuit look that featured ill-fitting trousers and a bizarre neck detail that wasn’t the most flattering. 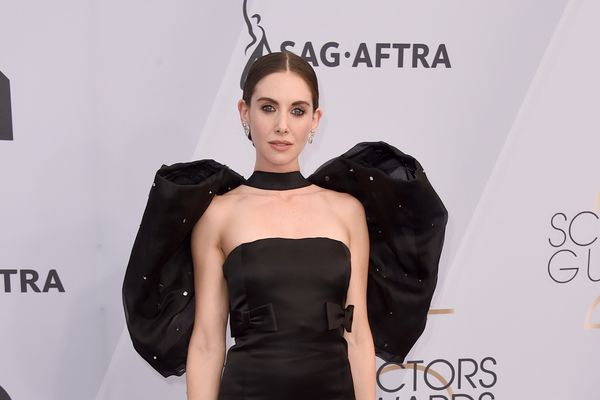 SAG Awards 2019: All Of The Best & Worst Dressed Stars Ranked