No female fashionista quite left their mark the same way the infamous Carrie Bradshaw did on the set of Sex and The City. Her eccentric fashion sense experimented with tulle tutus, heavy fur and bold florals which proved her to be a character who can truly pull off any fashion look despite how outrageous. On her meager columnist salary, Bradshaw managed to dress herself in impressive couture brands like Manolo Blahnik, Dior and Chanel which left fans ogling each episode. The streets of New York were made for Carrie Bradshaw’s influential fashion sense and women everywhere still look to her for style inspiration over a decade later. Follow along for Carrie Bradshaw’s memorable style moments from Sex and the City:

Proving her to be a versatile fashionista, Bradshaw stepped out donning a midi-length striped dress and classic white gloves when attempting to follow Mr. Big to church. She questioned Big when he confessed he attended church each week with his mother, so Carrie showed up in her Sunday best and was undoubtedly dressed to impress. Her candy stripe-inspired look was topped with a wide-brim floppy hat and a plum clutch that was both demure yet classy for church.

A designer fashion moment on set that stands out in our minds is the gorgeous Dolce & Gobanna number that Carrie almost wore down the Vogue runway. She was chosen to strut down the runway in a “Real People Of New York” segment the magazine was pursuing, but the Vogue team later decided the fitted creation was more suited to the long-legged Heidi Klum. Although the dress didn’t go to Carrie, we couldn’t help but admire how flawless she looks in this dark floral high couture garment.

With abs like Sarah Jessica Parker, it’s no wonder Carrie was constantly boasting bare-it-all crop tops that showed off her figure. Despite playing a middle-aged woman, Carrie had no shame to wear revealing clothing and show off her washboard abs, which proved that aging doesn’t have to require growing modest. She paired the look with light wash jeans and an unconventional pair of bedazzled platform pumps that we would never think to style with plaid, but of course she pulls it off fabulously.

Aidan made Carrie toss this textured Roberto Cavalli outfit when he moved in with her claiming he didn’t have enough room for his belongings and she needed to purge. Although Carrie admitted she hadn’t worn the top for years, it somehow found it’s way back into her wardrobe after they split and we are so glad it did! This textured creation looks stunning layered on top of a plain white dress with a topknot hairstyle to finish off the entire look.

In an act of channeling her inner journalist, Carrie stepped out in a Dior dress that was entirely covered in newspaper print. The dress was so iconic, she actually wore it on two separate occasions — once on the show and once in the first movie. Only Carrie Bradshaw could pull off a statement look like this and she somehow manages to make a piece of paper look super chic!

There’s nothing that screams Carrie Bradshaw more than a pale pink tulle tutu. Fans saw this specific skirt every episode in the opening credits and never got tired of seeing her flouncing the streets of New York in this ballerina-inspired number. This look is undeniably a Sex and The City icon and was one of the few pieces of Carrie’s wardrobe deemed worthy of keeping when she clears out her closet in the spin off film.

Chanelling everything we love about European fashion, Bradshaw took to the streets of Paris donning a mixed stripe outfit with an extravagant rose detail on the front of her blouse. Although we may not love this look in New York, it was the perfect outfit for an afternoon traipsing the streets of Paris. One of Carrie’s signature styles was wearing oversized flowers, whether in her hair or on a blouse, so we love that she transformed this look into a romantic, whimsical style that was perfectly suited for the city of love.

Heartbreak somehow doesn’t seem as bad when you’re wearing an extravagant turquoise gown in the core of Paris. Carrie intended to wear this ruffled creation on a date with Petrovsky, but the Russian poet tragically stood her up and she was left waiting for hours. The gown was crafted with acres of tulle and chiffon and was a dark shade of sea foam green. This moment pulled on our heartstrings and proved how tragic it is for a beautiful woman to be all dressed up with nowhere to go. 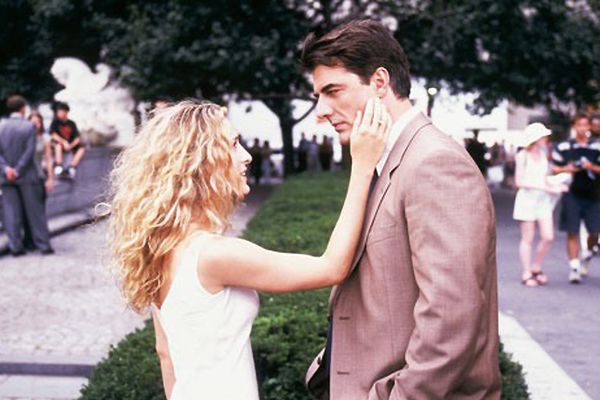