The 8 Shocking Photos These Celebs Don’t Want You To See!

Celebrities are in the spotlight 24 hours a day, 7 days a week. To make matters worse, some stars have been in the spotlight for decades. As time passes, many of Hollywood’s most elite individuals probably regret some of their red carpet choices. Whether it’s a highly publicized makeup blunder, a bad camera angle, a fashion disaster or a momentarily lapse of judgement, these 8 celebs most definitely regret the photos you’re about to see.

Hopefully, as time passes, they too can learn to laugh at their mistakes.

Take a look at the 8 shocking photos these celebs don’t want you to see:

Sarah Michelle Gellar is one of Hollywood’s sweetest and prettiest women. Unfortunately, on July 29 of this year (2013) she stepped onto the red carpet of CBS’ 2013 Summer Stars Party looking like a hot mess. Her makeup is awful and her hair looks grey. The entire look makes her seem like an 85-year-old witch who is about to hand out candy to trick-or-treaters. Sorry Sarah!

We’ll blame this terrible pic of Drew Barrymore on a combination of poor makeup judgement and a bad camera angle. Either way, the classy Drew we’ve come to love over the last few years wouldn’t be caught dead looking like this anymore.

Britney’s stylist team surely received their pink slips after the pop star’s appearance at the X Factor Season Finale Party in December of 2012. Even without the bad camera angle, this pic has disaster written all over it. From her atrocious eye makeup to her uneven bangs, there’s nothing about this photo that would make Brit proud. Luckily, she’s been looking pretty good in her appearances since.

Natalie Portman dazzles at every red carpet event she attends but there is one big exception: The 22nd Annual American Cinematheque Awards in Beverly Hills in 2007. Portman walked the red carpet looking like she spent 4 hours in a tanning bed. That color of skin combined with pale lipstick and silver eye shadow makes for one scary pic.

If you’ve visited Fame10 in the past, chances are you may have come across this photo of Kim Kardashian. Needless to say, the almost-unrecognizable Armenian reality star looks noticeably different now than she did in 2006, when this photo was taken. I guess Kim is one of those people who gets better looking with plastic surgery.

In the early 2000’s Jessica Simpson was known for her super slim figure and her million dollar smile. Just before she made it big, however, she looked like every other pudgy-faced teenager. Her amazing stylist team has seemed to make us forget that over the years.

Jennifer Lopez never steps out without looking absolutely perfect. That wasn’t the case at the beginning of her career, though. Here in this photo from 1997, Jenny From The Block looks pretty average, to say the least. Over the years she’s toned down her makeup and freshened up her wardrobe. Luckily for us, we have this picture to remind us that even the hottest of Hollywood stars started out looking relatively normal.

The poised and sophisticated Angelina Jolie we’ve come to love lately wasn’t always so elegant and classy. I’m sure Angie would rather we forget this infamous moment where she decided to full-on kiss her brother on the red carpet of the 2000 Golden Globe Awards. She may be married to one of the world’s hottest men now but this photo proves that Angelina wasn’t always the picture of perfection. 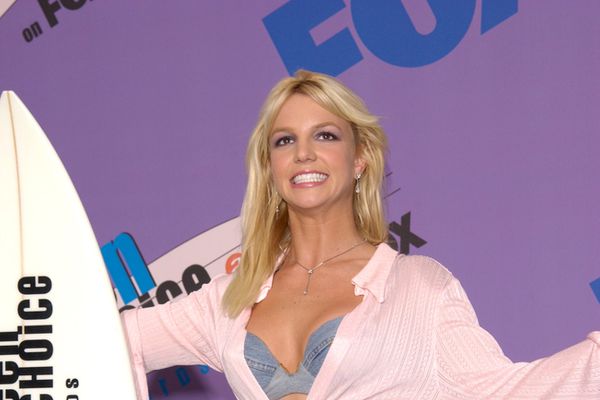 The 8 Photos Britney Spears Doesn’t Want You To See!