The Toronto International Film Festival, or TIFF, celebrates the most acclaimed up-and-coming films in the industry, many of which will go on to win Oscars. With such an exclusive event comes advanced screening premieres, star-studded red carpets, and glamorous parties. This year, we at Fame10 attended the festival firsthand and were able to be a part of the experience. Along with any high-profile celebrity event comes a variety of designer ensembles that will turn heads, however, sometimes not always for the better. Follow along for the most disappointing looks that we saw the stars wear on the red carpet this year at TIFF 2018:

We were conflicted about Natalie Portman’s red carpet look because we love satin textures and how flattering this soft lilac shade looks on her. The one downfall, however, is that the dress didn’t seem to fit her properly. The arms sagged and bunched in all the wrong places, which changed the entire vibe of her look.

Sienna Miller attended the red carpet for her film premiere, American Woman, wearing this floor-length black gown with a plunging neckline. Miller is such a natural beauty that she could seemingly pull off anything, but this black number was not one of her best fashion moments. The corset-bodice came across quite tacky for someone so sophisticated and elegant!

Elle Fanning rocked a black sequined gown with embellishment around the neck and hemline at TIFF 2018. Fanning has such delicate features and fair skin that this dress really drowned her. The neckline fell a little too low for comfort and the shape of the dress seemed to make her look wider than she is. The proportions of her look were definitely off.

Black was a common theme on the TIFF red carpet this year. We saw quite a few different variations of the little black dress over the course of the event, but we have to admit that this one worn by Maggie Gyllenhaal wasn’t the best. While the sleek shape and strapless cut aren’t the worst, we couldn’t get over the Christmas-reminiscent silver bows on either side of her shoulders.

Keira Knightley made a few different red carpet appearances this year at TIFF, but we were most disappointed with this casual look she wore to attend the Press Conference for her film, Collette.  Press conference red carpet appearances aren’t typically as formal as that of the premiere, yet the tied-up button-up shirt, cropped jacket, and knee-length skirt felt a little too casual for a glam film festival.

Julianne Moore stepped onto the TIFF red carpet before the premiere of Gloria Bell with director Sebastian Lellio. While Moore’s makeup was glowing and her sleek bun was super sophisticated, we were definitely quite disappointed with her choice of gown. Moore is so petite that this shapeless look drowned her with all the different layers of fabric. Not to mention that the color completely washed out her fair complexion.

Snakeskin has been a huge trend for pre-fall fashion this year. While we’re happy that Jena Malone jumped on this trend, we have to admit that this high-neck, floor-length gown felt like an overkill of the trend. We would have much preferred to see a pop of snakeskin on a shoe or bag for something a little more tasteful. We were also quite puzzled by her decision to wear ill-fitting black satin gloves.

Gabrielle Union arrived at the screening of her film, The Public, wearing another variation of a little black dress. Again, this was not one of her favorites. The details on the bodice were patchy, strange and reminiscent of a cow-print. The yellow pops of color also seemed quite random on the dress.

The Hate U Give star Amandla Stenberg is such a talented actress, but we can’t say the same when it comes to her fashion decisions. Stenberg opted for a floral print gown that featured a corset-bodice, sheer paneling, and ruffled tiers throughout. The look had a lot going on from the shape to the print to the bizarre hairpiece. We would have much preferred to see Stenberg in something a little more simple.

Hold The Dark cast member Riley Keough opted for a lingerie-inspired blush pink look for the TIFF red carpet premiere. While we can appreciate a sleek slip dress and subtle lingerie detailing, this look worn by Keough seemed like a little much. There were strings, cutouts, and lace in all the wrong places.

Ryan Gosling is another star who went the casual route with the look he wore to his press conference for First Man. While we don’t mind when stars opt for something a little less formal, this look worn by Gosling was straight up strange. His sweater featured a bizarre print that clashed with his heather grey plaid suit. We much prefer the look Gosling wore later for the red carpet screening!

Chloe Grace Moretz is typically known for her unique and swoon-worthy fashion moments, which is why we had high expectations when we heard she was attending the Toronto International Film Festival. We have to admit, however, that the look she wore to the premiere of her film, Greta, was not what we had in mind. From the sheer polka dot planning to the pussybow detailing and heavy velvet, the entire look didn’t seem to flow together. 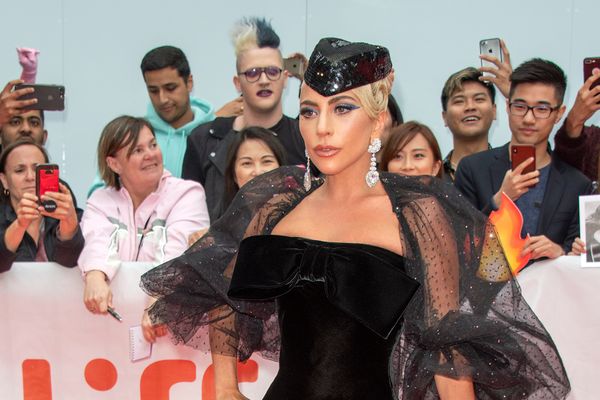