The annual Tony Awards took place on Sunday, June 9th, 2019 and brought together a group of A-list stars for an evening of honoring excellence in Broadway theatre. The event was held at the Radio City Music Hall in New York and a red carpet was held beforehand for arriving stars to show off their evening ensemble. While some stars dressed to impress, there were admittedly a few who missed the mark. Follow along as we rank all the red carpet hits and misses from this year’s 2019 Tony Awards:

Anna Wintour is one of the most acclaimed fashion editors in the world, which is why we were quite disappointed by her fashion miss at the annual Tony awards. The biggest problem with this look was that the green pattern of her dress clashed with the green backdrop of the red carpet. 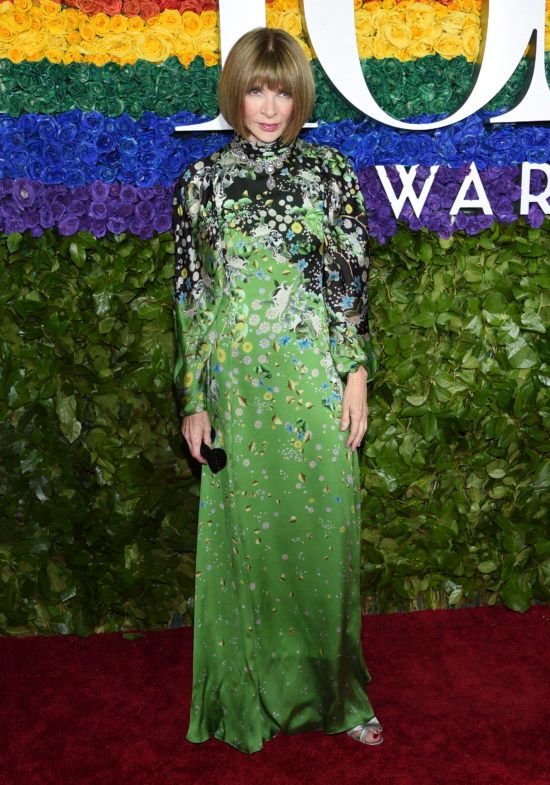 Laura Linney stepped out at the 2019 Tony Awards wearing a classy black dress that featured an asymmetrical neckline and silver metallic beading throughout. It was the perfect glitzy, yet sophisticated dress for the occasion. 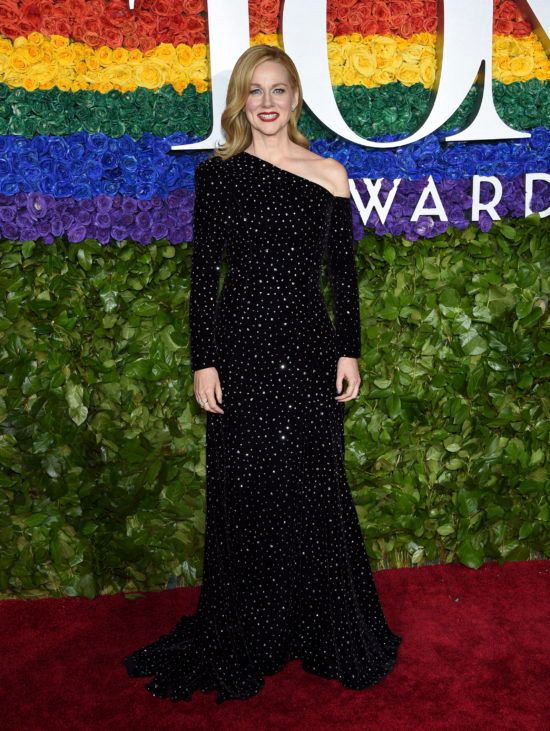 Danai Gurira stepped onto the Tony Awards red carpet wearing a golden Gucci look that we admittedly weren’t the biggest fans of. The look had a lot going on from the high neckline, bell sleeves, golden texture, and heavy print. 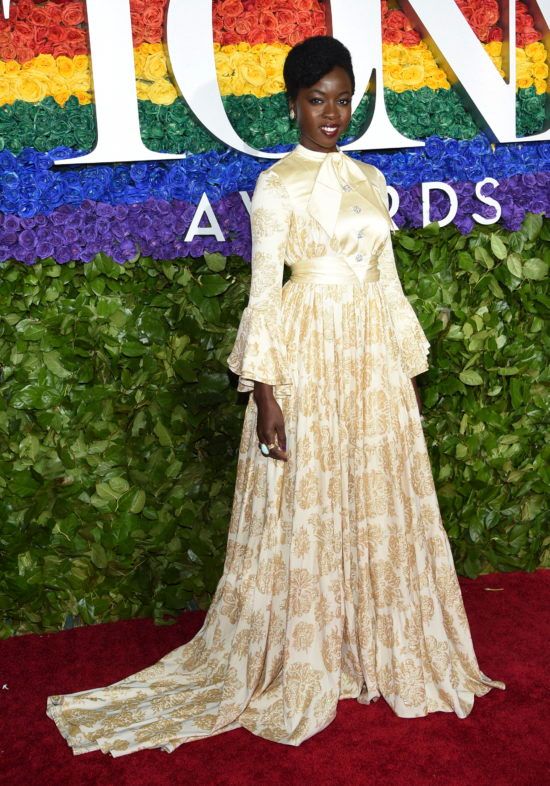 Laurie Metcalf stunned at the Tony Awards when she stepped out wearing a sleek white dress. The cape really brought the drama and amped up the little-white-dress look into something more elevated for the red carpet. 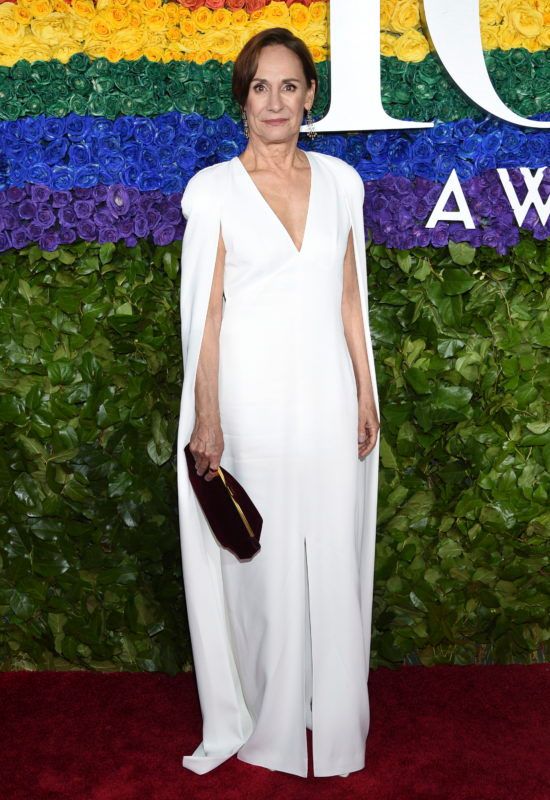 Vanessa Hudgens stepped out at the Tony awards wearing a grey minidress covered in beading. While we love the intricate beading of this look, it seemed to bunch and fold along the shoulder and hips, which was quite distracting. 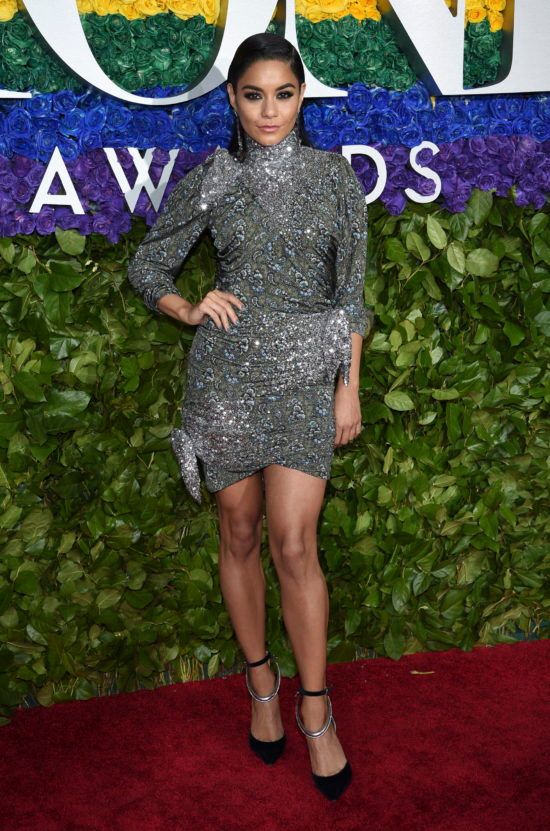 Celia Keenan-Bolger looked absolutely flawless when she stepped out for the Tony awards in a Cinderella-inspired dress. We love the combination of the pleated satin and soft tulle, which came together to make a truly glamorous red carpet moment. 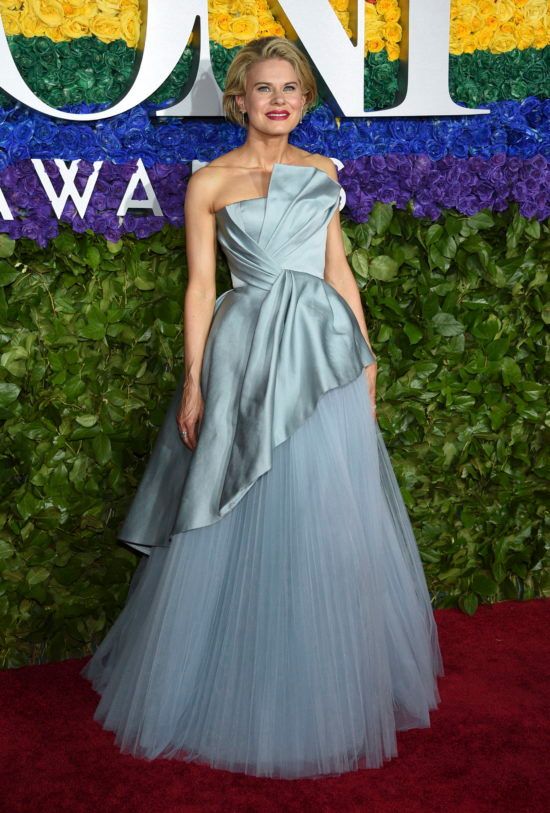 Tina Fey stepped out at the 2019 Tony awards wearing a golden suit that we felt missed the mark. The combination of the glitter and sporty stripes were a strange combination that we’re not sure totally worked. 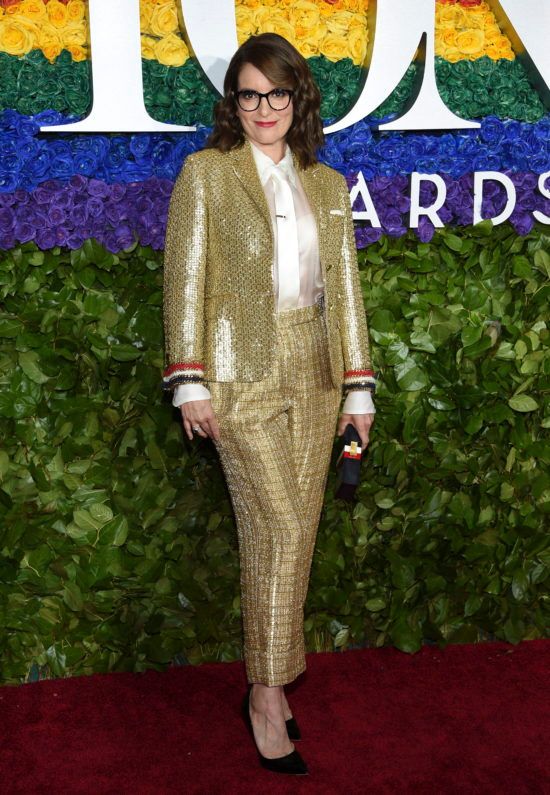 Samira Wiley stunned in an emerald green dress that featured a plunging neckline and thigh-high slit. This look fit her like a glove and the rich jewel-tone was super flattering on her skin tone. We also love the embellished edging of this look which added unique detailing. 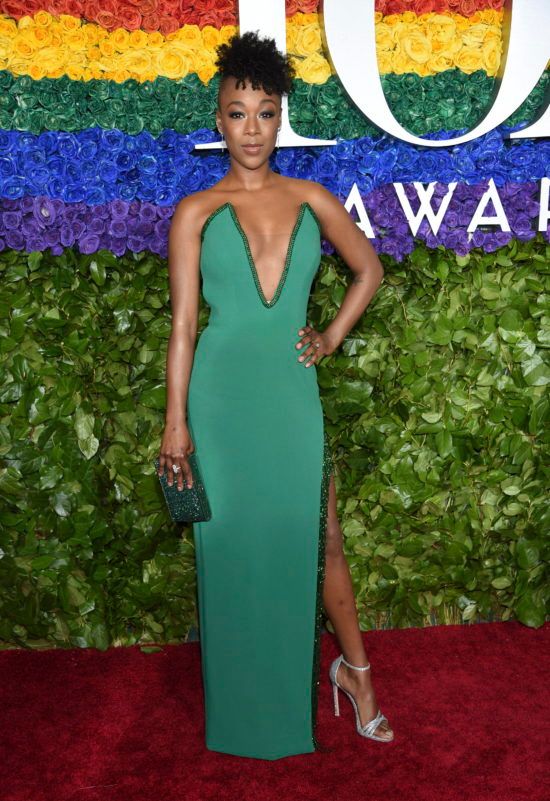 Sophia Anne Caruso stepped out wearing a tulle ballgown at the annual Tony awards that unfortunately wasn’t our favorite. The nude color seemed to wash out her fair complexion and the skirt had a little too much detail and layering. Marisa Tomei looked stunning at the Tony Awards where she wore a floor-length floral gown in shades of navy, green and fuschia. The bustier-detailing of the top really added a flattering, slimming effect. 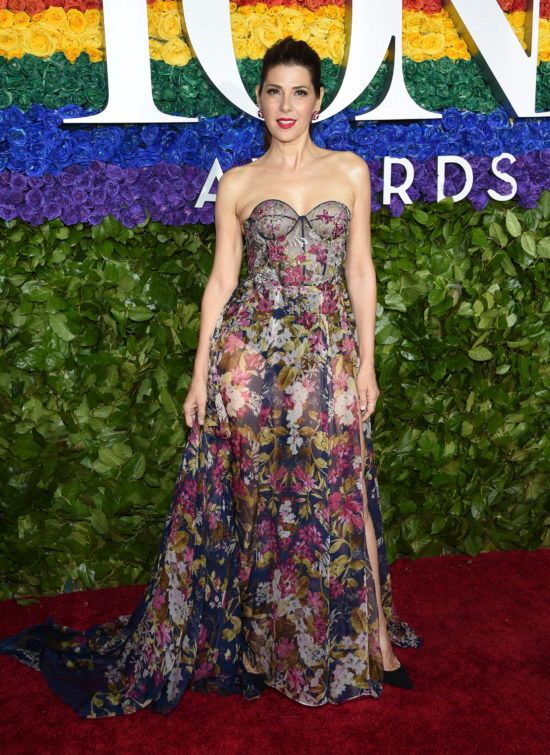 Lucy Liu stepped out at the 2019 Tony awards wearing an oversized purple dress which featured layers of tulle and ruffles. The look, unfortunately, seemed a little over the top and more suited for an experimental event like the Met Gala, which is why we felt it missed the mark! 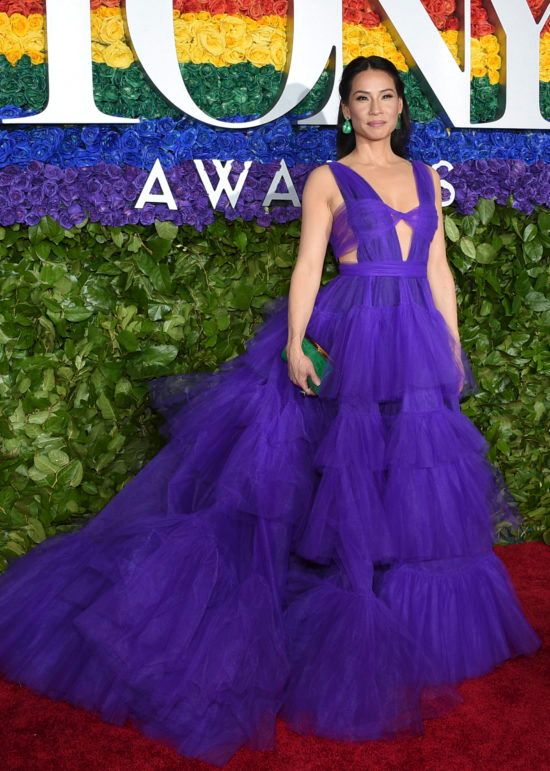 Rachel Brosnahan looked absolutely angelic at the Tony Awards this year where she wore a soft blue dress. We love the star-inspired beading on this look and how flattering the dainty belt looks to cinch in her waist. 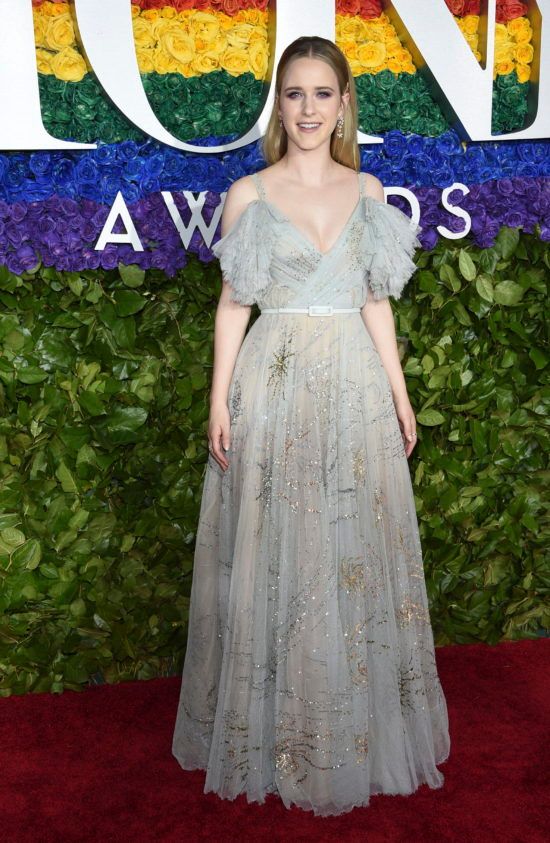 Cynthia Erivo went a little overboard with her look for this year’s Tony awards where she stepped out wearing a white dress with dramatic feathers on the chest and along the leg slit. We simply found this look quite overwhelming and felt that the heavy feather detailing was a little unnecessary. 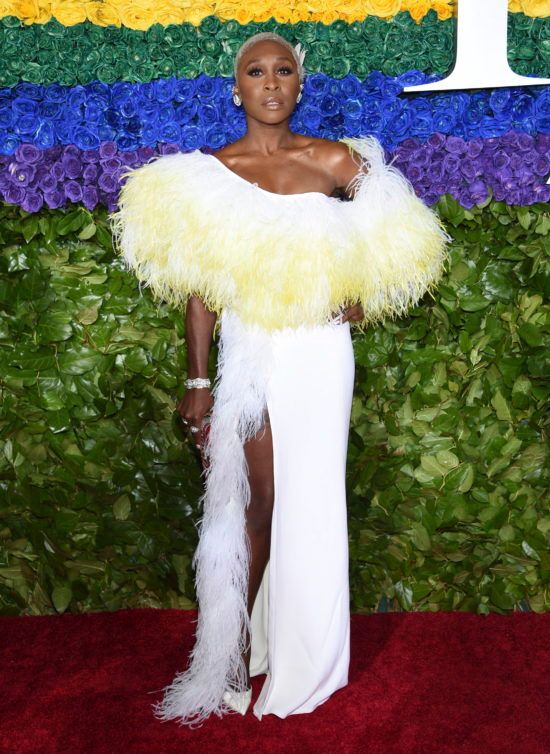 Of all the looks at this year’s Tony awards, our absolute favorite was the sleek, bubblegum pink dress that Regina King wore. The color was highly flattering on her skintone and the shape of the dress showed off her hourglass figure flawlessly. 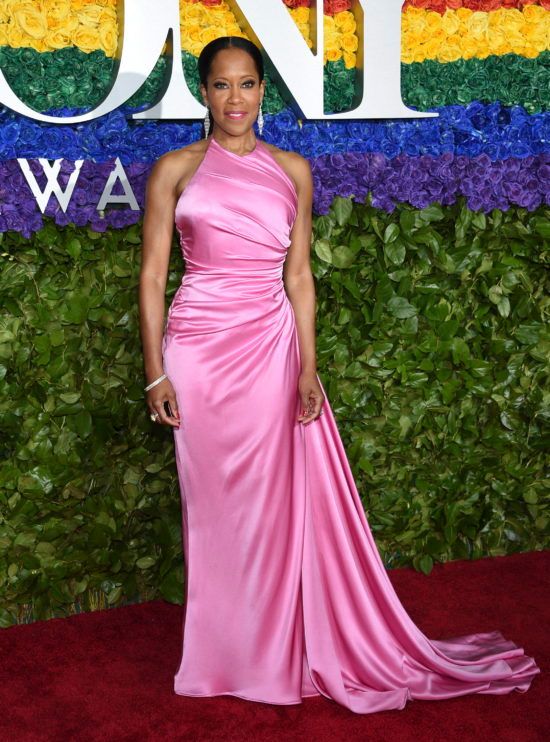 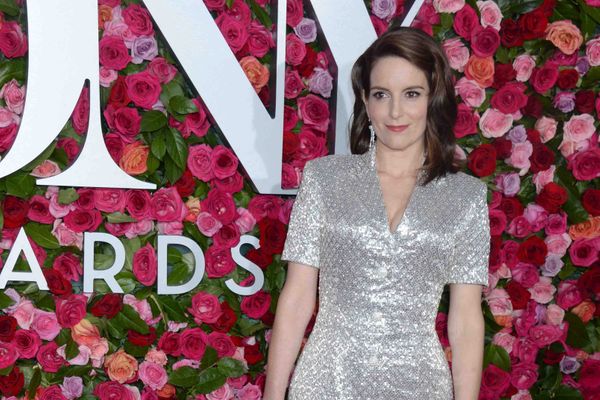