General Hospital (GH) has recast legacy character Brook Lynn Ashton with actress Amanda Setton. Brook will be back on the GH canvas on November 18, as reported by TVLine.

Brook was born in 1996 to Ned and his ex-wife Lois Cerullo (Rena Sofer). The character was SORASed in 2004 and was last seen on the soap in 2011, when she moved away to pursue a music career.

Brook also agreed to be Nikolas Cassadine’s (Marcus Coloma) date for business parties. She moved into his home and the two began to develop romantic feelings for each other. Even though they’d made love, the pair couldn’t make their relationship work and parted ways as friends.

Setton is the third actress to portray Brook. The character was previously played by Adrianne León and Brooke Radding. She’s no stranger to soaps, as she played troublemaker Kimberly Andrews on One Life To Live from 2009 to 2011. Setton has also appeared in several primetime shows including The Crazy Ones, Gossip Girl, The Mindy Project, Blue Bloods and Hawaii Five-O.

How will Brook’s return affect the residents of Port Charles? And will she force Nikolas out of hiding? Stay tuned to GH to find out!

Want more GH spoilers? Sign up for Fame10’s weekly soap opera spoilers newsletter or check out our GH spoilers for the week of November 11, 2019:

GH spoilers tease that Jax and Carly will come to an agreement of sorts this week. Could this be about Josslyn’s living arrangements? They tried to settle this recently, but Jax was very apprehensive about having his daughter around, and fans know this has to do with house guest Nikolas Cassadine.

Or, their agreement could have to do with something else? GH spoilers indicate that the exes will agree to something, but it will involve keeping Sonny out of the loop. Will Jax confide in Carly about Nikolas being alive? Will he potentially ask for her help to convince Sonny to refrain from cutting Ava out of Avery’s life? She did, after all, see Nikolas, even though she believes that her mental health is deteriorating.

GH spoilers tease that Chase will try and give Robert some advice this week. He’ll want to help him around something, so could this have to do with a police investigation, or does this have to do with Anna Devane? Could it be that Scorpio believes that Finn’s daughter drama is not a good scene for Anna, and Chase defends his brother? Chase may offer his two cents to Robert, regardless.

GH spoilers reveal that Finn will try and iron out things with Hayden this week, as it relates to their daughter. He obviously wants to be a part of Violet’s life, and he may want to take a more active role as a dad. In related teasers, Finn will confide in Liz this week, telling her that he believes there are a ton of things he and Anna need to sort out when she comes back. No kidding …

Speaking of Elizabeth, GH spoilers hint that she’ll take Cameron and pay a visit to Sonny. Perhaps a little time at his gym will help keep his body moving in order to keep his mind focused on what’s important. With Franco lingering there (now and again) as well, maybe they run into him during the visit?

Valentin will be all over the place this week, as GH spoilers suggest he’ll get a weird phone call. Nikolas perhaps? In other teasers, Jason Morgan will pay Cassadine a visit, which doesn’t sound like a good thing in Valentin’s case. There is one good thing that will happen to him this week, he’ll find some common ground with Lulu.

Seems as if Valentin won’t be the only one Jason confronts this week. GH spoilers indicate that he’ll want to pay a visit to Jax as well, and it seems he won’t be too pleased with the Australian. Rounding out teasers for Jason, by week’s end, he’ll give a statement of sorts

GH spoilers indicate that Monica shows Kim a little kindness this week. Nero is struggling right now, and being judged all over town. Monica understands just how hard it is to lose someone you love, especially a child. Could Monica extend this kindness in the form of words and support, or a job at the hospital?

Lulu will go into full-blown panic mode this week, and Nina will become frantic as well. Could these spoilers be related? They do happen within a day of each other. Meanwhile, Jordan will find something quite curious, and TJ will provide some answers in the form of a diagnosis … could he help Alexis with her illness woes? 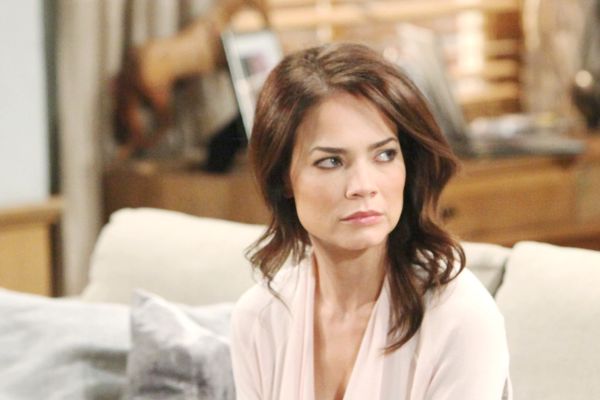