Are JoJo And Jordan Still Together, Engaged After The Bachelorette 2016?

With The Bachelorette’s season 12 right in the midst of all the drama, fans can’t help but wonder who is JoJo Fletcher going to choose?

Right away it was clear she was very interested in Jordan Rodgers, but after last week’s episode many are questioning his honesty because he wasn’t very convincing when she questioned him about cheating on girlfriends in the past. In tonight’s episode the remaining group goes to Buenos Aires, Argentina and JoJo’s prospective loves go from 8 to 6, but many are still wondering, is it really Jordan she picks?

Are JoJo Fletcher And Jordan Rodgers Together, Engaged After The Bachelorette 2016?

Reality Steve has all of the details of the entire season, right down to eliminations, and yes, her final rose. Tonight JoJo will say goodbye to Wells Adams and Derek Peth, leaving Chase McNary, Robby Hayes, Jordan Rodgers, James Taylor, Alex Woytkiw and Luke Pell as her final six. According to Reality Steve from there Robby, Chase, Luke and Jordan make her final four, and in the end it all comes down to Robby and Jordan.

Despite all of the drama and questionable motives concerning Jordan, JoJo does select him and they do become engaged. While it is harder to determine if they are still together right now, it sure seems that way, but unfortunately, Reality Steve is speculating it is only because Jordan wants all of the media attention that comes from doing the press tour as an engaged couple. We will just have to wait to see what really happens with the couple! 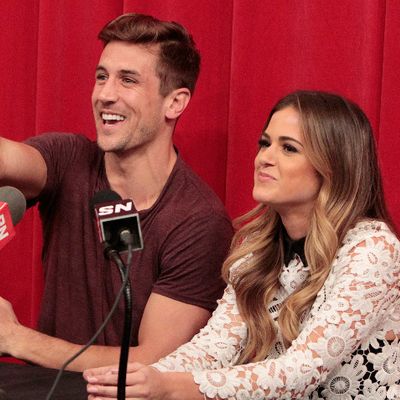