Season five of Bachelor in Paradise ended in a dramatic fashion, with breakups and engagements, but the fallout afterward was even more shocking.

Contestants Jordan Kimball and Jenna Cooper ended the season with a proposal, and the pair were already in the midst of planning their wedding set to air on TV when spoiler king Reality Steve dropped a bombshell of text messages that seemed to prove Cooper was cheating on her fiance.

The text messages in question seemed to show Cooper talking to an unidentified man and writing, “Me and Jordan aren’t together for real. I don’t even like him let alone love him. I’m better than him and once I’m able to I’ll break it off for good and make up some story to make him look bad if it’ll make you feel better. He means nothing to me and never has.”

“It felt like a body drop,” Kimball told PEOPLE of learning about the allegations. “I got taken down. I’m weak in the knees and I feel like I have rocks in my stomach.” In a statement of her denial Cooper said:  “I am aware of the allegations being made against me and they are simply untrue. I am choosing to focus on my relationship right now. Thank you for respecting my privacy at this time.”

Meanwhile, Kimball added that he spoke to his fiancee and revealed he believes those are her texts, and he is heartbroken.

“On Monday, I saw something someone posted on Twitter — that somebody was going to be roasted the next night,” he said. “Jenna called me and said she was very anxious about this Twitter post. I talked to her in the middle of the night last night – I said don’t hype yourself up, don’t worry, you have nothing to worry about. I tried to calm her. I went back to bed for a few hours, woke up, had my coffee and she called me again and said she was anxious and felt sick to her stomach.”

Kimball continued, “She’s in New York. I told her to keep calm. I thought she was just being nervous for no reason. Then I was driving back to Central Florida from Miami and I started getting calls from castmates like Chris Randone. I started getting screenshots sent to me. I didn’t know what to think. I sank in my seat.”

I know my Jenna, and I read those texts and in my heart, I know it’s her,” he added. “She was saying she didn’t do it, but hinting towards the fact that there’s a possibility that it happened. In all reality, I don’t expect her to own it.”

“If this whole thing sticks, and it’s true, I will be hurt much more than the depths of romance,” says Kimball, who had been planning an engagement party. “I will be hurt as a person and as a friend. There are so many layers to a relationship and right now I feel all of them peeling back.”

Kimball added that there is no question his feelings for Cooper were real, despite whatever she may or may not have felt for him. “This was not a TV romance. This was real. And whether you like me or not, I deserve love. I found it, and this is what happened. So, for the sake of anyone who’s ever been in love, be understanding.”

Despite believing Cooper might be cheating or faking the romance altogether, Kimball would not clarify whether or not the engagement is off.

“I don’t know how to handle this. All I know is I obviously only knew a limited amount of information about Jenna. This is embarrassing and it hurts my pride. And our friendship is just tarnished. I don’t even know what piece to pick up or how to put it back.” 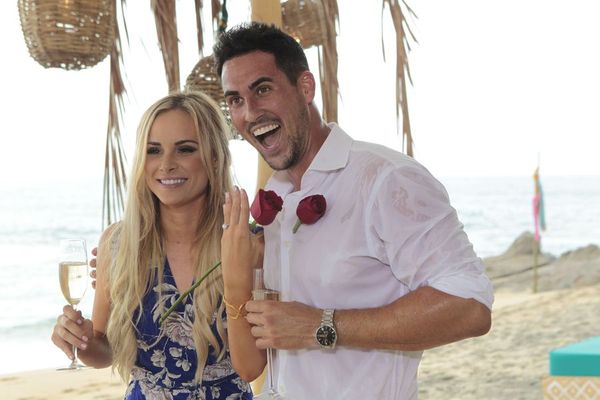