After a week of silence and uncertainty, The Bold and the Beautiful (B&B) actor Tanner Novlan has confirmed that his time on the CBS soap is over.

That confirmation also means that John “Finn” Finnegan truly passed away after being shot by his birth mother, Sheila (Kimberlin Brown).

“Brad [Bell, executive producer]  gave me a call personally and told me where the character was headed,” Novlan told Soap Opera Digest in their new issue, “and yeah, I was pretty surprised.”

“But, that’s the nature of a soap opera,” he reasoned. “Anything can happen at any time, and that’s ultimately what keeps people engaged with the show.”

It’s hard to argue that point! Viewers are still stunned by the grisly turn of events, with many refusing to believe that the character is truly gone.

Still, Novlan wasn’t the only one taken aback by the direction of the soap.

“Everyone was pretty surprised, especially Jacqui [Jacqueline MacInnes Wood; Steffy],” he added. “She was super-surprised because we have so many great ‘Sinn’ fans. She was speechless and I said, ‘Well, I think that’s the point of it’.”

Luckily, Novlan had a lot of support, both at home from his wife Kayla Ewell (who played Caitlin Ramirez on B&B) but also on the set.

“Everyone was very supportive,” the actor continued. “They are a great family and we’ll remain friends. You don’t go on a show like B&B and not create great relationships.”

As it turns out, this was Novlan’s first time playing a deceased person – and it was a lot tougher than he expected!

“I’m thinking as an actor, ‘Well, this will be an easy day because I get to lay there the whole time and I normally don’t get to do that’,” he reflected. “But it was actually kind of uncomfortable.”

With Finn’s passing, viewers are now wondering if this was the major plot twist promised by producers over the past month. And while he refused to sound off on what’ll happen next, he realizes that his character’s demise will leave a crater on the show.

“This is the ultimate twist,” he reflected. “I don’t think anyone could see this coming and yes, it is heartbreaking. Unfortunately for Finn, one of his values is having faith in people. Now, that comes back to bite him in the worst possible way.” 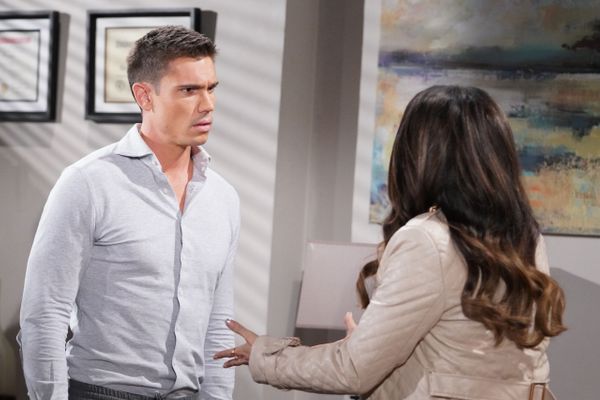 We Weigh In: What Will Finn’s Demise Trigger On B&B?