CBS soaps Bold And The Beautiful (B&B) and Young And The Restless’ (Y&R) last original episodes will air on Thursday, April 23.

That doesn’t mean the sudsers will be off the air, however. CBS plans to replace new episodes with vintage ones, according to TVLine.

“It’s incredibly fun to offer fans an opportunity to look back at such memorable moments from Y&R and B&B,” said Amy Reisenbach, EVP of CBS Current Programs. “Both of these shows have extraordinary legacies, and these specially curated episodes are only a small portion of what we hope to be able to present in the coming weeks.”

Beginning on April 27, the Y&R and B&B will run theme weeks. Next week, the Y&R will present vintage episodes centered on the late great Katherine Chancellor (Jeanne Cooper). The B&B will feature episodes that were filmed on location in Monte Carlo from 2013 to 2017. They will also run two episodes that will include behind the scenes details of these shoots.

It’s not known when the production halt will end, and the cast will begin filming again. Fame10 will keep you updated!

Calling all Young and the Restless (Y&R) fans! Who’s ready for another exciting week in the land of Genoa City? Sharon will feel the love from those closest to her, while Victor tries to do some damage control, and Jack offers up some motivation for Phyllis. Learn about these storylines and others in the Y&R spoilers for the week of April 20, 2020.

Y&R spoilers indicate that Sharon will reach out to Nick this coming week, for some help. Does she need his support when it comes to activities at Crimson, or maybe with Faith? Either way, Nick will certainly come through for her. She’s struggling right now, and as a friend, Nick wants to do all he can to support her.

8. Friends And Loved Ones Show Support

In other Sharon news, it seems as if Sharon’s loved ones will rally around her this week to show support. Could Sharon confide in Nick this week, leading him to gather all of her loved ones in an effort to let her know they are all behind her? Sharon could use all the encouragement she can get at this point.

Across town, Y&R spoilers hint that the Moustache will be busy working on damage control. Could this be in regard to Vicky or Adam? Victoria doesn’t seem like she is letting go of getting back at Adam, and this may cause Victor to scramble a ton. He doesn’t want the truth to come out.

6. Victor’s Back In The Driver’s Seat

Whatever damage control he does this week, seems as if Victor will wind up back on top. Y&R spoilers hint that he’ll regain control, and one can’t help but wonder if this means that he’ll to turn the tables on Adam, and snatch that CEO position right from under him to hand it back to Vicky.

So, Victor gets back in the driver’s seat this week, but at what expense? As viewers hit next weekend, Y&R spoilers indicate that a secret will surface about the Newman family – one that undeniably will rock everyone’s world. So, while Victor will be in control, things will seemingly crack along the edges.

4. Kyle Doesn’t Back Down

According to Y&R spoilers, Kyle will fight back against something in the coming days. He recently fired Theo, so will he be questioned on this by Jack? Could Jack try and overturn Kyle’s decision, thus causing him to “fight back” around his motivation behind Theo’s dismissal? This could be the case, and it seems as if Kyle will not be willing to back down.

Speaking of Jack, he’ll do something really good this week and help to motivate a friend. Y&R spoilers reveal that Jack will inspire Phyllis in some way, and perhaps he lends some words of encouragement. He’s always had such a soft spot in his heart for her, despite their stormy past.

On to some feel-good Y&R spoilers, friends and loved ones will gather in the coming days to celebrate Chloe and Kevin’s growing family by throwing them a baby shower! Interesting note, while Chloe is still pregnant on the show, actress Elizabeth Hendrickson is enjoying mommyhood right now (in full force), after welcoming her baby girl into the world this past March 28th.

Lastly, Amanda and Nate will continue to get a little closer this coming week, as Y&R spoilers reveal that their relationship will blossom. Does this mean they take that next step in the bedroom? Or, perhaps the two will just notch some more romantic dates under their belt. Either way, fans may expect sparks to fly between these two! 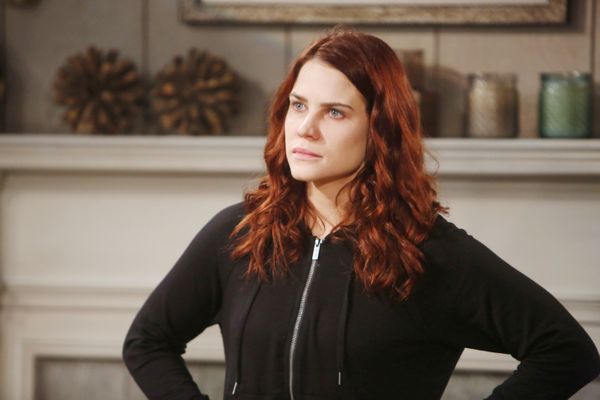