On Sunday, January 19, Brad Pitt was awarded the Male Actor in a Supporting Role award at the 2020 SAG Awards for his role in Once Upon a Time in Hollywood.

The 56-year-old actor stood on stage with a smile after receiving a loud round of applause from many famous faces in the room – including his ex-wife Jennifer Aniston.

“I’m going to add this to my Tinder profile,” Pitt began. “Thank you, my brothers, my sisters. This means so much — more than I can possibly fathom. I want you to know I watch everything. I watch you all, and the work has been mesmerizing. So I thank you. I want to thank my co-stars — Leo [DiCaprio], Margot Robbie, Margot Robbie’s feet … Seriously, Quentin [Tarantino] has separated more women from their shoes than the T.S.A.”

He continued, “We all know what we do is a team sport, and we elevate each other. And I got to work with some amazing people. Mr. [Al] Pacino, Mr. [Bruce] Dern, Kurt Russell, Leo, Dakota [Fanning], Tim[othy Olyphant]. Where are you guys? Ms. [Julia] Butters. Margaret Qualley. Austin Butler. You elevated my game. I certainly hope I did the same for you. Let’s be honest. It was a difficult part. A guy who gets high, takes his shirt off and doesn’t get on with his wife.”

Aniston, who also later won a SAG Award for her lead role in The Morning Show, laughed out loud at Pitt’s candid joke. They were married from 2000 to 2005.

In the past, Pitt has received seven SAG Award nominations for his lead roles in The Curious Case of Benjamin Button and Moneyball, as well as his supporting roles in Babel, Inglorious Basterds, 12 Years a Slave and The Big Short. In 2010, the actor and his Inglorious Basterds costars won the Outstanding Performance by an Ensemble in a Motion Picture prize. 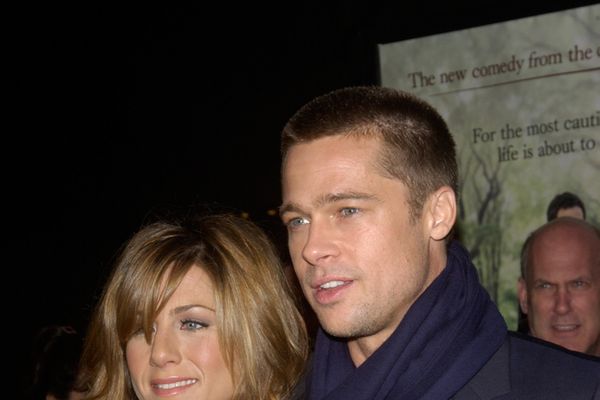