Awards season is finally here! A few weekends ago, we had the Golden Globe Awards and this weekend is the Screen Actors Guild Awards. We are super excited to see who wins, who loses and who rocks the red carpet best. Of course, we are also excited for who ends up on the worst dressed lists, but that goes without saying. We’ve been reminiscing about what stars rocked the red carpet at the SAG Awards best. There have been a lot of great fashion moments and we want to relive some of the best and brightest. In anticipation of this weekend, here are the best dressed from years past!

Michelle Williams looked lovely at the 2012 Screen Actors Guild Awards in this red asymmetrical Valentino gown. The dress featured a gathered waste, as well as lace details on the shoulders. She accessorized with Roger Vivier ‘Cage’ sandals, a Lanvin ‘Red Passion’ minaudiere and Fred Leighton jewels. This color is perfect on the “Blue Valentine” star. It really warms her face. She usually doesn’t go for bold colors like this. We mostly see her in things that are pastel-colored, which really washes out her out, so a nice vibrant color like this was a real treat.

Williams was up for the Best Actress award for her performance in “My Week with Marilyn” at the SAG Awards. While she was able to nab the Golden Globe for this role, she didn’t take home the Screen Actors Guild Award. Viola Davis did for “The Help.” She also lost out on the Academy Award. Meryl Streep took that one home for her work in “The Iron Lady.”

Amanda Bynes may be a train wreck now, but she wasn’t always this way. At the 2008 Screen Actors Guild Awards, she was one of the best dressed celebrities. She wore this strapless, teal blue Marchesa Resort 2008, which featured silver jewel embellishments and cascading layers. We love the dress and we love her hair. Styling it in loose waves with a couple of braids was a fantastic idea. She looks so fresh and ethereal. We miss this.

For the past few years, things have been going downhill for the former child star. She retired, had a few DUIs and has been placed on an involuntary psychiatric hold twice. According to her, she was diagnosed with Bipolar Disorder, but she’s been taking her medication and seeing a psychiatrist regularly. Let’s hope that 2015 is a better year for her than 2014 was. We really miss the old Amanda Bynes. She was a lot more interesting.

No one does fashion quite like Kerry Washington. Case in point – her gown at the 2013 Screen Actors Guild Awards. She wore this white, jewel-embroidered Rodarte gown, which featured silver-lace detailing around the hemline and the back of the dress. To polish off her look, she wore Fred Leighton jewels, white python Christian Louboutin ‘Batignolles’ pumps and picked up a metallic snakeskin Judith Leiber box clutch. Washington certainly gets fashion. This dress is so structured, so simple and yet so beautiful.

The “Scandal” star wasn’t up for any awards that night, but that didn’t stop her from dressing to the nines. With fashion, one can always expect something good from her; however, the 2015 Golden Globes were an exception. The two-toned Mary Katrantzou dress was a mistake. Not only did it look really uncomfortable, it wasn’t even that stylish. Let’s hope she learned from that for the Screen Actors Guild Awards this year.

In 2009, January Jones was one of the best dressed celebrities on the red carpet at the Screen Actors Guild Awards. She donned this Andrew GN Spring 2009 halter gown, which featured an ornate golden neckline, with matching gold hoop earrings. This is a pretty classic look; however, the gold detail makes it one of a kind. At this point in her career, the “Mad Men” star wasn’t even working with a stylist. She just has an innate understanding of fashion.

Jones, along with her cast mates from “Mad Men,” took home the Outstanding Performance by an Ensemble in a Drama Series Award that year at the SAGs. She was also nominated for a Best Actress in a Television Series (Drama); however, she didn’t end up winning. Many people have questioned her level of acting talent, which is a shame since she is able to do the icy blonde thing to perfection.

Emma Stone rocked the 2012 Screen Actors Guild Awards in this black, tea-length Alexander McQueen Pre-Fall 2012 dress, which featured a lace bustier and a wide A-line skirt. She finished the look with a black and gold McQueen clutch, as well as black peep toe platform sandals with an ankle strap, which were also by Alexander McQueen. This is definitely not your conventional awards dress, but it still works – really well in fact.

The “Easy A” star and her cast mates from “The Help” were nominated for Outstanding Performance by a Cast in a Motion Picture Award that year at the SAGs and they ended up winning. The film had a killer cast, which included Viola Davis, Bryce Dallas Howard, Octavia Spencer and Jessica Chastain. This year, Stone has been nominated for a Screen Actors Guild for Best Supporting Actress for her performance in “Birdman.” We can’t wait to see what she wears!

At the 2011 Screen Actors Guild Awards, Mila Kunis wore this Alexander McQueen chiffon bustier dress, which featured a sweetheart neckline and a train. She completed her look with Cartier jewels and a clear waistband and styled her hair in loose, tumbling waves. We love this dress on her and we miss that time period. She was constantly at awards shows and movie premiers and we saw one great dress after another on her.

The 2011 SAG Awards were a pretty big deal for Kunis. She had been nominated for a Best Supporting Actress Award for her role as the rival ballet dancer in “Black Swan.” She was also nominated for a Golden Globe for her performance. She didn’t win either award. She lost both awards to Melissa Leo for her role in “The Fighter.” Oh well. At least, the former “That 70s Show” star looked better on the red carpet. Leo’s dress was a mess.

Diane Kruger stunned in this mustard-colored Jason Wu gown, which featured a draped shoulder, at the 2010 Screen Actors Guild Awards. She accessorized with Harry Winston earrings and a crimson clutch. She’s pretty fashion forward on the red carpet; however, she can do old Hollywood glam like it is nobody’s business. Kruger’s gown is kind of reminiscent of the yellow Vera Wang dress that Michelle Williams wore to the 78th Annual Academy Awards. Both gowns are beautiful.

Although the model turned actress was up for a Best Supporting Actress that night for her role in “Inglourious Basterds,” she didn’t end up taking the award home. She did, however, end up taking home the award for Outstanding Performance by a Cast in a Motion Picture, along with the rest of the cast from the film. She rarely gets nominations for her movie roles, so taking any award home is a pretty big deal.

At the 2013 Screen Actors Guild Awards, Naomi Watts wowed in this strapless Marchesa gown, which featured silver metallic embroidery and crystal embellishments. She finished the look with a matching silver clutch, Christian Louboutin grey satin ‘Angelique’ peep-toes and Faberge jewels. We love this look on her. It is so delicate, but elegant at the same time.

That night, Watts had been nominated for the Outstanding Performance by a Female Actor in a Leading Role award for her role in “The Impossible.” Despite the fact that critics raved about her performance in the film, she ended up losing the award to Jennifer Lawrence, who ended up winning the Oscar, the Golden Globe and the Screen Actors Guild Award for her role in “Silver Linings Playbook.” Lawrence is a force to be reckoned with. It doesn’t matter what she does – she always gets nominated for the big awards. When it comes to fashion, however, Watts definitely has her beat.

Amanda Seyfried dressed to impress at the 2013 Screen Actors Guild Awards. She rocked this strapless midnight blue Zac posen Pre Fall 2013 gown, which featured a sweetheart neckline, a cascade of tiered layers and a train. She completed the look with a Lorraine Schwartz pendant. Over all, this is one of the best looks to ever hit the red carpet at the SAG Awards. The gown itself is just stunning. The color is fabulous and it really shows off what a great figure Seyfried has.

According to the “Les Miserables” actress, she has to work pretty hard to keep her lithe frame. This includes exercising for an hour a day and occasionally doing the raw diet for a week, just to cleanse. She tries not to overdo any of this. Like any sane person, she loves sugar and doesn’t want to imagine a life without coffee. Whatever she’s doing, it’s obviously working! 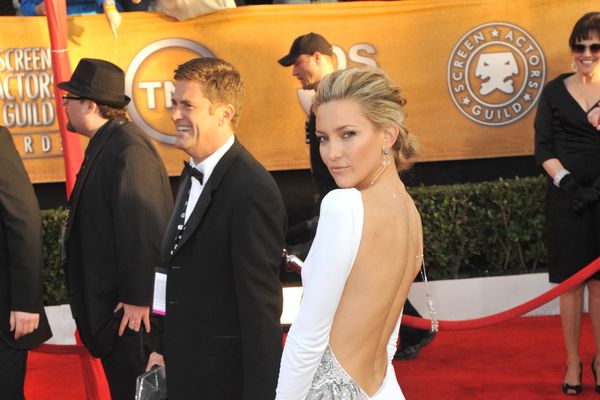