If you’ve got a big secret, don’t tell Brad Paisley!

The country star took the stage at the CMA Awards alongside Carrie Underwood this week, dropping the bomb that she’s expecting a baby boy with husband Mike Fisher.

“We’re pregnant,” Paisley said onstage, begging, “Can you please just tell me what we’re having?”

After Carrie whispered something in his ear, Brad said, “I’m so happy! I know something y’all don’t know.”

Later, Brad suggested, “We could name him Garth,” referring to country music legend Garth Brooks, whom Carrie said she wanted to “sign my baby.” Brad also took a selfie with Garth and posted it on Twitter with the caption, “Wanna see my Garth selfie just before I let the cat out of the bag? Lil’ Garth Fisher. Just sayin’ #bradblewit”.

But at the mention of the word “him,” Carrie got upset. “What are you doing?” she exclaimed. “What’s wrong with you? You gotta be kidding me. You kept that secret for a whole two minutes.” Now, everyone knows that Carrie is expecting a boy.

We’re not sure if the incident was a pre-meditated gag or if Brad really did spill the beans when he wasn’t supposed to, but we doubt Carrie is mad at Brad.

Before the show, she took to Twitter to post photos of the gifts he gave her. “Flowers, baby goodies & non-alcoholic wine (grape juice) from my best friend @IveyCake & best co-host @BradPaisley,” she wrote with a smiley face. 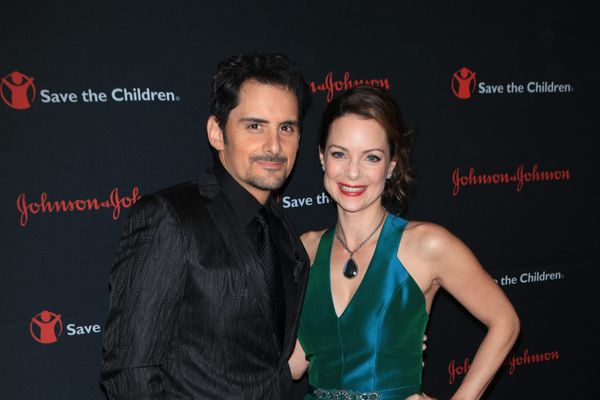