The Country Music Awards in Nashville, Tennessee are a huge event for all of country music’s hottest stars, but even hotter then the music being celebrated are the genre’s best couples!

The arrivals red carpet had everybody showing off their best looks, but sometimes part of that best look was being matched up with their significant other.

Country music’s King and Queen, Blake Shelton and Miranda Lambert arrived ready to shake off any “relationship on the rocks” rumors looking spectacular and happy as they posed for pictures.

Blake looked country casual with his black jacket, vest and tie with a grey shirt matched with his typical blue jeans and cowboy boots and his goofy smile, of course the best part was the lady on his arm, with Miranda looking stunning.

Australian couple Keith Urban and actress wife Nicole Kidman arrived looking happier then ever after Kidman revealed to the world just how much her husband means to her and that they even write love letters to each other.

Urban looked great in all black ensemble right down to the shoes while wife Nicole lightened up the duo with an all white embroidered gown.

Keith enjoyed success for winning in the Musical Event of the Year category for his song with Miranda Lambert, “We Were Us.”

Entertainer of the Year winner Luke Bryan arrived already looking a winner with wife Caroline on his arm.

Bryan looked sexy as ever in his classic black and white suit but Caroline stole the show with her all white gown, embroidered around the waist and arms, not to mention a super chic slit, clearly Luke has it pretty good.

Married for eighteen years and Tim still only had eyes for his gorgeous wife. The stylish couple made sure to match with McGraw wearing a classic black tux complete with signature black cowboy hat, while Faith dawned a brand new pixie cut and a black and nude sequined gown.

Jason looked more ready for a night at the bar with his cowboy hat, ripped blue jeans, unbuttoned black shirt and brown leather jacket but Brittany looked great in a plunging black gown with a gold beaded headband.

The couple looked happy aside from stirring up the country world two years ago when the were spotted kissing while Aldean was still married to his wife. 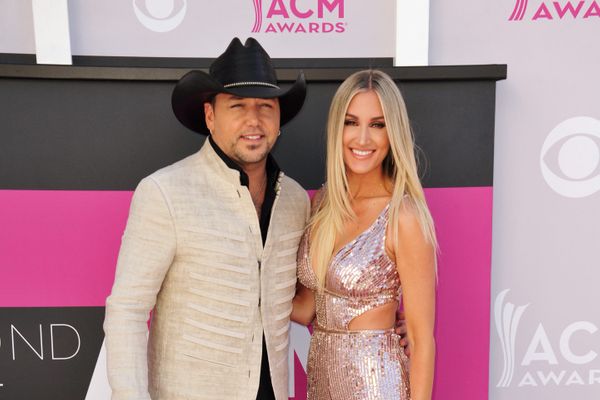