Courteney Cox has so much time on her hands, that she decided to binge-watch the very show that made her famous!

Cox made an appearance on Jimmy Kimmel Live!‘s at-home YouTube show on Wednesday, March 25, and revealed that she has been binge-watching Friends.

“I decided during this time — people love the show so much — I decided to binge-watch Friends,” Cox said.

The Friends star said one thing that stresses her out is when people ask her to participate in Friends trivia.

“I don’t even remember even being on the show. I have such a bad memory,” Cox admitted. “I remember loving obviously everybody there, and having fun, and I remember certain times in my life that I was there. But I don’t remember episodes. I would never pass. I fail every test.”

However, she swore that “by the end of this quarantine I’m going to know so much more.” It’s possible that with the on-going public health and safety concerns, Cox could get through all 10 seasons of Friends and become a Friends expert by the time this situation is over.

Of course, in Kimmel fashion, the host put Cox’s memory to the test and pit her against the biggest Friends fan ever! Kimmel brought in his superfan cousin Anthony to compete head-to-head with Cox. To make things easier for the Friends star, they only did trivia questions centered around Monica Gellar, the character she played on the beloved sitcom.

However, Cox still couldn’t get one answer right when it came to questions like the name of Monica’s parents, when she learned to tell time, and many more.

“Ross [Monica’s brother] was my first kiss? What episode was that?” Cox asked. 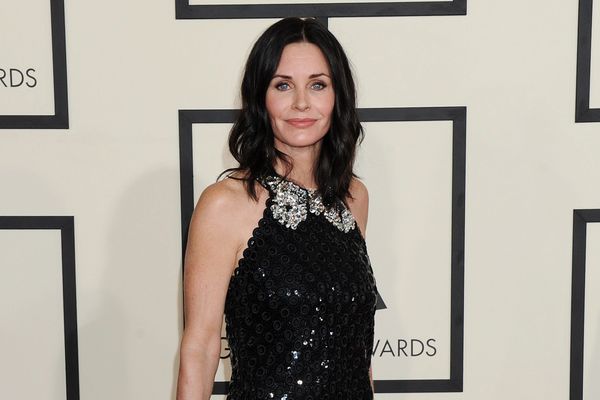