The increased use of flashback scenes on General Hospital (GH) recently is no accident. It’s a way for producers to extend banked original episodes even further.

Production was halted on GH on March 16 and by incorporating the flashbacks, showrunners can turn one episode into two. Since early April, the ABC sudser has also run a weekly encore episode they’ve dubbed Flashback Fridays, to prolong new episodes even further.

GH isn’t the only soap that will eventually run out of original episodes. New episodes of Bold And The Beautiful and Young And The Restless will run out on April 23.

Some GH fans have enjoyed watching the extra recollections, commenting that it adds more context to current storylines. But, as the old saying goes, you can’t please everyone all the time, and some viewers have complained about the increase in the use of analepsis.

“We’re going through difficult times,” Tristan Rogers, who plays Robert Scorpio on GH, posted on Twitter. “The show is going to weave and bob, not to your liking. The important thing is we keep it going. The alternative is most unpleasant.”

There’s still been no word on how long GH will be able to air original episodes. Fame10 will keep you updated!

Calling all General Hospital (GH) fans! Time for another exciting week in the land of Port Charles! Sonny will be taken aback, while Robert shares some grave information, and Sam is apologetic. Learn about these storylines and others in the GH spoilers for the week of April 20, 2020.

Something is about to hit the proverbial fan! GH spoilers hint that Sonny will be taken aback this week. Does it have to do with his dad Mike? In other related teasers, Corinthos will miss a meeting he scheduled with Cyrus. Could he suffer the repercussions of doing this in the coming days? Lastly, as the week winds down, Sonny will confide to Jason about something.

According to GH spoilers, Jerome will grab the attention of someone unwelcome in the coming days. With Sonny taken aback regarding something, could he be on to Julian and his role with the baby switch? Or, could someone else be on to Jerome? He may be caught in a sticky situation.

Michael will continue to worry about Wiley in the coming days. In fact, GH spoilers suggest he’ll be so wound up that he won’t be able to leave his son’s side. Michael has stepped up incredibly when it comes to Wiley, and there is nothing he won’t do for his son.

As per GH spoilers, Willow might get some upsetting news that leaves her devastated. Could this be about Wiley? Or could Nelle be up to something that leaves Willow re-thinking her potential marriage to Michael? Maybe something happens where Willow decides to change that “no” to a “yes”?

It’s official! Nelle is Nina’s daughter, and in the coming weeks, it seems as if there is a good chance that Nina will get a little closer to her offspring (without really knowing she’s her offspring). GH spoilers reveal that Nina will learn that much more about Nelle these next few days. Perhaps she continues to understand the reason why Nelle is so toxic.

Across town, GH spoilers indicate that Sam will reach out to Alexis with an apology. While these two sometimes don’t see eye-to-eye, at the end of the day, they are as close as a mother and daughter duo can get. In other Sam teasers, she’ll cross Brando this week. Does this mean she oversteps, or do they simply have an encounter? A pretty interesting, yet cryptic, spoiler.

GH spoilers suggest some somber news given by Robert Scorpio this week. Will he have some negative things to report to Liesl about, or will it be to someone else? While Robert has his eye on Peter, he’s also helping Laura out with the Cyrus situation, so this could really be about anything at this point.

GH spoilers state that Valentin will be caught off guard in the coming days. Seems like he’ll be taken aback by something that goes down. Could this have to do with Charlotte? Her behavior as of late has been disturbing, to say the least. Could he see her in all her toxic glory in the coming days and be thrown for a loop?

Lastly, GH spoilers hint around the idea that Jordan could quit her job at Port Charles’ police department. She’ll at least ponder the idea in the coming weeks, but will she go through with it? Jordan is a stand-up cop; however, recent circumstances dictate otherwise. Will she crack under pressure and resign? 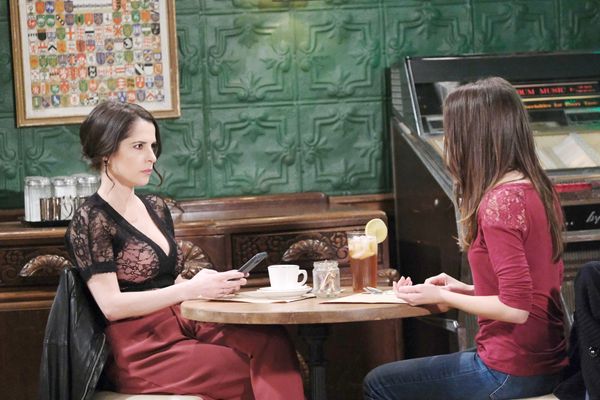