GH Weigh In: Now That Peter Is Gone, Which Character Will Be Next?

Now that Peter August has finally perished, General Hospital (GH) is gearing up for new dangers to strike Port Charles. Looking at the latest GH spoilers, we have to wonder: who will be the next character to go?

As problematic as Wes Ramsey’s character was, August played an essential role: the reliable bad guy. As such, GH is moving quickly to instate (or reinstate) another criminal who will put beloved characters at risk. As Anna senses a new threat moving into Port Charles, we look at two individuals who are willing to get their hands dirty (but aren’t named Victor Cassadine): Ryan Chamberlain and Selina Wu!

Chamberlain used to obsess over Felicia but it’s pretty clear that dynamic has shifted. This serial killer likes a challenge; someone who will awaken his most twisted fantasies. And GH is making it clear that Ava Jerome answers both of those criteria!

“There’s absolutely nothing that Ryan can do to us from Spring Ridge,” Ava recently said to Nikolas. Of course, as Jerome said that, the woman who was sitting directly to her left, Esme Prince, was already helping Chamberlain’s next scheme.

Whatever it is that Ryan’s up to, it’s clear that he’s using Esme – who may or may not be his biological daughter – to set a trap for Ava. And Esme won’t think twice about fulfilling Ryan’s evil wishes, given her bond to Spencer.

Ava and Nikolas are currently planning their vow renewal ceremony, and have decided to make it a public event. Could Nik find himself in the crosshairs because he’s captured Ava’s heart?

This couple is on a serious upswing as of late, which is a minor miracle given the struggles they had during the whole Spencer/Esme stalking ordeal. It’s a soap opera tradition to tear a couple down when they’re at their happiest, so it makes sense that either Ava or Nik will disappear around the time of their vow renewal ceremony.

If Ryan and Esme were to wipe Nik off the canvas (either via abduction or something more sinister), it would force Ava and Spencer to work together in order to rescue him. Not only would this be an interesting storyline for GH fans, it could also unmask Esme’s true motivations.

GH spoilers indicate that Brad’s life will take another dramatic turn now that Selena Wu has returned. As it turns out, Brad’s aunt wants him to run an illegal poker ring out of The Savoy. Although Brad recently agreed to poison a prisoner (who turned out to be Peter August), he isn’t exactly the hard-edged criminal type. So, how is he supposed to control a high-stakes poker tournament full of powerful movers and shakers?

Meanwhile, good pal Britt just agreed to stick her neck out and try to get Brad back into a job at General Hospital. Selina already detests Britt, so if Brad chooses to pursue a future working with his bestie over helping the family business, Wu will have more reason than ever to make Dr. Westbourne disappear.

Sticking with that storyline, Curtis gave off a defiant position when Ms. Wu made a pitch to use his venue. He politely declined but she persisted, even making a veiled threat about Ashford “living to regret it”. Even though Curtis will mull over this proposition, it’s unlikely that he’ll voluntarily get into business with the mob. So, if Curtis turns Ms. Wu down a second time, and enlists some powerful allies of his own for protection, he could wind up smack dab in the middle of a mob battle over The Savoy.

Also, if Curtis were to disappear, who would be in charge of solving his disappearance? Why, police commissioner Jordan Ashford, of course! Wouldn’t that put Jordan and Portia into a tense situation!

Unlike our other unlucky candidates, Jake has nothing to do with Chamberlain or Wu. Yet, he’s on this list because with all the weird, Franco-related occurrences that have been happening, Jake is a soft target. While Elizabeth is dealing with a could-be stalker scenario and Cam is preoccupied with his video leak, Jake feels excluded. Both Cam and his mother think he needs psychiatric help, and this angers him.

Jake can be forgiven for being moody and withdrawn; from his time on Cassadine Island to Franco’s passing, he’s had a rough go! Jake has a habit of running away from home; in several previous attempts, he could be found at Franco’s art studio. With that studio now torched (and arson being suspected), could someone be trying to squeeze Jake when he’s already vulnerable?

There’s clearly an outsider in this storyline, and whether it’s Betsy Frank or someone else looking for Hayden (or even Jeff Webber?), Jake could very well end up in the crossfire. 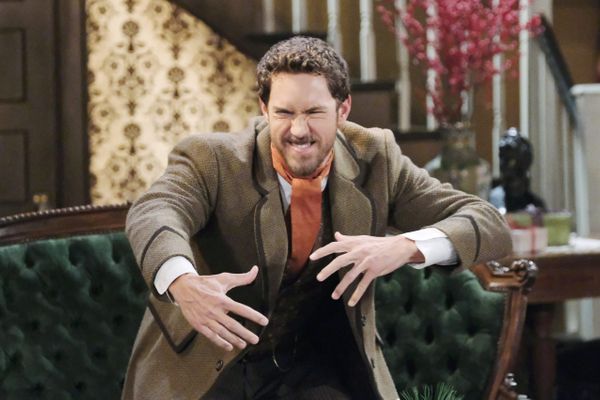 We Weigh In: Why Does Everyone Hate Peter August On General Hospital?