TV Christmas movies are already in full force on Lifetime, but one of the most anticipated is just over a week away from airing, and now the network has released a new sneak peek trailer for The Christmas Contract!

For the film, Burton stars as Jolie, a woman who returns home for Christmas faced with her ex-boyfriend bringing home his new girlfriend for the holidays. In response, her best friend Naomi (Danneel Ackles) draws up a “Christmas Contract” in which Naomi’s brother Jack and Jolie sign in order to pose as a couple to get through the holidays.

The sneak peek for the movie shows Naomi bringing the pair together to offer them the contract, and while Jolie is hesitant at first, she quickly changes her mind after Naomi shows her a post from Jolie’s ex Foster with his new girlfriend. “Don’t forget to call me. Don’t kill each other!” Naomi calls after the pair as they exit her office after signing the contract.

The Christmas Contract premieres Thursday, Nov. 22 at 8/7c on Lifetime, but One Tree Hill fans will be ecstatic to learn that afterward, Lifetime has put together a very special One Tree Hill holiday reunion called Tis the Season: A One Tree Hill Cast Reunion which is bringing together the One Tree Hill stars from the film along with other alum including Paul Johansson who played Dan Scott and Stephen Colletti who played Chase Adams along with “special guests” which fans can only guess about!

Don’t forget The Christmas Contract premieres Thursday, Nov. 22 at 8/7c on Lifetime followed immediately by the ‘Tis the Season: A One Tree Hill Cast Reunion at 10 p.m.!

12. When Is It Happening

The Christmas Contract is scheduled to air on Thursday, November 22, 2018 at 8 p.m. on Lifetime. Following the end of the film, Lifetime will immediately air a one-hour One Tree Hill Christmas reunion special.

The entire reunion came about thanks to Lifetime’s new holiday film The Christmas Contract which originally reunited several One Tree Hill stars. Hilarie Burton (who played Peyton Sawyer), Danneel Ackles (who played Rachel Gatina), Robert Buckley( who played Clay Evans), and Antwon Tanner (who played Skills Taylor) came together to begin filming The Christmas Contract in the summer of 2018 which initially got the rumor mill spinning about a One Tree Hill Christmas reunion. While the movie isn’t directly associated with the popular teen drama, it does star four of the show’s alum with Burton in the lead as Jolie who “returns home to Louisiana for Christmas for the first time since a bad breakup with her boyfriend. Seeing him is inevitable as their parents run the town’s annual Christmas Market together, but when she discovers Foster is bringing home a new girlfriend, Jolie cannot bear the thought of going home alone and seeing them together. Her best friend Naomi (Ackles) suggests that Jolie bring her [Naomi’s] flaky brother, Jack (Buckley), home for Christmas as he has no plans this year. Jolie, a professional web designer, is hesitant; so, Naomi, a lawyer, creates a Christmas contract to give them both something they want—a buffer for those awkward moments around Jolie’s ex and a website to help sell Jack’s upcoming novel. Unbeknownst to them, the Christmas contract proves to be so much more than what they signed up for.”

After the movie The Christmas Contract was confirmed, fans believed that was the closest they were going to come to a One Tree Hill reunion, until Lifetime made a very special announcement. Lifetime confirmed in late September that directly after The Christmas Contract there was going to be a One Tree Hill reunion special called ‘Tis the Season: A One Tree Hill Cast Reunion. The reunion will feature the movie’s One Tree Hill stars as they reminisce about their time on the show and coming back together all these years later, however, Buckley hasn’t been confirmed to be a part of the ‘Tis the Season special. “The Tree Hill Ravens are back together to celebrate the Christmas season on Lifetime. In this special one-hour reunion, Hilarie Burton, Tyler Hilton, Danneel Ackles, Antwon Tanner of The Christmas Contract and Stephen Colletti of Hometown Christmas, reunite for a special evening that will include a few surprise special guests,” the announcement from Lifetime read.

While it has been confirmed that the One Tree Hill stars of The Christmas Contract including Burton, Ackles, and Tanner will of course be a part of the Christmas reunion special, they have also teased that they will be joined by “special guests.” It seems that Tyler Hilton who played Chris Keller and Stephen Colletti who played Chase Adams on One Tree Hill have been confirmed to be taking part in the reunion special, but others are hoping that Bethany Joy Lenz will also take part. Lenz as well as Colletti have their own Lifetime holiday movies airing on the network this Christmas season as well which means it is likely Lenz will take part. While no other One Tree Hill stars have been confirmed as the “special guests” fans are also hoping that James Lafferty will also make an appearance as he and Stephen Colletti have maintained a strong friendship in the years since One Tree Hill ended.

With so many One Tree Hill stars reuniting for the Christmas special, it wouldn’t be right not to have Dan Scott! After the Christmas reunion special was confirmed, it was later revealed that Paul Johansson, who portrayed Dan Scott, would be hosting the reunion! While Johansson hasn’t commented on the reunion, it seems he will certainly be a part of it in some capacity.

Although many of One Tree Hill‘s former stars are involved, there are some glaring absences. Two of One Tree Hill‘s biggest stars, Chad Michael Murray and Sophia Bush, have not been connected to the Christmas reunion special, and it seems unlikely they will make a surprise appearance. For Murray, it is because he is starring in his own TV holiday movie on Lifetime’s competing channel, Hallmark.

Along with the “special guests” that will be joining the reunion, fans will be excited to know that Tyler Hilton will be involved in both the film and the One Tree Hill Christmas reunion! Hilton, who played Chris Keller on the series, will have a musical appearance in The Christmas Contract and then will be participating in the reunion afterward. Of course, Hilton is no stranger to Lifetime holiday films as he and Burton both starred in Lifetime’s Christmas on the Bayou back in 2013.

The entire mystery surrounding a possible One Tree Hill reunion began way back in June when Burton, Tanner, Ackles and Buckley began sharing photos of each other working together once again. They all shared the posts with the #Christmas2018 and they created such a frenzy with fans that shortly after the posts had to be deleted by the stars. As hysteria around a possible One Tree Hill reunion mounted, it was quickly announced that the four stars had actually come together to film The Christmas Contract in Lafayette, Louisiana. With the news finally out, the stars began tweeting stories about the movie, with Burton writing, “Almost 5 years ago, @robertbuckley and I put it out there we wanted to do an Xmas movie together. We did it buddy!!!!”

While Sophia Bush has not commented on the Christmas reunion special recently, it doesn’t seem likely she will be one of the “special guests.” After the news broke about the movie featuring four One Tree Hill stars, Bush said, “It has nothing to do with our show. I’m sorry.” She added that although several of the show’s stars were involved there were no official plans for a One Tree Hill reunion. “There are no plans. I don’t know if that’s to say there never will be, but literally there is not a single discussion of a plan in the works at all.”

As for Chad Michael Murray, he too hasn’t commented on The Christmas Contract or the ‘Tis the Season special that is set to air afterward, but it is also very unlikely that Murray will be taking part. With many of his One Tree Hill costars starring in the Lifetime holiday movie, Murray is starring in a Christmas movie of his own on Hallmark called Road to Christmas. Murray stars in the film as Danny Wise while Jessy Schram stars as Maggie Baker. The official description of the movie reads: “Los Angeles television producer Maggie Baker unwittingly falls for Danny Wise, the son and former producer of his mother’s popular annual Christmas special Julia Wise Lifestyle. When Maggie’s secret plan to reunite Danny and his two brothers with Julia during the live broadcast in Vermont goes awry, Maggie is reminded that above all, it is the love for family and friends that makes the merriest of Christmas.”

Lifetime was able to keep a lot about the film under wraps aside from the behind-the-scenes photos that were posted and then deleted by the cast, but on Monday, November 5 Lifetime tweeted a trailer for the movie. The 30 second trailer features Buckley, Burton, Ackles, Tanner and Hilton and even features a kiss between Burton and Buckley at the end! As fans of TV Christmas movies know however, there is always a secret being kept that derails the love story of the central characters and audiences are just going to have to watch to find out what that is!

Among the “special guests” being teased to take part in the ‘Tis the Season special, it seems fans can count on Bevin Prince to be there who of course played Bevin Mirskey on One Tree Hill. Hilarie Burton shared a photo of herself along with Prince and Ackles, writing, “Double double, toil and trouble! I miss getting to play with these crazies every day. @bevinaprince and @danneelackles512 are more fun than should be legal. So glad @lifetimemovies brought us back together for a reunion Christmas special!!! Mark yer calendars kids! Nov 22 our movie “The Christmas Contract” premieres at 8pm AND right after check out “Tis the Season: A One Tree Hill Cast Reunion”. If you were wondering if our collective friendship was borderline cultish….the answer is yes. More pics coming soon!
#workwithyourfriends #lifetimemovies#christmasmovies.” 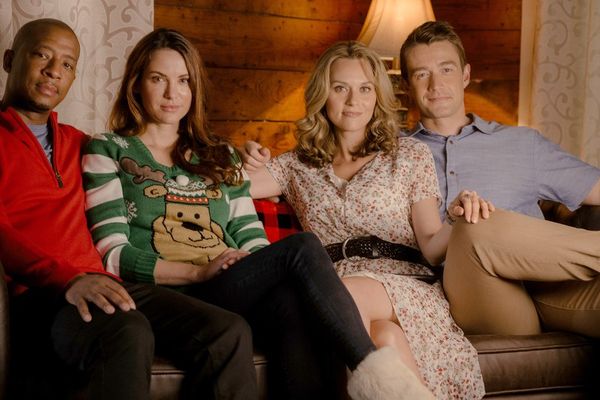