Meghan Markle And Prince Harry Dazzle On The Red Carpet At Intrepid Museum In N.Y.C

Meghan Markle and Prince Harry stepped out in New York City to honor veterans at the Intrepid Museum.

The duo arrived at the Intrepid Museum on Wednesday night for the 2021 Salute to Freedom gala. The Duke and Duchess of Sussex dressed to the nines for the evening. Harry opted for a Giorgio Armani tuxedo pinned with four medals with a bow tie and the cross for Knight Commander of Royal Victorian Order around his neck. Meghan wore a dazzling red gown by Carolina Herrera with matching heels by Giuseppe Zanotti. Both Meghan and Harry topped their ensembles with red poppies.

The Intrepid Museum’s Salute to Freedom gala released a statement thanking Meghan and Harry for their work to honor the men and women who serve. “We are so grateful to Prince Harry, The Duke of Sussex for honoring and amplifying the stories of these heroes and helping to raise awareness for mental health support for our men and women in uniform,” said Susan Marenoff-Zausner, president of the Intrepid Museum. 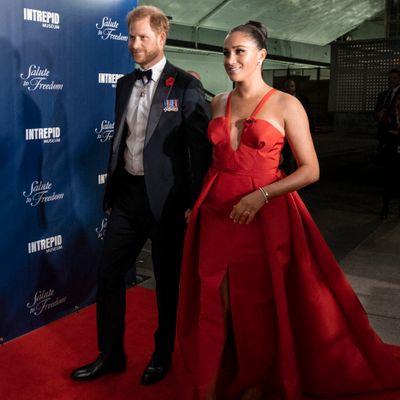