Meghan Markle Just Broke One Of The Most Controversial Fashion Rules

The Duchess of Sussex, Meghan Markle, has a reputation for wearing outfits that bend what’s traditionally expected of royalty. She’s proven that she’s unconventional, yet still totally classy when it comes to style, which is exactly what we love about her.

Most recently, she stepped out wearing an outfit that broke one of the most highly debated fashion rules — whether it’s acceptable to mix navy and black. She recently was spotted at a sporty outing with Prince Harry where they attended the Coach Core Awards at Loughborough University, Leicestershire. The Duchess looked comfortable and chic in a pair of tailored, wide-leg trousers by Altuzarra and a classy belted top with ruffles by Oscar De La Renta. Clearly, the Duchess has no shame in breaking fashion rules and looked effortless styling navy and black together in the most expert way possible. Markle also opted for a fresh hairstyle for this outing where she left things sleek and straight with choppy layers rather than wearing her signature messy bun or loose waves.

Even though Markle’s look broke traditional fashion rules, we have to admit that we love how this color combo looks on her! It’s professional and classy, but still pushing the rules a little which is a huge part of Markle’s charm in the royal family. What do you think of her look? Did she pull off mixing black and navy? 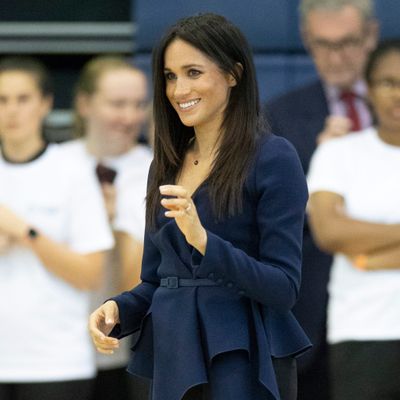