Congratulations are in order for Pippa Middleton and James Matthews who have welcomed their first child together!

The couple welcomed a baby boy weighing 8 lbs. 9 oz. on Monday, October 15, according to reports but now name has been released. “Everyone is delighted and mother and baby are doing well,” a rep for Middleton said.

The news comes only one day after Duchess Meghan and Prince Harry announced they are expecting a baby in Spring 2019, and only a few days after Pippa stunned in green while attending Princess Eugenie’s wedding on Friday, October 12.

The new baby makes Duchess Kate Middleton an aunt for the first time, while Pippa has been one of the first to visit Kate after the births of her three children with husband Prince William.

Pippa and James were married on May 20, 2017 and after many rumors that they were expecting earlier this year, the 34-year-old finally confirmed the pregnancy in early June. Pippa has documented her pregnancy and staying healthy and active for the Waitrose magazine.

“I was lucky to pass the 12-week scan without suffering from morning sickness. That meant I was able to carry on as normal,” Pippa wrote.

“I’m fanatical about sport and have looked at loads of books and websites on exercise during pregnancy but have been disappointed by the limited technical information on what you can and can’t do,” she penned, later explaining that she’s needed to tweak her workout regime to accommodate her changing body. “And this being my first pregnancy, I had so many questions I felt were still unanswered.”

Naomi Campbell made quite the statement at Princess Eugenie’s wedding. She donned a black Ralph & Russo dress and cape combo from the brand’s Spring/Summer 18 show. She accessorized with a black pair of leather gloves and a black fascinator that matched her chic dress. She definitely looked like she was ready for the runway!

Demi Moore looked absolutely gorgeous at Princess Eugenie’s wedding in a maroon Stella McCartney dress with a matching fascinator. While it may have surprised some to see her there, she’s actually a long-time friend of Princess Eugenie’s parents, Sarah Ferguson and Prince Andrew, and has attended a birthday celebration for Princess Beatrice in the past.

Pippa Middleton is expecting her first child in only a matter of weeks, but she still made an appearance at Princess Eugenie’s wedding in this stunning green dress by Emilia Wickstead, which showcased her bump. She accessorized with a matching hat, which almost blew off her head as she was arriving at the church.

Prince Harry’s ex Cressida Bona was all smiles when she arrived at Princess Eugenie’s wedding. She donned a patterned blue dress with black accents and a headband-style headpiece. While the dress is great, the only way to improve this look would have been to go without the headband. It doesn’t really go with the dress.

Singer Ellie Goulding was in a shiny, loose-fitting, baby blue dress with a matching fascinator at her friend Princess Eugenie’s wedding. Her fiancé, Caspar Jopling, attended the nuptials with her. Goulding and Princess Eugenie have been friends for years and she was even linked to Eugenie’s cousin Prince Harry at one point.

Liv Tyler opted for a sophisticated look at Princess Eugenie’s wedding. She donned a sleek navy blue Stella McCartney skirt suit with a matching feather net fascinator and velvet Stella McCartney pumps. She was there with her football agent boyfriend, Dave Gardner.

British actress and model (and sister of Cara Delevingne) Poppy Delevingne rocked a powder blue Oscar De La Renta dress with a matching Oscar De La Renta coat, Christian Louboutin shoes a bedazzled Victoria Grant hat. We love the dress and the coat, but a nude pair of pumps with a fascinator would have made this look even better!

Singer James Blunt’s wife Sofia Wellesley looked beautiful at Princess Eugenie’s wedding. She wore a REDValentino floral dress that was perfect for autumn and accessorized with a black fascinator and red pumps. While we love the dress with the fascinator, the only thing that could have improved this look is a black pair of pumps.

On her younger sister’s big day, Princess Beatrice made sure to dress her best – without taking all of the attention away from Eugenie! She wore this royal blue Ralph & Russo skirt suit and finished the look off with a pair of grey Ralph & Russo heels, their Alina’ dove grey clutch, and a Sarah Cant hat.

Kate Moss and her daughter Lila Grace were two of the most fashionable people at Princess Eugenie’s wedding. While Kate was in a black and white polka two-piece skirt suit with a black fascinator a royal blue pumps, her stylish daughter wore a long pink lace gown with a black furry bolero, black heels and a pink veil. The two looked absolutely stunning. Clearly being fashionable runs in the family!

Meghan Markle looked lovely in this navy dress and coat by Givenchy – the same designer who designed her wedding dress. The matching hat she wore was by Noel Stewart. We definitely think navy is one of Markle’s colors – it’s like she’s glowing in this picture!

The Duchess of Cambridge wore a fuchsia Alexander McQueen dress to Princess Eugenie’s wedding, complete with a matching fascinator. Kate Middleton usually goes for neutral colors for big events, so this was a big surprise. She looks breathtakingly beautiful, doesn’t she? We think so! 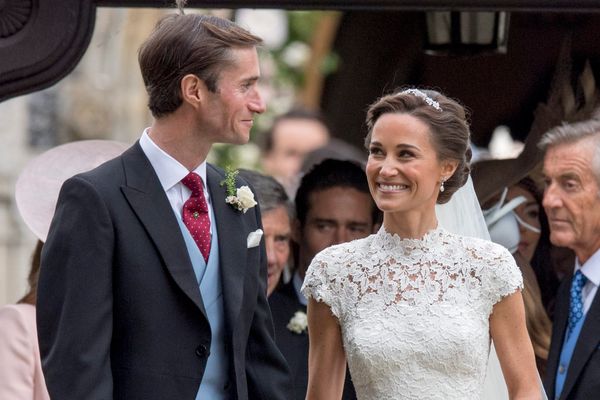 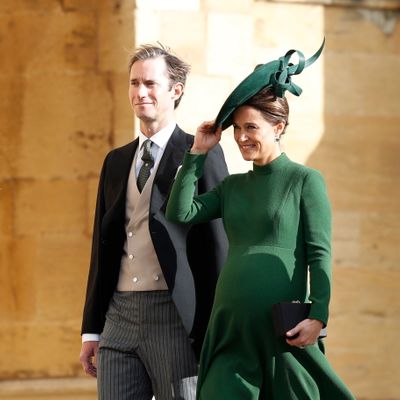