Prince Harry and Meghan Markle dropped a bombshell this week when they shared that they would be stepping down from their roles as senior royals.

Many fans are curious about the back end conversations that led to this decision and more information is being revealed each day. According to the Evening Standard, Queen Elizabeth and Prince Charles had warned Meghan and Harry to hold off on releasing their plans to the public. Meghan, Harry, and the Queen had allegedly still been in ‘early talks’ about their decision and the couple’s statement came without prior notice.

“Prince Harry approached his father about spending more time in North America ahead of Christmas, which was met with the need to come up with a thorough plan,” reports the Evening Standard. Prince Harry had reportedly drafted a proposal in early January but was told by Prince Charles that he’d need more time to review the details such as funding.

Prince Harry then asked to meet with Queen Elizabeth when he returned from his holidays in Canada. While his grandmother did agree to meet, she explained that exact plans for his role should be handled by Prince Charles. The meeting between the Queen and Harry was blocked by courtiers and the Queen advised they should hold off on any announcement until formal discussions had taken place.

Reportedly, Prince Charles and Prince William were given a copy of the Duke and Duchess of Sussex’s statement “10 minutes” before it was released to the public on social media.

The Queen quickly responding by releasing a statement of her own via Buckingham Palace that explained the conversations with Meghan and Harry were still in the “early stages.”

The royal family’s offices, teams, and the government are working quickly to collaborate and come up with a formal plan and resolution surrounding Meghan and Harry’s decision to step down. 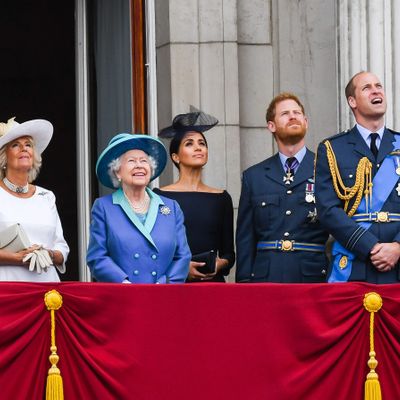