Monday is here which means there’s another new episode of The Bachelorette! This week we’ll watch the remaining three guys travel to Dallas to meet Rachel’s family before heading to Spain on their overnight dates, and even though it might seem like we’ve still got a long way to go before we get to the finale, there are only three episodes left!

For those who just can’t wait any longer, Reality Steve has all the answers, and so far this season he’s been completely accurate in all his elimination spoilers! Read our finale spoilers here and find out who Rachel’s finale pick is.

Tonight fans watch as Bryan, Peter and Eric head to Dallas with Rachel to meet with her family individually. These episodes are extremely important because viewers are watching closely to see who fits in well with the family, and who’ll be on the outs. Sometimes it’s obvious which one didn’t leave a good impression, while other times it’s tough to tell! No matter what, Rachel has to make a decision and by the end of this week’s episode, she narrows her picks from three to two.

After meeting with the family, Rachel and the final three guys head to Spain for their Fantasy Suite dates. According to Reality Steve, she eliminates Eric Bigger first, and in the final rose ceremony when it comes down to Peter and Bryan, Rachel chooses Bryan!

Usually there’s the added mystery of whether or not they are engaged, but since Rachel has already revealed she is happily engaged and wants to get married “sooner than later,” it’s clear she and Bryan are well on their way to living happily ever after! 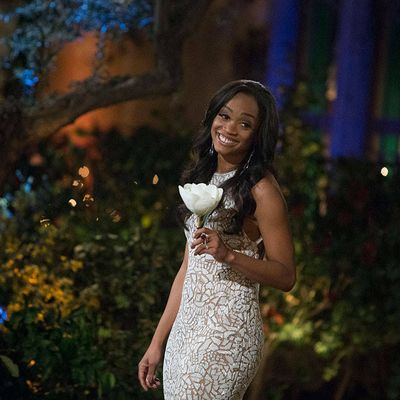