We Weigh In: Is “The Brooke Logan Show” Hurting B&B’s Ratings?

Since the beginning of 2022, The Bold and The Beautiful’s (B&B) ratings have been on a downward trend. In fact, according to one reliable source, the CBS soap has tanked 70,000 viewers between January and mid-March of this year. Why is that happening?

An overwhelming percentage of B&B viewers can readily provide an answer: too much of the show still revolves around Brooke Logan and the fallout from her drunken New Year’s Eve.

That should be an easy criticism for writers to address, but so far the CBS sudser hasn’t changed course. In fact, the show is about to double down on their love for all things Brooke Logan, at a time when fans are pleading for mercy. But we’ll get to the 35th anniversary standalone episode in a minute.

Want spoilers? Check out Bold and the Beautiful Spoilers For The Week (March 21, 2022)

In the meantime, there’s some indication that B&B know they’re pushing it with their audience. Producer Casey Kasprzyk, who hosts Bold Live on the soaps’ YouTube channel, has been steadfast in hyping a major plot twist that will change the soap opera forever. It’s a tantalizing teaser, wrapped in a plea for patience.

Whatever this plot twist entails, it had better upset a Brooke-centric storyline that is marring their ratings. As if the screen-time reserved for Logan’s tears isn’t enough of a problem, most characters on the show do nothing but gossip about her marital issues from the sidelines. Is a kiss that happened nearly three months ago honestly the only thing happening in L.A. right now?

It appears so. Typically interesting characters have been reduced to repetitive bores, as they get sucked into the blackhole of Brooke’s stagnant story. Steffy, in particular, has become an insufferable cheerleader for her parents’ reunion. Has Steffy ever been this one-dimensional?

Want plotline predictions? Check out Bold And The Beautiful Plotline Predictions For The Next Two Weeks (March 14 – 25)

If this torturous limbo will predictably end with Brooke and Ridge reuniting, shouldn’t the stakes be higher? Sheila is still bragging about switching a bottle label. Taylor is telling Ridge to take his time. And Logan’s relapse was essentially a non-issue, since she hasn’t struggled to get back on the wagon.

But viewers aren’t fleeing B&B solely because “Bridge” is getting a lot of screen-time. Rather, it’s that B&B seem so disinterested in distributing their eighteen-odd minutes per episode into other storylines. Shouldn’t they be eager to flesh out the lives of other characters, instead of putting all their eggs in one redundant basket?

For a soap opera that runs half the length of its daytime competitors, B&B’s writers should be squeezing every second into telling dynamic stories with their tremendous cast. However, instead of utilizing their award-winning actors, the soap allocates its “free time” to flashbacks – arguably more than the other three soaps combined.

It doesn’t help that when viewers aren’t seeing Brooke in emotional turmoil, they’re stuck with the unpopular pairing of Paris and Carter. After the chemistry Carter had with Quinn and the potential he had with Katie, it’s bizarre to be force-fed this awkward couple. But the treatment of Carter Walton is a whole ‘nother can of worms.

So much talent is being wasted. Critical characters like Bill Spencer, Katie Logan and Wyatt Spencer have been languishing without a proper storyline for too long. Also on the back-burner are characters that appear to be “on the show” in theory, but not in practice. Will audiences ever see Shauna or Flo again? And do they have a reason to care, one way or another?

With all of these criticisms on offer, it’s hard to view B&B’s 35th anniversary as anything other than a missed opportunity. Why? Because to celebrate this milestone, audiences are being gifted… more Brooke Logan. It’s a standalone episode covering Brooke’s five true loves. Are B&B writers not reading the room here?!

It’s understandable why they’d choose to put a spotlight on Katherine Kelly Lang, given that she’s been on the cast since the first episode – but John McCook was there in the beginning as well, and his character has been doing nothing for months!

Besides, wouldn’t audiences be more intrigued about a standalone episode that addresses Eric’s status with Quinn? Fans still aren’t sure where that marriage stands, having barely survived everything from erectile dysfunction to extra-marital affairs last year. Perhaps the episode could also address what Donna Logan has been up to since she was unceremoniously fired for arousing her boss. (Yes, that scene aired in 2021 and somehow nobody cried foul.).

Want B&B news? Check out Bold And The Beautiful News Round-Up For The Week (March 7, 2022)

And as long as we’re pitching alternative episode ideas, why not write some new scenes for Quinn? Her nemesis Sheila Carter is back in town, while her other nemesis Brooke Logan’s marriage is falling apart. Oh, and Paris – who snitched on Quinn’s romance with Carter last summer – is now dating the same guy!

Portrayer Rena Sofer recently shrugged upon being asked when she’ll return to the soap, and sadly that passiveness is being reflected in the soap’s ratings. If B&B‘s writing team is unwilling to branch away from becoming The Brooke Logan Show soon, that much-hyped plot twist won’t matter. 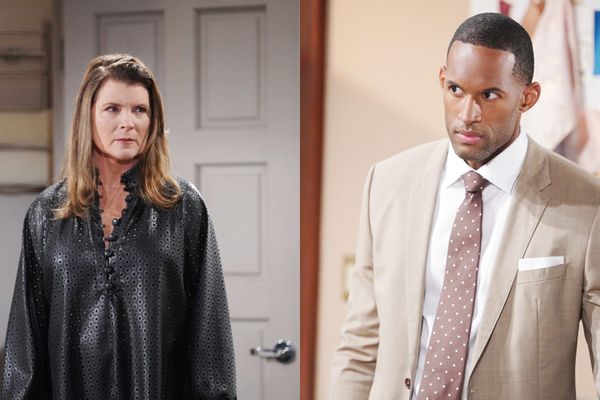 We Weigh In: Is B&B Working Harder To Ruin Sheila Or Carter?