The Young and the Restless (Y&R) insiders are murmuring about closed-door talks to replace Josh Griffith, who has manned the executive producer role since 2019. Sound familiar? These rumors about Griffith only pop up every few months, it seems!

However, the latest speculation has more oomph than the typical, fan-made gossip online: not only is Griffith allegedly on the way out, but Y&R is engaged in talks with prospective successors. Jill Farren Phelps, who previously executive produced the CBS soap from 2012 to 2016, is reportedly eager to reclaim the top job. (More on her in a minute…)

Now if this still seems like minor gossip, it’s worth mentioning that on top of steering the direction of all storylines on the canvas, Griffith has also been head writer since 2008. With Griffith reportedly leaving, it’s rumored that Phelps (or whoever lands the EP job) would hire a new head writer. This change in leadership would impact the Y&R canvas in countless ways.

Want spoilers? Check out Young And The Restless Spoilers For The Week (December 13, 2021)

While such an elevated role has allowed Griffith to assume responsibility for much of the show’s accolades over the years, it has also made him the number one target for irate viewers. In stark contrast to his IMDB page, which lists a series of accomplishments, a search of his name on social media reveals overwhelming frustration and blame over his handling of various Y&R characters.

Griffith has been with the soap for so long that audiences can dust a storyline and pinpoint precisely where his fingerprints are. Viewers who wonder why Abby Newman-Abbott-Chancellor (Melissa Ordway) constantly garners so much screen-time, look at Josh Griffith. Those who wonder why Sharon Rosales (Sharon Case) never gets a narrative of her own anymore, look at Josh Griffith. Those who think the relationship between Mariah (Camryn Grimes) and Tessa (Cait Fairbanks) hasn’t been given the time of day… well, you get the idea.

Given the budget and time constraints of soap operas nowadays, these disagreements over storyline direction are inevitable. And let’s give credit where it’s due: Griffith has been instrumental in developing Adam (Mark Grossman), integrating Sally (Courtney Hope) from The Bold and the Beautiful, and a thousand other things Y&R fans take for granted. However, all of these fan quibbles point to a larger critique: that for all of its glamor and drama, Y&R is frequently boring.

Consider the major Y&R storylines of 2021 and ask yourself whether any of them made a lasting impact on the soap. From Abby’s surrogacy journey and Mariah’s abduction to Ashland’s (Richard Burgi) mysterious past, these narratives were good at building momentum, but lousy at reaching a climax. The search for Chance (Conner Floyd) was dull, Ben “Stitch” Rayburn (Sean Carrigan) disappeared, and Ashland got a free pass for his past crimes.

Speaking of Ashland, his aggressive and untreatable cancer is beginning to look both passive and treatable. This is how Griffith’s storytelling style tends to vacillate: conflict rarely disturbs the status quo, meaning that characters are rarely confronted with a good enough reason to evolve.

Rather, the threat of change rises and then falls, leaving relationships more or less precisely where they started. Just look at the tired love triangle between Phyllis (Michelle Stafford), Nick (Joshua Morrow) and Jack (Peter Bergman). She’s leaving one former flame for another, but it’s all been done before. She’s already blown up her relationship with Jack (twice!) and both times by cheating on him. There’s no tension or excitement there.

Want more spoilers? Check out Young And The Restless Spoilers For The Next Two Weeks (December 13 – 24, 2021)

Y&R is currently on contract until 2024 and its ratings are hitting its demographic markers, so why would CBS and Sony make a change in leadership right now? Essentially, to achieve what Griffith is so wary of: change. But is Jill Farren Phelps the ideal candidate to bring a new dawn to Genoa City?

Phelps has already been fired from this exact role at Y&R, but let’s not make the mistake of assuming that her firing meant she couldn’t do the job. The executive producer role is like the general manager position in a professional sports club; it isn’t designed to be a secure job. Rather, it’s a baton that qualified professionals hand off to one another when a long-running show needs fresh energy.

Much like Griffith, Phelps has a divisive relationship with the Y&R audience. It was under Phelps’ command that Y&R lost both Billy Miller (Billy Abbott) and Michelle Stafford. She was also behind the storyline of Billy’s daughter, Delia (Sophie Pollono), passing away in 2013 – an event that upset many viewers – although Griffith has taken some credit for that one, too.

Want plotline predictions? Check out Young And The Restless: Plotline Predictions For December 2021

Perhaps Phelps’ name is being dropped into the conversation because of her well-known affection for actor Steve Burton. In 2013, she brought Burton to Y&R as new character Dylan McAvoy, who would later be revealed as the son of Nikki Newman (Melody Thomas Scott) and Paul Williams (Doug Davidson). Now that Burton is a free agent, following his firing from General Hospital, many onlookers think his Y&R return would go hand in hand with Phelps’.

Time will tell whether the current rumors hold any water, but 2024 isn’t that far away. If Y&R is looking to spice things up before their next renewal period, it would make sense to begin the transition process now rather than later. 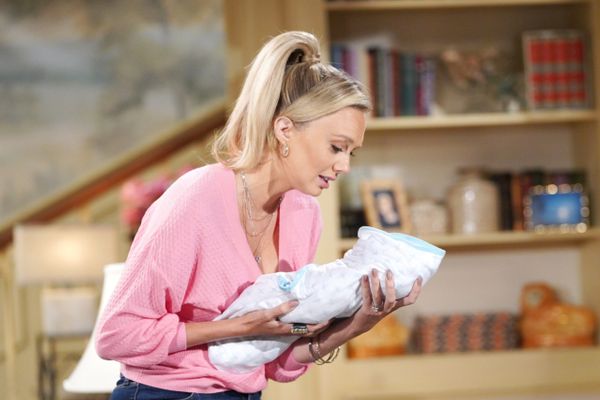 We Weigh In: Can Y&R Please End This Abby And Chance Storyline Already?