Sonny Corinthos (Maurice Benard) has finally returned to his life in Port Charles! Whether you enjoyed Sonny as “Mike”, or you thought the whole Nixon Falls detour was excruciating to watch, there’s no denying that General Hospital (GH) viewers have had a lot of time to decide how they feel.

After all, Sonny has been marginalized for most of the year, unaware of his true identity and becoming emotionally attached to a woman who could’ve helped him get home within hours. That woman, Nina Reeves (Cynthia Watros), kept Sonny in the dark about his wife and family, while pushing her relationship with him into romantic territory.

Even prior to her latest misadventure, Nina was already pretty close to a pariah in Port Charles. And now that Sonny is back home with his family, GH fans are debating what the fallout of Nina’s actions should look like. There should be major repercussions for the character of Nina — if not for Sonny’s sake, then for viewers who’ve put up with this torturously slow story. So what will it be, Ms. Reeves: exile, or “a permanent vacation”?

Exile might be a suitable punishment in the eyes of GH viewers, but it’s beginning to look as though Nina might get a free pass for her delusional romance.

Watros has done an incredible job of getting Nina under the skins of viewers over this past year. Unlike Peter August (Wes Ramsey), whose cartoonish qualities keep him somewhat benign, Nina’s transgressions have a real-world ickiness to them. Since Sonny was incapacitated and allowed to believe that his life was much simpler than it was (no spouse, no family), it isn’t a stretch to say that Nina seduced him.

Factor in the vendetta Nina already had on the record with Sonny’s wife, Carly (Laura Wright), and it should be hard for other Port Charles residents to see Nina’s motivations as anything but malicious. But should is the operative word here, and as days turn to weeks, I’m not seeing a lot of condemnation from Nina’s peers. Maxie (Kirstin Storms) and Sasha (Sofia Mattsson) have shown empathy for her, and Phyllis (Joyce Guy) doesn’t seem to be harboring any ill will. Even Jax (Ingo Rademacher) is going out of his way to plead Nina’s case with Sonny.

Carly, who still doesn’t know the half of Nina and Sonny’s relationship, is doing her best to contain her rage, and Jason (Steve Burton) is stopping her from waging all-out war on her nemesis. Crimson Magazine won’t suffer at all from Nina’s “sabbatical” and she’s basically back to her old life.

But it’s Sonny’s reaction that has been the most surprising. Sure, he’s angry about being misled by Nina and separated from his family, but he hasn’t done much of anything about it. Finally, on the October 13th episode, Corinthos laid down some “ground rules”, but they were more preoccupied with keeping Nina away from his wife than seeking any measure of justice for what she did. As Nina mocked gratitude and poked holes in his rules, he even admitted that he might eventually forgive her.

So… that’s it? Will Nina even lose visitation rights with Wiley when all is said and done? Soap operas rarely lay down the law on criminal behavior. Still, it would satisfy virtually everyone if GH writers — instead of rehabilitating Nina’s image over the next few months — chose to literally rehabilitate Nina in a proper facility. It would be a win-win for audiences, as Watros could turn in another great performance while her character faces real consequences.

The last time I wrote about this storyline, I argued that its patient crawl would ultimately raise the stakes for a climax that might change some core GH characters forever. And there’s still loads of potential for that to happen, with regards to the secrets that Sonny, Jason and Carly are keeping. Yet it appears that GH writers are trying to steer our attention to flashier stories. Greece! Drew Cain! Mind control! Victor Cassadine!

For a storyline that mostly played out between two characters in an abandoned bar, the whole tension behind Nina and Sonny’s relationship was the fact that she kept his identity from him. If that tension amounts to nothing, I think viewers have been sold a lemon of a story. (It’s telling that GH ratings hit their lowest point in eleven months the week before Sonny returned to Port Charles.)

Maurice Benard promised “fireworks” when his character inevitably returned to Port Charles, and perhaps GH viewers should continue to practice patience. But we’re not monks! At some point, the slowest storyline of 2021 simply has to bear fruit. 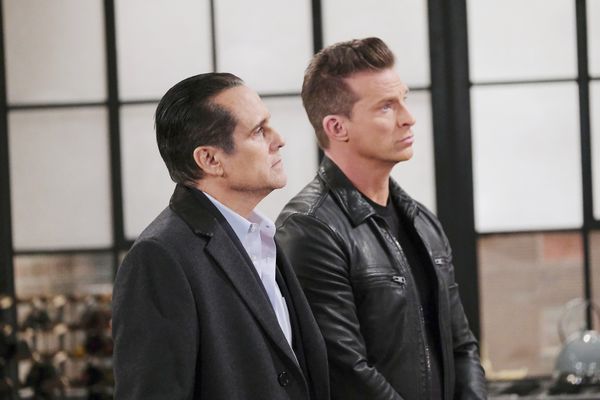