We Weigh In: Was B&B’s Plot Twist Just A Con Job?

This winter, The Bold and the Beautiful (B&B) courted a lot of hype as they teased a plot twist that would change the CBS soap forever. As it turns out, “forever” lasted about two months.

The big climax occurred on April Fools Day, when Steffy and Finn were shot by Sheila. But fittingly, viewers are beginning to feel a bit conned by this disingenuous twist. Why? Because B&B misled viewers into believing that Tanner Novlan had exited the soap — not through crafty storytelling, but via dishonest press releases!

The campaign for this plot twist began by word of mouth, with much of the hype coming from producer Casey Kasprzyk. On his Bold Live show, he compared the storyline to major events in B&B’s past, such as when Sheila returned to the canvas in 2017, or when Maya revealed she is a transgender person.

“This is [executive producer] Brad Bell at his best,” promised Kasprzyk.

Back in February, the hype sounded like a preemptive strike against complaints that nothing was happening on the show. (Viewers will recall that the first three months of 2022 were essentially Brooke Logan wondering why she drank on New Year’s Eve.) But by late March, Kasprzyk teased a shortlist of names and insisted that at least one character would be eradicated from the canvas shortly.

Let’s not diminish what happened next: Sheila shot Steffy, as well as her son. Steffy lost her memory and Finn lost his life. As far as high stakes go, plot twists don’t get much bigger than this! B&B ratings soared. Audiences were stunned, upset and intrigued.

Unfortunately, two months later, B&B has neutered this promising storyline. Steffy has reclaimed her memories of that fateful night behind Il Giardino. Sheila has been arrested, basically with a smoking gun in her pocket. And as Monday’s episode revealed, Finn is still alive.

This is where B&B’s plot twist begins to fall apart. Many viewers suspected all along that Finn was still alive and being held by his surgeon mother, Li. However, fans were dissuaded from this truth, not via proper storytelling on-screen but misleading headlines in the press.

First, portrayer Tanner Novlan confirmed his “heartbreaking” exit. Then, co-star Jacqueline MacInnes Wood shared her sadness over his departure. If the storytelling alone couldn’t fool audiences, then this wasn’t a “plot twist” so much as a sleight of hand.

Want B&B plotline predictions? Check out Bold And The Beautiful Plotline Predictions For The Next Two Weeks (May 23 – June 3, 2022)

Did B&B earn its high ratings through sheer creativity, or by deceiving its audience? Let’s put it another way: Isn’t it kind of cheating for the show to authoritatively tell viewers that an actor is no longer with the soap, when it’s untrue?

Even Novlan seemed sheepish when hosts on The Talk asked him if he knew that his character hadn’t really perished. “Okay, so here’s the thing… I kinda knew,” he grimaced. “Don’t be mad at me! But I’m contractually obligated not to tell you guys and I felt awful about it.”

So what did this so-called plot twist actually accomplish? If Steffy and Finn are bound to reunite (as portrayer Tanner Novlan nearly let slip in the same interview) and Sheila is back in prison, the B&B canvas isn’t changed forever. In fact, it’s pretty much undisturbed.

Want more B&B spoilers? Check out Bold And The Beautiful Spoilers For The Week (May 30, 2022)

Kasprzyk’s proclamation of “Brad Bell at his best” suddenly falls under an unflattering light. If B&B writers are so gun-shy about changing the status quo, fine. Pretend that Finn met an untimely demise and then bring him back. Flirt with the notion of Steffy going back to Liam and then have her reunite with Finn. Install a revolving door in Sheila’s prison cell. Have a ball.

But if a soap opera’s secret weapon is deceiving its audience by way of the press, it’s a trick that only works once. Will viewers tune in the next time Kasprzyk starts shouting about a major plot twist, or will they remember their fables — particularly The Boy Who Cried Wolf? 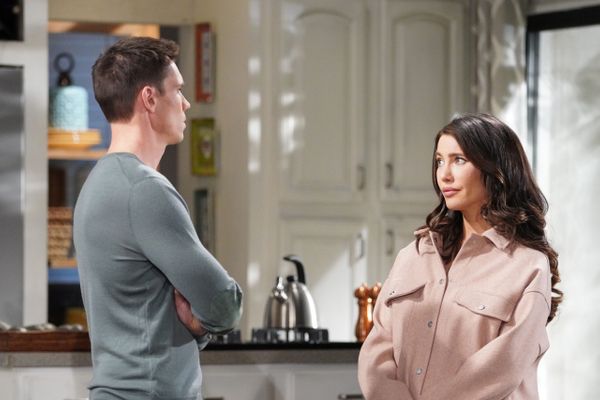 We Weigh In: Is B&B Out Of Touch With What Viewers Want?