Now that things are completely done (for now) with Sharon and Nick on The Young and the Restless, the big questions is — what is going to happen between her and Rey? On today’s episode, she is going to go to Rey’s apartment and the two are going to get into a whipped cream fight with his younger sister, Lola. Nick will show up and want a few minutes alone with Sharon so that he can talk to her, but she’ll reject that. As he leaves, he will look back and see Rey wiping whipped cream off of Sharon. In a shocking twist, after Sharon’s gone, Lola will remind Rey that he’s married. Things between Sharon and Rey seem like they could be heading in a romantic direction and a wedding ring has never stopped other characters from getting involved, so fans are going to have to stay tuned to find out what will happen next.

Want to know what else is going to happen this week with Ashley,Vicky, Nikki, Nick, Sharon, Phyllis, Rey, Kyle, Lola, Summer and Jack? Check out our weekly spoilers for the week for the Y&R.

Young And The Restless Spoilers For The Week (October 8, 2018)

Y&R spoilers indicate that Nick will have a hard time adjusting to the single life this week. He will have a rough time trying to move on without Sharon, especially with the way things exploded at the wedding. This is the second wedding that these two have planned, which hasn’t gone through. Here’s hoping they take a long break from each other. Maybe it is just not meant to be.

Y&R spoilers indicate that Nick will crash a party later on in the week. Summer could be at the event, or Nick just finds her. Either way, she’ll get scolded hard by daddy dearest for spilling the beans to Mariah about his one-night stand with Phyllis, essentially breaking the agreement they had. In fact, he’ll demand for all of his money back.

Meanwhile, Y&R spoilers indicate Sharon will have a hard week; however, Rey will be there to support her. In fact, Sharon will swing by his new apartment, and Rey will launch a paint war on her and sister Lola. This is the fun stuff Sharon needs right now to get over Nick.

Speaking of, Y&R spoilers indicate that Lola and Kyle will hang out this week. In fact, they’ll head out on a date and enjoy a nice kiss. Interestingly enough, Summer will see the two lock lips and feel a little green about the entire situation. Seems like a Summer/Lola/Kyle love triangle may be on the horizon.

5. Problems on the Horizon for Ashley

Ashley is headed for a huge week, not only is she sitting pretty as the CEO of Jabot, Neil will work hard to romance her as well. However, this huge wave that Ashley is riding is soon to come to a halt thanks to Andrew, the chemist, that was seen in late September. He’ll be back this week and it seems like he has a huge secret that could be spilled.

4. Ashley In The Hot Seat

Andrew’s role all starts off when Ashley turns Kyle’s COO request down this week. Andrew tries to blackmail Ashley by asking for a huge sum to keep him quiet regarding the trial project, and even offers Kyle the information on Auntie Ash for a price. This exit storyline for Ashley is getting good!

In fact, there is a good reason to believe that Ashley may also be behind Jack’s paternity issues. Y&R spoilers indicate that Jack will uncover something shocking soon, and he’ll be very upset about what he finds out. So much so that he takes a Jabot office chair and throws it at the window (watch out down below)! The Abbott family is set to face a huge crisis, and spoilers are teasing that Jack may be John’s bio son after all.

Lily will continue to struggle in prison, and thankfully husband Cane will be there to step it up a bit. Lily will feel as if her whole world is crumbling, and Cane will try and become the rock that she needs. These two have an incredible love story that only continues to grow throughout this entire storyline.

It seems that Nikki, Sharon, and Phyllis will all receive a crazy message that Vicky got this week. They’ll turn crazy paranoid, making them believe that someone knows about the J.T. murder cover-up. Nikki and Vicky will talk about it early on in the week, and Victoria will desperately try to keep Sharon and Phyllis on the same page. Nikki will be very worried about the individual behind this revenge plot. 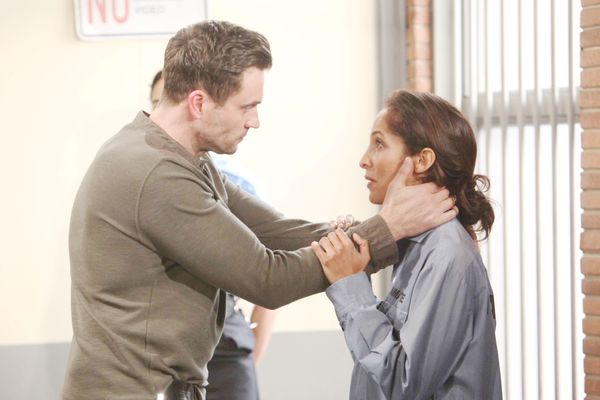 Young And The Restless Spoilers For The Week (October 8, 2018)