The Adam Newman character on The Young and the Restless is a longtime fan favorite. Over the years, multiple actors have been cast in the role and Mark Grossman is the most recent actor to take on the part. In honor of Adam Newman’s return to Y&R, take a look at these 12 things that most people don’t know about the character:

We all know that Adam’s bio dad is Victor Newman and mom is Hope Adams, but what some fans may not know is that while Nikki Newman is the love of Victor’s life, Hope is a very close second. In fact, if Hope had adapted a little better to life in Genoa City (and other misunderstandings), Nikki may not have been with Victor in the long run.

One of the reasons Hope and Victor’s marriage didn’t make the long haul was the fact that the two didn’t see eye-to-eye around a potential medical condition that could’ve plagued Adam. When Hope found out she was pregnant, her doctor advised her that her unborn child could develop retinitis pigmentosa, an illness she had that caused her blindness. Victor wanted Hope to have an abortion while Hope insisted on going through with the pregnancy.

While Hope would end up having Adam, and he’d end up being healthy with no signs of the retinitis pigmentosa condition, Victor’s insistence on her getting an abortion would ultimately cause this couple to break up, and divorce. Hope decided to raise the child in Kansas on her farm, without any influence from Victor in the least.

Much like anything in the soap opera world, things can get a little blurry over time when it comes to dates for things like birthdays and anniversaries. Adam was born on April 24, 1995; however, years later in 2012, it would be stated that his birthday was actually April 27th.

Which brings his true age into question. If fans go by the year he was born, then Adam would be in his late 20s at this point (if he’s still alive). Having said that, the character went through soap opera rapid aging syndrome (SORAS) when he re-appeared on the show in 2008 and was said to be 27 years of age, making him closer to his late 30s by now. Actor Adam Grossman is in his early thirties, so will Y&R fans see a de-SORAS of this character when he re-enters the little town? Only time will tell!

7. He Was Friends With Victor At One Point

While Adam was raised believing that Cliff Wilson was his father, in the late 1990s Victor visited Hope’s farm to get away from Genoa City and do some soul-searching. At this point, he was given the opportunity to spend some time with Adam as a young child. However, it was under strict orders that the child remained thinking that Cliff was his bio dad, not Victor.

Sadly, Cliff passed away sometime later after being hit by a drunk driver. Grief-stricken, somehow Victor convinced Hope to move back to Genoa City with little Adam to call the townhome. While Hope and Adam lived in one of Victor’s penthouses for a little bit, they ended up moving back to their farm in Kansas due to a series of events.

5. Almost Learned About His Father

One of the reasons they moved back to Kansas was due to Hope’s blindness, as she found it very difficult to move around Genoa City when she was out and about. At one point, she was almost assaulted and had her purse stolen. Another reason she left was because Victor married Diane without telling her, and she was upset. In fact, she almost let Adam know who his bio dad really was, but thanks to Victor’s shenanigans, she left town and told him to stay out of her and Adam’s lives.

When Victor had epilepsy in 2006, he left Genoa City and embarked on a journey that found him back at Hope’s farm. He once again found calmness in doing hard labor and living a simpler life. Sadly, little Adam was at camp during this time, and missed any further opportunity to bond with his bio dad; however, Victor and Hope shared some fond memories together during that time.

About a year later, Hope would reach out to Victor, asking for his help to locate Victor Jr. At this point in time, a young Adam was hanging with a bad a crowd and Hope was unable to locate him. While Victor was able to trace him to Columbia and then Sri Lanka, Adam slipped through his fingers and he wasn’t able to locate his son after that. Seemed like even back then, the apple didn’t fall too far from the tree when it came to Victor and Victor Jr.

2. Death Brings Them Together

Hope was diagnosed with carcinoma of the pancreas in 2008 and would die shortly after. Her last and final wish was that Victor Jr. finally learn the truth around his paternity, and this began the story of Adam Newman in Genoa City. While he resented his father, Adam would eventually follow Victor to the little town and join Newman Enterprises. Then, the chaos would unleash!

1. Name Changes Over the Years

Adam was born Victor Adam Newman Jr., only for his name to be changed to Victor Adam Wilson once Cliff adopted him. Over the years little Victor would eventually be known as simply “Vic.” When he moved to Genoa City in 2008, not wanting to live in his bio dad’s shadow, Vic changed his name to Adam Newman and the rest is history! 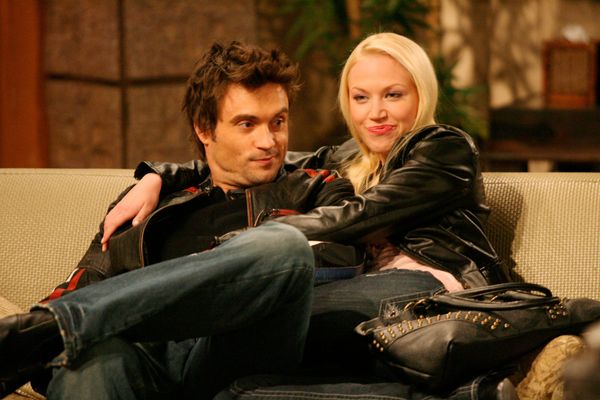