Young And The Restless: Plotline Predictions For June 2019

Summer is just around the corner, and things seem to be getting hotter and hotter in the land of Genoa City! How will things unfold on the Young and the Restless (Y&R) in the next four weeks? Below are some crazy plotline predictions for the month of June 2019.

Y&R spoilers tease that Kevin Fisher is set to return to the little town on Friday June 7. While fans have been used to a sweeter and softer Kevin over the years, it seems as if he may comeback a little edgier for this next run. Anyone remember hard dark Fisher was when he first hit Genoa City back in the day? It wasn’t pretty. Could Kevin be behind Adam’s shooting?

Y&R spoilers hint that Michael, Kev’s brother, may also dive into his former “darker” side when placed in a dire circumstance come June. If Adam finds out that Kevin is behind his shooting and aims to threaten Fisher, Michael could come at him, without giving it a second thought.

Stress could also bring out a meaner edge to Michael. After all, Lauren’s current closeness with Jack might cause some friction in their relationship, resulting in retaliation on Michael’s part. Without Lauren to ground him, Michael might just revert to his old ways. If their relationship is threatened in any way, this could cause him to go back to the dark side.

Anyone else’s eyebrows raised with these two? They were once lovers, and have always been friends; however, there seems to be a sort of spark between them lately, as they grow a bit closer (in friendship). The month of June will see them bond even more, and while Lauren is trying to set him up with other ladies, it’ll be clear she’ll also be growing fonder of him by every minute. Y&R also spoilers suggest a road trip between these two in June, and some chemistry and awkward moments may follow.

Big news in the land of Y&R! Chelsea Newman is headed back to town in June and is sure to stir things up. She may want to patch things up with Nick, or to reunite with Adam. There’s an even better chance that she’s been in cohorts with Newman this entire time, and she’s returned to help him gain custody of Christian. It’s been said she has a new husband but is that really true? She hasn’t been gone that long! Seems sketchy …

While their relationship was over years ago, sparks are flying between the two, and Adam has always had a soft spot in his heart for Sharon (and vice versa). Y&R spoilers state that Adam will equal out to trouble for the new couple Shey, and it seems that while many would think that Chelsea would be the one on his radar, his heart seems to be tugging in Sharon’s direction.

But, before he snags Sharon, could he hook up with Phyllis first? Y&R spoilers indicate that a new alliance could be forming between Adam and Phyllis, and there is a good chance that she may help him when it comes to sticking it to Nick. Red can be handy when it comes to schemes, and while plotting against your child’s father is not a good look, when has Phyllis ever been concerned with her image? Having said all that, with the way Genoa City works, no one would be surprised if these two dive into the sheets during plotting sessions. It won’t be a bona fide romance story, but it may make for some steamy love scenes!

An old friend and colleague of Kyle’s enters the Genoa City scene in early June, and he’ll create a ton of buzz on the Y&R, heading into the summer months. Speaking of, word has it that he’ll hook up with Summer, causing Kyle a bit of jealousy. Is Theo a friend of Kyle’s though? Or has he popped into to town to purposely get under Abbott’s skin?

Y&R spoilers seem to hint that love, well, more like lust, will blossom between Summer and Theo. Summer is bound to clue into the fact that she’s making Kyle jealous by hooking up with Theo, and she’ll turn on the heat to drive Abbott crazy. She won’t be the only one tuned into Kyle’s jealousy, as Lola is bound to put two-and-two together. This spells huge relationship issues for Kola.

Y&R spoilers tease that Celeste Rosales is set to enter Y&R storylines and soon, when actress Eva LaRue joins the cast of the show later in June. Despite his nose being out of joint when it comes to Summer and Theo, Kyle will pop the question to Lola, which will bring Momma Bear into town. She is sure to wreak havoc in the Kola relationship.

These two are an unlikely pair, and Traci may not seem at all like Cane’s “type;” however, stranger couples have come together in the land of Genoa City. There’s something about Traci’s genuine heart and personality that has had many leading men in the past simply swoon. They are friends now, but as June progresses, Traci and Cane may become something a lot more.

Not only does he have to play the role of mediator with his children, but Y&R spoilers are hinting that The Moustache may have to battle a huge illness, with this all being revealed as the days and weeks go by. Victor hates appearing weak to anyone, so he and Nikki may keep it under wraps for a bit. When he does let his children know, all hands may be needed on deck to run Newman, meaning that Vicky, Nick, Adam, and possibly Abby, will have to be pulled in to run things while Victor fights this illness. Will it bring the siblings together or push them farther apart? 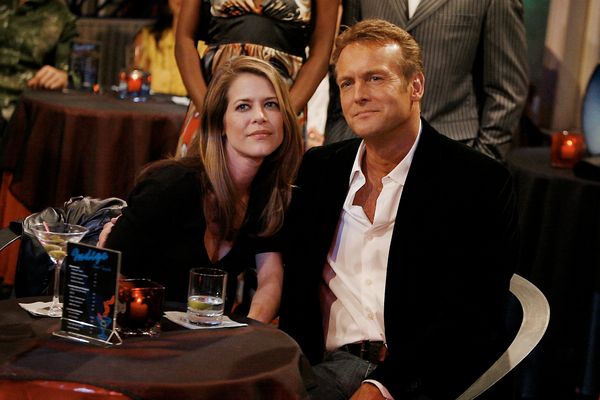