Young and the Restless: Plotline Predictions For Spring 2021

Spring is right around the corner, which means storylines are about to sizzle on the Young and the Restless (Y&R)! Will the truth come out about little Harrison being Kyle’s son? Will Jack and Sally continue to move forward? Will Abby’s surrogacy plans continue to move smoothly? There’s nothing viewers love to do more than speculate! As such, below are some Y&R plot predictions for spring 2021.

It’s clear that Tara wants Harrison’s true paternity to stay a secret. The Lockes don’t seem to have a carefree, happy-go-lucky, relationship. Could Ashland be much darker than everyone realizes? Could Tara be in a controlling and abusive relationship? She may not be concerned about the truth coming out, she may be fearful of it.

12. Ashland Will Have An Affair

Ashland is sure to engage in an affair with someone in Genoa City in spring. He seems the type that likes to have his wife under his thumb, while he does whatever he wants. Maybe that’s why Tara cheated on him in the first place? Could Victoria be someone that turns Locke’s head? He seemed quite impressed by her during her presentation. Vic is also very vulnerable right now, trying to get over Billy, plus, not feel so alone. They may have a one-night stand or ongoing thing.

11. Ashland Will Garner A Guess

Back to the Kyle/Tara affair, Ashland was looking very intently at the way they interacted the other day, so he may garner a guess that something is up between the two, or something was up. The fact that Kyle and Tara had an affair should come to the surface by the time spring turns to summer. Secrets like that don’t stay hidden for too long in the world of daytime drama.

What if Ashland already knows that Harrison is not his and that Tara had an affair? Maybe he can’t have children himself and the entire affair with Kyle was planned to give the Lockes what they want, and what Ashland could never do. Locke seems way too smart to not know his wife had an affair with him and that his “son” is not his bio son.

9. Sally Gets A Friend

Other than Lauren and Jack, Sally hasn’t made any friends in Genoa City since she landed. They may be about to change. While Tara does remain guarded, these two women could get a lot closer over the coming weeks and months. Especially if the Lockes find themselves in town more and more, and if Ashland and Jack continue to get chummy. This will make Kyle nervous, and perhaps Sally lets it slip about Tara and Abbott’s affair?

8. Sally and Jack Get Hitched

Over the next three months, Jack and Sally are bound to get more serious. In fact, as they both are strong personalities that know what they want, their relationship will feel right. Some may think that wedding bells might be too soon; however, Spectra and Abbott will brush off anyone else’s opinion and go for it. This will infuriate Phyllis, Summer, and Kyle.

7. Baby Abbott On The Horizon

Could Sally end up expecting this spring? Anything is possible in the land of Genoa City, and if this were the case, Jack would be over the moon. Kyle would feel weirded out and Summer and Phyllis would be grumpy about it; however, Spectra could help fulfill a wish Abbott has had for decades now, and that is to be a real father to a child of his, from the beginning.

6. Phyllis Will Be Relentless

Regardless of a baby or not, the closer Sally and Jack get, the more infuriated Red will get. She’ll cross a line to make Spectra look bad or “expose” her, but all she’ll be doing is placing a spotlight on her own scheming and manipulative nature. Could she lose Nick in the process of trying to “get even” with Sally and break her and Jack up? Things could get out of hand.

Abby’s road to motherhood may not be as easy as she hopes it’ll be. Could Mariah end up expecting, only to suffer a miscarriage? Rather than try again, Copeland may feel it’s best to pack up and move on. This would leave Abby devastated and looking for another surrogate. Perhaps the process won’t be easy on Mariah, and she’ll have to do it multiple times for the egg to implant. Copeland could second-guess everything after the first try doesn’t take.

There’s also a good possibility that Mariah lands with child after the first go. Maybe even multiple children! While Abby adores Chance, time doesn’t always make the heart grow fonder. Without a partner around to lean on, could Devon be someone that Abby turns to during the ups and downs of this journey? He is technically her baby’s daddy! With Amanda and Elena slowly seeping out of the picture, Devon and Abby could get a little closer these next few months. Nothing will happen between them right away, but they will bond over Abby’s journey and Devon’s role in it.

Speaking of Amanda, Y&R spoilers imply she’ll get a call from someone in early spring for help. Could this be from her mom Naya or half-sister Imani? What if they need something from Sinclair? What if Naya needs a blood transfusion/bone marrow/transplant and the only one who can help is Amanda? What if Imani is the one in need and Naya reaches out?

Regardless of who needs it, Amanda is the type of person who would help out. She’ll think about it all, weigh out the pros and cons, and probably draft up a legally binding agreement, but Amanda will help her bio family when all is said and done; despite the resentment from Imani, and the secrecy that was needed around her relationship with Naya. In the end, Amanda will start to bond with Imani this spring, and strengthen her relationship with Naya.

Y&R spoilers hint that Chloe will protect Chelsea at all costs in the weeks ahead. What if Chelsea ends up doing something unlawful in her pursuit to get back at Adam and Sharon? Will Chloe help cover up anything Lawson does? Even if it causes harm to someone innocent in the situation? What if Faith gets into all of this? What if Chelsea is the one who is texting Faith? What if she lures her into a dire situation? Would Chloe be willing to protect Lawson if she crosses a terrible line? 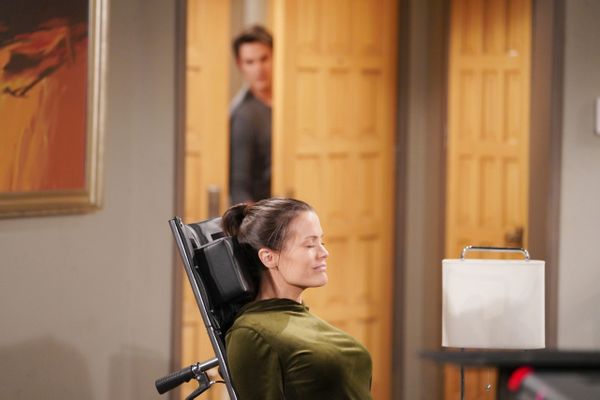 Young And The Restless Plotline Predictions For The Next Two Weeks (March 22 – April 2, 2021)