Calling all Young and the Restless (Y&R) fans! What’s set to unfold in the land of Genoa City over the next two weeks? Christian LeBlanc (who portrays Michael) will celebrate 30 years on the soap! Meanwhile, Sharon will try to surprise Nick, and there’ll be more drama between “Chabby” and Devon! Learn about these storylines and others in the below Y&R spoilers for January 10th to 21st, 2022.

The Monday, January 10th episode will be a show dedicated to Michael Baldwin. Actor Christian LeBlanc is celebrating 30 years in Genoa City, and the standalone epi will honor Baldwin’s career and life. Fans should expect some past clips, as Michael reflects on the last three decades. In other related teasers for the week of January 17th, a new challenge will be presented to Baldwin. Will he accept it?

Across town, Y&R spoilers indicate that Sharon will look to surprise Nick with something. In other teasers, she’ll recruit her current hubby, Rey, for some help. Will they pull off the surprise? Not many can catch Mr. Newman off guard. What does Sharon have in store for her ex? Fans will have to tune in to find out!

Over to the Chancellors, Y&R spoilers for this coming week hint that Abby will continue to worry about Chance and how his transition into family life is going. As Friday hits, she’ll encourage her hubby to get help. This is a great start, but is it too late? Seems as if Devon and Amanda might be around the corner and ready to launch a legal attack.

Across town, Y&R spoilers for the week of January 10th note that Amanda will give Devon her full support to pursue a larger role in Dominic’s life. As the weekend hits, the super couple will set up a meeting to talk “strategy”. In other related news for the week of January 17th, Devon will give Abby a reality check. Looks like the custody war is on between these two friends.

Over to the Newman family, Y&R spoilers for the week of January 10th reveal that Vicky will offer her dad a proposal and the Moustache will consider it. Could this be something that ends up causing friction between the father and daughter? Vicky and Victor do tend to butt heads when it comes to business.

Speaking of the Moustache, Y&R spoilers for the week of January 17th suggest that Victor won’t budge on an issue in an effort to protect his legacy. Does this have to do with Vicky’s proposal or something else? This likely has to do with Newman Enterprises, so whoever is launching an attack, they’d better watch themselves!

Across town, Y&R spoilers for the coming days imply that Ashland Locke will try to rail through Lily. He’d better watch himself, as added teasers state that Lily will stand her ground against the great Locke-Ness Monster. She looks sweet and cute, but Winters is no pushover, and it sounds like Ashland’s about to learn this.

Meanwhile, Locke won’t only be dealing with Lily this week, but also her boyfriend Billy. Y&R spoilers reveal that Ashland will be skeptical about Billy’s change of tune. Locke has every right to raise an eyebrow. After all, this is Abbott, who plays a good game of scheming when he needs to. Still, Billy-boy has had a change of heart and is ready to push forward, so here’s hoping everyone can move on.

Back over to Adam, Y&R spoilers for the coming days indicate that Sally will extend an interesting invitation to Mr. Newman. Will he accept or reject the redhead? These two clearly have chemistry and seem to be playing back and forth. Will the two solidify their romance this week? Fans will have to tune in to find out.

2. Time To Push Some Buttons

If Sally and Adam cross a line in the coming days, they may have his ex to contend with. Y&R spoilers note that Chelsea Lawson will work overtime to push Spectra’s buttons in the week ahead. Can Adam’s baby mama succeed in throwing Sally off her game? Only time will tell.

1. Some Bad News Up Ahead

Lastly, as the week of January 10th comes to a close, Y&R spoilers hint at some bad news coming Chelsea’s way. Who will give her this “news”? None other than Adam. Here’s hoping Mr. Newman takes cover after he tells Chelsea the upsetting information, as she may offer some bad attitude in retaliation. 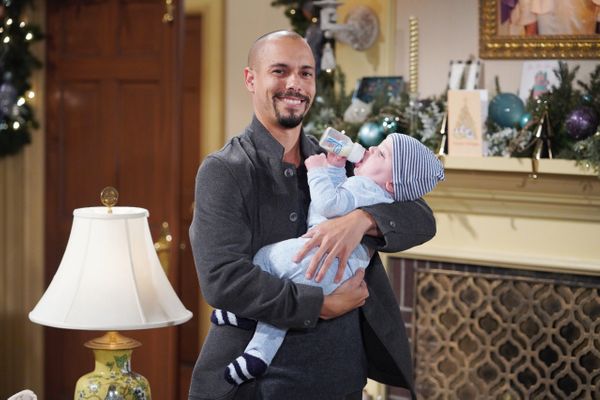 Y&R Weigh In: Should Devon Be Granted Shared Custody Of Dominic?