Calling all Young and the Restless (Y&R) fans! If you thought this week was shocking, just wait until you see what’s in store for the coming one. Shocking secrets are revealed, and a huge twist in the J.T. murder storyline is on the horizon! Learn about this story and others, in the below Y&R spoilers for the week of March 18, 2019.

Seems like all arrows are pointing to that idea! Y&R spoilers suggest that Nick, Billy, and Victor will team up to try and track Hellstrom down, right before their ladies are about to be sent to prison. In fact, they’ll stage a plan to help them escape and keep them in a discreet location until they can get the evidence they need to ensure the ladies’ freedom.

Y&R spoilers tease that little Katie will tell Billy about her “secret friend” at the Newman Ranch. In fact, she’ll reveal that he sang her a song that J.T. used to. Billy will put two-and-two together and realize that J.T. is still alive. He’ll reach out to Nick, and the boys will come up with a plan to save the women from their prison sentence. Victor will be in on it too.

Nick and Billy intervene as Vicky, Sharon, and Nikki are being sent to prison. They’ll hide the women at the Abbott Cabin in hopes that they can stay there until J.T. is found alive and well. The boys’ teamwork will be stellar, and they’ll bring Victor into the fold. Together, the three will come up with a way to lure J.T. out, trap him, and prove the women’s innocence.

Most newlyweds head on a honeymoon after their wedding, but Kyle will be by Lola’s bedside this week. He’ll tell her the situation and truth around why he married Summer. Lola will be quite touched by Kyle’s actions, but she’ll also be sad about his marriage to Summer, as this now stands in their way of being together.

Secrets are about to come out on the Y&R this week! Spoilers indicate that Arturo will reach out to Abby regarding a confession. Does this have to do with Mia, or something else? Here’s hoping that this doesn’t affect their pending nuptials in a negative way, they make a fantastic couple.

Actress Brytni Sarpy, General Hospital’s Valerie Spencer, will be joining the cast of the Y&R this week as Elena. She’ll be connected in the storyline related to Ana and Devon. Expect sparks to fly between Elena and Devon, as the truth around what Ana is hiding will be exposed this week. There’s also a very good chance that this new character may be a new love interest for Devon.

Y&R spoilers tease that Devon will do a bit of digging around to find out what Ana is hiding. It seems that he’ll confront his sister on what has been going on, and everything will be exposed. Moreover, the truth around Ana’s secret will shock Devon to his very core.

Y&R spoilers hint that Ana will fill up a brown envelope with money and head to a dingy motel. Devon will follow her, knocking on the door of a room there. Elena, Brytni Sarpy’s new character, will answer the door and inform him he’s not in the right place. Devon doesn’t give up at that point, and the shocking truth is revealed.

Y&R viewers need to take note! There will be no new episodes on Thursday, March 21st or Friday March 22nd this coming week due to CBS’s basketball coverage around March Madness. The show will be pre-empted until Monday March 25th. Can fans hold on for four-day break from the daytime drama? It’ll be a hard thing to do! 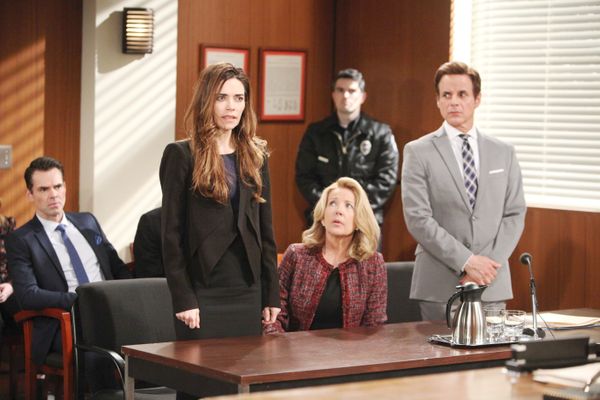 Young And The Restless: Spoilers For March 2019