Young And The Restless Spoilers For The Week (October 4, 2021)

Calling all Young and the Restless (Y&R) fans! What’s set to unravel in the land of Genoa City over the next week? Sally impresses, while Ashland hopes Nick stays hush-hush. Also, Vic has second thoughts. Learn about these storylines and others in the below Y&R spoilers for the week of October 4th, 2021.

Y&R spoilers for this coming week reveal that Sally will impress Chloe. Spectra will finish up Victoria’s wedding dress; however, Mitchell will wonder how her redheaded colleague will be able to get Vic to look at it, let alone agree to wear it. This is why Sally will start scheming this week. Has she ever stopped?

Y&R spoilers for the week of October 4th note that Sally will look to Adam for a favor. She’ll jump on the Newman jet to head to Tuscany, and he will have reservations about her intentions. Added teasers suggest that Spectra will reason with him in the hopes that she can present the dress to Victoria… without the soon-to-be Mrs. Locke realizing who was behind the design. Will she succeed?

Speaking of Locke, Y&R spoilers indicate that Ashland will ask Nick to stay quiet about what he knows. Will Newman agree to this? Unfortunately, added teasers state that Vic will realize her fiancé has built his legacy illegally. In fact, she’ll start to have doubts about whether or not to proceed with the wedding.

6. A Conflict Between The Newmans

Over to Nikki and Victor, Y&R spoilers imply that they’ll attend Summer and Kyle’s wedding and look forward to their granddaughter’s ceremony. Added teasers suggest that the two will bicker as they arrive in Tuscany. What’s the conflict about? The good news is that fans will see Summer and Kyle in the coming days. The bad news is that whatever happens at their wedding could leave the Moustache and his wife in a disagreement.

Y&R spoilers also indicate that Nikki will notice the tension between her daughter and Ashland. She’ll talk to Vic in private and encourage her to back out of the wedding. In added teasers, it seems as if Vicky will feel like things are far too complicated to do so. Victoria wants to protect the Newman-Locke merger at all costs. However, her heart isn’t into this anymore. Will she go through with her “I do’s”?

Meanwhile, Y&R spoilers imply that Adam might have a very important job at the Locke-Newman wedding. He’ll be instructed to keep Billy-boy at bay. Added teasers hint that Abbott will have some stunning information and struggle about what to do with it all. This is Billy, though, so he’ll likely decide to expose the news — especially if it’s about Ashland.

Perhaps Billy decides to go through with stopping the wedding or revealing the “information” he has to Victoria. Y&R spoilers for the week of October 4th note that the Moustache will stop Billy’s plan, at some point over the coming days. Does this mean Victoria and Ashland will go through with their nuptials?

Actor Rory Gibson debuts as the Noah Newman recast this coming week. He’ll likely arrive on the scene for both Skyle’s and Locke-Newman’s wedding events. It’ll be interesting to see how he interacts with family and friends, and what storyline he might be diving into as he re-enters the land of Genoa City.

1. Devon Gets Something Unexpected From Amanda

Finally, Y&R spoilers for the week of October 4th state that Amanda will do something unexpected for Devon in an effort to keep their romance “interesting”. With that said, added teasers reveal that he and Abby will continue to bond. Sounds like she’ll still be struggling with the absence of Mariah and Chance. Hamilton will be her go-to support system. 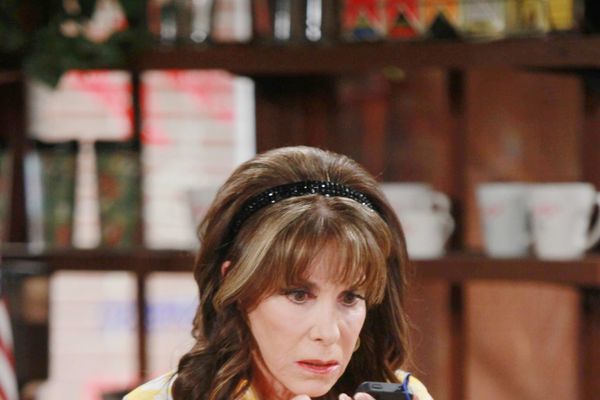