Bold And The Beautiful: Plotline Predictions For April 2021

Speculation teases April will kick off with a whodunnit when someone loses his or her life, this month on the Bold And The Beautiful (B&B). Also, when Liam doesn’t show up to meet Hope, could he be hooking up with someone else? Plus, Zende’s date with Paris doesn’t go as well as he’d hoped. Read on for 12 B&B plotline predictions for April 2021.

Spoilers indicate Zoe will not give up on Carter just yet. He tried to make it clear that he no longer trusts her after she went behind his back with Zende, but she’ll be determined to win him back.

Speaking of Zoe, rumor has it she’ll be secretly pleased when Paris tells her about a particularly disastrous dinner date with Zende. The date itself will be a comedy of errors, with one disaster after another. Paris will be slightly upset and maybe a little peeved and will vent about it to her sister.

When a new man enters her life, Quinn will be stunned. Unknown to her husband Eric, she’s been harboring a secret for years now – a secret son she gave up for adoption. B&B speculation indicates Quinn will see Steffy’s engagement ring and realize it was the ring she bequeathed to the child she gave up. This would make her son none other than Steffy’s fiancé Finn.

As per usual, Brooke will meddle in her daughter’s life. She knows Hope has separated from Liam but feels it’s a mistake. “I don’t want Thomas to use this separation as an opportunity to move in on Hope,” Brooke recently told Ridge. And she’s not going to rest on her laurels and let Thomas romance her daughter away from Liam, not by a longshot. She’ll visit Liam and let him know he needs to protect Hope from Thomas immediately.

After Liam listens to Brooke’s tirade against Thomas and what a danger he is to Hope, the Waffler will attempt to win his wife back. Liam will profess to Hope that he can’t live without her. When he moves in for a kiss, she’ll let him. But then she’ll push him away and tell him she asked for a separation for a reason. Hope needs time to make a final decision on their marriage and she’ll tell him he’s not helping.

When the kiss doesn’t go over as well as he’d hoped, Liam may head to the Bikini Bar. B&B speculation teases he may run into Shauna while he’s there. One thing could lead to another and The Waffler and Flo’s mom may end up in the sack. Imagine the scandal and the repercussions!

Hope will become worried when Liam doesn’t show up to meet her for lunch. He’s been trying his best to try to win her back and she’ll be surprised that he’s suddenly gone AWOL. Hope will text and call him several times and will receive no response. But where could Liam be, maybe drowning his sorrows with Shauna?

5. Does Vinny Have A Secret?

Rumor has it, Vinny knows a secret. He tried to tell Finn and Thomas in the lab but after Finn punched him, he decided to hightail it out of there rather than risk another wallop. But what secret is Vinny privy to and could revealing it to the wrong person cost the small-time drug dealer his life?

Speculation teases someone else’s paternity could come into play this month. While working in the hospital lab, did Vinny uncover another secret? As he changed the results of Steffy’s test, he may have also taken a closer look at the paternity test she took when she was pregnant with Kelly. Did he discover that Liam isn’t Kelly’s father after all, Bill is?

Speaking of Dollar Bill, all the spoilers regarding the B&B April murder mystery suggest the Spencer Publications magnate is heavily involved. Will Vinny try to extort money from Bill to keep Kelly’s true paternity confidential? If so, this could explain why Bill may become a prime suspect, if Vinny is the person who loses his or her life.

Other predictions indicate that Vinny isn’t the only one who could meet his demise in early April. Other potential victims include Katie, Thomas, Shauna and Flo. B&B Executive Producer Bradley Bell promises the element of surprise will be at work in this murder mystery. One thing’s for sure, fans will surely be on the edge of their seats as it all plays out.

Rumor has it, an emotional identification will take place by someone who knows the deceased person. Will it be a tearful Thomas identifying Vinny, the friend he’s known since he was a kid, or will someone be identifying Thomas? Could it be Wyatt weeping when he sees his fiancé lying on a slab or a devastated Bill looking at a deceased Katie? Or will a stunned Flo be forced to identify her mother Shauna? Stay tuned to B&B to find out! 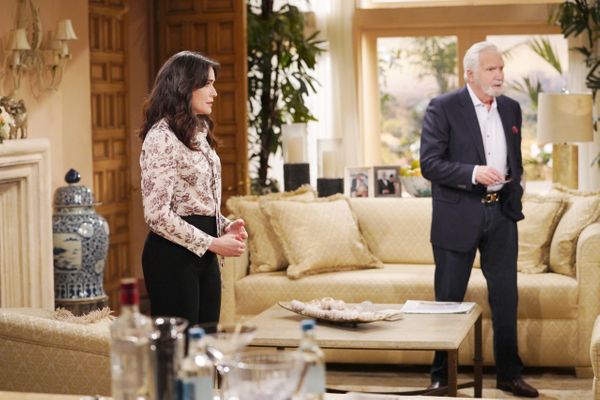 Bold And The Beautiful: Spoilers For April 2021