Bold And The Beautiful: Plotline Predictions For January 2022

Will Brooke tell Ridge the “whole” truth about New Year’s Eve? Will anything more come from Paris and Carter’s lip-lock? How will Sheila continue to manipulate the situation? It’s a brand-new year in the land of The Bold & The Beautiful (B&B), and fans can’t help but speculate on storylines! As such, below are some B&B plotline predictions for January 2022.

12. Brooke Will Continue To Lie…

Brooke was kind of (sort of) honest about New Year’s Eve. She did tell her hubby that she had a few drinks; however, she didn’t tell him who she was with at the time! She’ll continue to keep that secret hidden from Ridge. There’s no way she’ll come clean anytime soon. Little does she know, there’s a sweet little kid who caught her kissing “Santa Claus” and may spill the beans to someone.

11. Douglas Will Tell Someone

There’s no doubt that Douglas will accidentally tell someone that he saw his grandmother kissing Santa Claus. After all, he tried to tell Liam, but he wasn’t exactly “listening”. Perhaps he’ll mention it to another child first — a cousin or sibling. Maybe the children will start to argue about whether or not Santa is real, and little Douglas will tell them he is — because he was kissing his grandmother on New Year’s Eve!

What Douglas saw will likely come out in January. Whether the little one tells his parents, another adult or child, the truth will come out. If Douglas discusses it with another child and an adult overhears, they may end up spilling Brooke’s secret. Taylor or Steffy could be the person who learns the truth, or maybe even Sheila? Then there’s the possibility that Douglas will tell Hope outright! With that said, this will probably happen closer to the end of the month.

If Sheila finds out about Brooke and Deacon’s night, could she blackmail her? Ms. Carter has it out for the blonde in a bad way. Maybe that was the point of tampering with Brooke’s non-alcoholic champagne on NYE; Sheila likely knew that Brooke would get drunk, and Deacon would slide in for some fun.

8. Brooke Pushes Deacon Out Of Her Life

B&B spoilers note that Brooke will disassociate herself from Deacon in January. She’s struggling with guilt, and the best way to forget about her night with her ex is to not see him at all. Deacon has made plenty of strides with Hope (and Liam) lately. Can Brooke easily erase Deacon from her life without upsetting her daughter? Hope will probably raise an eyebrow at her mom’s actions, especially since she was so supportive in the recent past.

7. Stuck In The Middle Of Dysfunction

B&B spoilers for January note that Hope will support her mom’s sobriety, but also continue to see her father. She may feel an immense amount of pressure. She wants to be a good daughter to both her parents; however, with her mom shutting her dad out of her life, this will create stress for Hope. Could this also affect her relationship with Liam?

6. Brooke Confesses To Her Sisters

Brooke will struggle with all she’s done. She’ll feel conflicted about not only falling off the wagon but also kissing her ex. Brooke will need to get things off her chest and tell someone what she’s done — someone she can trust. Could she turn to either of her sisters to confess? Will someone else overhear what she’s done with Deacon as she’s confessing?

5. Ridge And Taylor Get A Little Closer

Ridge and Taylor will continue to reconnect in January. While he’ll remain utterly supportive of his wife, especially in light of the NYE drinking stumble, B&B spoilers hint that Taylor will become a “safe place” where Ridge can talk about his feelings. This means that as Brooke struggles with sobriety, Ridge will turn to his ex to talk about how hard it is to cope with his wife’s issues. How will Brooke feel when she learns Ridge is telling Taylor all about their marital problems?

4. Steffy’s More Motivated Than Ever

As Brooke deals with falling off the wagon, Steffy will be more worried than ever about her dad. She’ll be concerned about his well-being, especially because of the new stress placed on his shoulders. As such, she’ll become that much more motivated to push her mom and dad together. Will she concoct some schemes to get them alone? Most likely!

B&B spoilers for January suggest that Paris will stun Carter and Zende. Could she suggest an open relationship with both of them? She is very open-minded and may think nothing of the idea. Then again, she could decide that she’s not interested in a “romance” or “commitment” with either man. Teasers hint that both Carter and Zende will be caught off guard… so does she possibly suggest something else?

B&B has done some pretty contentious storylines as of late, such as when Eric allowed his wife to be with Carter, due to his issues in the bedroom. Could the soap opera decide to cross a line and have Paris suggest that she, Zende and Carter spend a night together in the bedroom? It’s a divisive concept, to say the least, but would any viewers be floored if the daytime drama decided to go that route?

B&B spoilers for this coming month hint that two new characters will be added to storylines: a new Forrester Creations employee as well as an unexpected relative. Actress Cassandra Creech (photographed below from her stint on Days Of Our Lives) will join the soap on January 10th playing Grace Buckingham, Paris’s mom. That may be the “unexpected” relative, but who will be the new Forrester employee? How will they wreak havoc in the land of fashion? Is it possibly a new love interest for Donna, or someone for Thomas? Only time will tell. 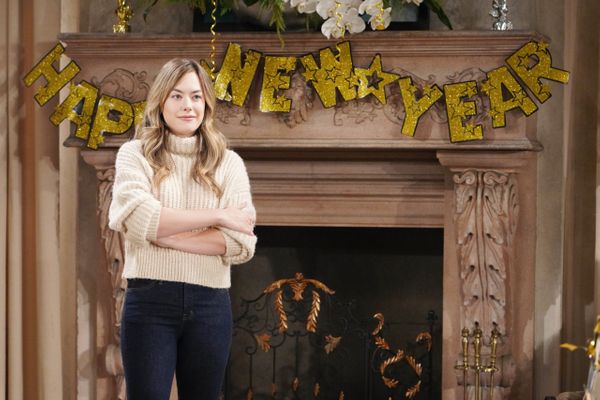 Bold And The Beautiful: Spoilers For January 2022