Bold And The Beautiful Plotline Predictions For The Next Two Weeks (March 29 to April 9, 2021)

Speculation teases Liam will be in for a surprise when he sees the Steam mural has been replaced on Steffy’s wall, coming up on the Bold And The Beautiful (B&B). Also, Brooke will put Thomas on notice. Plus, someone is going to meet their maker and Bill will be involved. Learn more below in the B&B plotline predictions for March 29 to April 9, 2021.

Liam will eventually seek out Steffy, so he can pour out his sob story about Hope. His wife asked him for a separation for cheating on her with Steffy, so if anyone can sympathize, he assumes it will be his ex. But he’ll get a surprise when Finn answers the door at the cliff house. Liam will find out Finn is living there now, and he’ll no longer be able to come and go as he pleases.

Speculation teases Liam will be stunned when he realizes the large Steam mural has been taken down from Steffy’s wall. It’s been replaced with photos of Finn and Steffy. He may even accuse Finn of taking it down. But Finn will triumphantly respond that Steffy removed it to signify her love for him.

Hope will tell Douglas she and Liam have separated. It’ll be a tough conversation and she’ll be grateful when she gets an assist from Thomas. Thope will tell their son that just because Hope and Liam won’t be together anymore doesn’t mean they will love him even less. And of course, he’ll always have them to turn to.

9. Thomas Gets On Brooke’s Last Nerve

Brooke will encounter Thomas after he and Hope have explained Lope’s separation to Douglas. She’ll ask him why he needed to be at the cabin, and he’ll try to clarify why he was there. But it won’t be good enough for Brooke and she’ll blast Thomas for trying to get close to her daughter again.

Brooke’s conversation will not go over well with Ridge. He’ll overhear his wife berating his son and will confront her about it. Brooke will be forced to admit to Ridge that she still doesn’t trust Thomas around her daughter. Bridge will argue, but will the issue of Thomas drive a wedge between the couple again?

Never one to leave well enough alone, Brooke will decide to approach Liam for his help. She’ll tell him she suspects Thomas is going to pursue Hope and she needs Liam to assist her in keeping her daughter safe. Brooke will encourage Liam to reach out and make a romantic gesture towards his wife and he’ll take Hope in his arms and kiss her.

Rumor has it, Shauna will be thrilled by her daughter’s good fortune. She’s been accepted back into her father Storm’s family and the Logan sisters even presented her with documents changing her last name from Fulton to Logan. Now she’s engaged to the man that she loves. Shauna will spread Flo’s happy news to her bestie Quinn in the coming days.

Katie will also be excited and pleased when Flo tells her she may not be a Logan for long. Her aunt will say she couldn’t be happier about her engagement to Wyatt and will ask her niece if they’ve set a wedding date yet. Bill will have similar sentiments to impart when he offers his congratulations to his son.

Not everyone is thrilled by Flo’s good news. Hope will not exactly be pleased when she hears Flo now legally bears the Logan name. And when Flo reaches out to, speculation teases Hope will explode. She’ll tell Flo she can’t stand her and will never forgive her for her part in Beth’s kidnapping. But will anyone overhear Hope blasting her cousin?

Speculation teases someone on the B&B is going to meet their maker on April 5 and Bill will be tangled up in the fallout. But who will it be? It could very well be Vinny who faces his end in the next two weeks. After changing Steffy’s paternity test, the list of suspects wanting to kill Vinny is long. So, will Vinny be the murder victim?

Many are speculating the other potential victim of the murder mystery could very well be Flo. She seems to be getting everything she’s ever wanted these days which, in soap opera land, usually leads to a big downfall. Will a newly engaged Flo be murdered and if so, will Hope be a prime suspect? Keep watching B&B to find out! 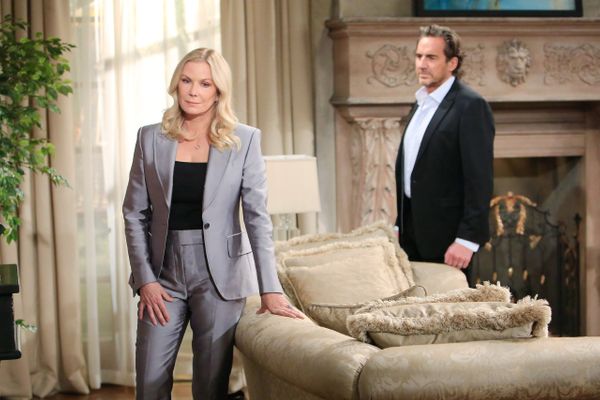 Bold And The Beautiful: Plotline Predictions For Spring 2021