Someone in Los Angeles will meet their demise, coming up on the Bold And The Beautiful (B&B). Also, Quinn and Zoe pull an April Fool’s Day prank on Paris. Plus, Hope will tell Flo she does not accept her as a Logan. Learn more below in the B&B spoilers for March 29 to April 9, 2021

Spoilers tease Shauna will visit Quinn and they’ll celebrate Flo and Wyatt’s engagement. Shauna will also fill Quinn in on Flo being accepted by the Logan family. The besties have been rooting for their children to get married since they were in high school. They will break out the champagne and toast the happy couple.

Speaking of Flo, Hope will blast her when her cousin reaches out. Spoilers tease Hope will be hurting, and she’ll tell Flo she doesn’t care if her mother and her aunts have forgiven her. Hope will also make it crystal clear to Flo that she hasn’t forgotten what she did. She will never forgive her from keeping Beth from her and she’ll never accept her as a member of the Logan family.

Ridge will be displeased when Brooke refuses to admit Thomas has changed. She still has her suspicions when it comes to Ridge’s son and she’ll tell her husband she’s even more worried about what Thomas will do now that Lope has separated. Brooke will tell Ridge she’s sure he’s going to make a move on Hope.

At about the same time, Thomas will assist Hope when she has a difficult conversation with Douglas. She’ll need to tell the little boy that she and Liam have separated. At first, Douglas won’t understand but Thomas will help Hope explain it to him. Thope will tell him they love him and will always be there for him no matter what.

Thomas knows Brooke still doesn’t trust him, specifically where Hope is concerned. This week, he will make an appeal to his father’s wife and plead his case to her. He’ll tell her he really has changed for the better and has no agenda when it comes to her daughter. But it’s still highly unlikely that Brooke’s opinion of Thomas will change, despite what he says.

7. Paris Wants To Be Friends

Paris will tell Hope she can count on her for her support and her friendship. She knows Hope is heartbroken now that she’s separated from Liam and she’ll offer some good advice and then ask if there’s anything she can do. Hope will say her support means the world to her and she appreciates the gesture of friendship Paris has offered.

Speaking of Paris, Zoe will ask Quinn to help her pull a prank on her sister for April Fool’s Day. Rumor has it, the joke will be something quite harmless, but it will nonetheless bring Quinn and Zoe closer together. Quinn will enjoy the sense of merriment she shares with Zoe will remark that she hasn’t had that much fun in a while.

Thanks to involving Quinn in her prank, Zoe will finally have someone in her corner. Quinn will tell her she’s her ally and will offer to help her win Carter back. Zoe will be sure to take her up on it and will ask if she has any suggestions. But will Quinn come up with one of her infamous schemes to lure Carter back into Zoe’s waiting arms?

Rumor has it, Flo will reach out to Hope this week and will stun her with a request. Whatever it is, she won’t get the answer she wants because Hope is going to blast her. She’ll ask her cousin how she has the nerve to ask anything of her after keeping the Beth secret from her for months.

Brooke will ask Liam to help keep Hope safe from Thomas. She’ll suggest that since they’re separated, she suspects Thomas is going to pounce on Hope like a tiger ambushing its prey. Liam won’t like hearing that one bit and he’ll promise Brooke that he’s not going to let it happen. But what will Liam do?

Spoilers indicate Liam will pull out all the stops in a romantic gesture for Hope. Although she’s told Liam she needs time away from her him to get her thoughts together, Hope will nonetheless be impressed by his actions. However, will Hope fall for whatever Liam’s trying to serve her?

1. Someone Meets Their Demise

Rumor has it, April 5 will be a must-see episode for fans. In this unforgettable B&B chapter, someone in Los Angeles will lose his or her life. Spoilers tease Bill will be involved in whatever happens. Possible victims include Vinny, Flo, Liam and even Katie. But who will meet their demise? Keep watching B&B to find out! 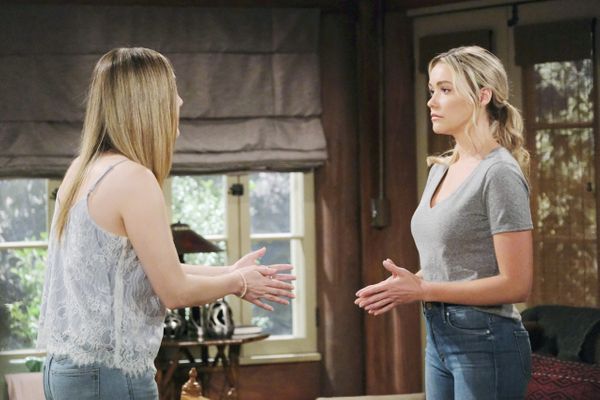