Love is in the air, this week on The Bold And The Beautiful (B&B). A Love Conquers All theme week includes Hope and Wyatt’s leap of faith in Monte Carlo; Rick and Maya’s wedding at the Forrester estate; and Eric and Quinn’s sparsely attended nuptials. Learn more below in the B&B spoilers for the week of June 29, 2020.

Thinking she had been rejected by Liam when he didn’t show up to meet her at the Eiffel Tower in Paris, Hope jetted off to Monte Carlo. She was hoping to find consolation in the arms of Liam’s brother Wyatt. Not only did she find comfort with his sibling, Wyatt proposed to Hope, and she said yes, in this episode that originally aired on August 13, 2014.

When Wyatt implied they get married right away, Hope asked him how that would be possible. He suggested they get married on the Spencer yacht and she agreed. The captain officiated as the couple said their vows to each other. Then they jumped off the ship’s bow as a leap of faith. A smiling captain leaned over the side of the ship and pronounced Wyatt and Hope man and wife.

Surrounded by family and friends, Rick and Maya were married in an emotional ceremony that originally aired on August 12, 2015. Maya’s father Julius had just departed after she told him to leave. He had a hard time accepting his transgender daughter and she only wanted supportive people at her wedding. Rick told Maya she had taught him about true love and courage, and she promised to be a devoted wife to him.

Thomas and Steffy discussed the night Aly had met her demise at Steffy’s hands. She expressed her feelings of guilt about what transpired on the side of the highway. But her brother told her that her guilt was misplaced, and she could have ended up being the victim. “You were protecting yourself,” Thomas said.

When Ridge and Caroline got married, they headed to the beach alone in this episode that originally aired on September 14, 2015. Wearing casual wedding attire in Malibu, Ridge asked his bride to be if she wanted him to call Carter to officiate. He felt, however, that they could say their vows to each other privately beside the ocean and sign the papers at city hall later. Caroline agreed and after they pledged their love to each other, Ridge pronounced them husband and wife.

Eric was heartbroken when he realized the only family member who showed up for his wedding to Quinn was Ivy in this episode that originally aired on September 26, 2016. Quinn suggested to her husband to be that he didn’t have to marry her. But he told Quinn that despite what his family thought, she had changed life for the better and he wanted her to be his wife. Officiated by Reverend Murphy (gossip blogger Perez Hilton), Eric and Quinn then said their I Do’s to each other.

At Forrester, the family lamented their collective decision to boycott Eric and Quinn’s wedding. Zende felt like they were being too harsh, and Thorne felt terrible because he’d promise his father he would be his best man. But Ridge remained adamant that Eric would call it off if none of the family showed up. After the ceremony, Ivy arrived at Forrester and told them Quinn and Eric were married. She asked how them how they felt, abandoning the Forrester patriarch on his wedding day, and breaking his heart.

In a heart to heart conversation with her father Ridge, Steffy told him she was ready to remarry Liam in this episode that originally aired on July 4, 2018. Steam had been planning to get married a few weeks earlier, however, Steffy had postponed it. But she now felt they were more than ready to recommit to each other. Steffy confided to Ridge that she couldn’t wait to tell Liam. After Ridge left, Steffy watched the fireworks alone, looking forward to her future.

Meanwhile, during a Fourth of July party, Hope and Liam watched the fireworks together on a balcony, with other Forrester employees. She took his hand and led him to another balcony upstairs. Hope told him she had big news to share and although she was thrilled, she wasn’t sure how he was going to feel. During a pause in the noisy pyrotechnics, she told Liam she was pregnant. Stunned but happy, he held Hope as the fireworks exploded in the air behind them. 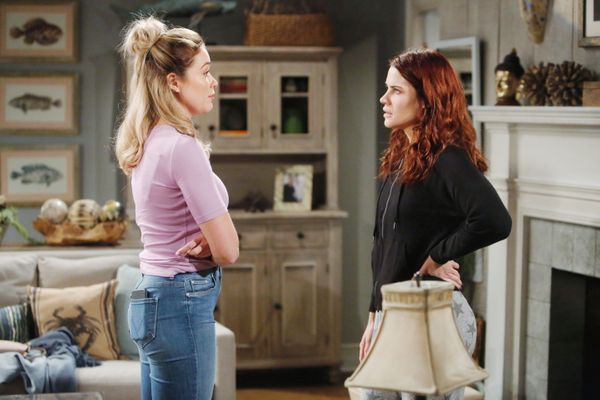