Bold And The Beautiful Spoilers For The Week (September 17, 2018)

This week on the Bold and the Beautiful (B&B), the tension surrounding the pending custody case ramps up a notch when everyone, including Bill, hears the news about Katie and Thorne’s engagement. Also, Steffy and Hope’s business dispute continues, and Bill and Brooke’s rekindled friendship turns passionate. Find out more in this week’s B&B spoilers for the week of September 17, 2018.

Not known for his calm demeanor, hearing about Thorne and Katie’s engagement will further fire the wrath of Bill. Katie will deliver the news personally to Bill and spoilers indicate he’s not going to take it well. Bill will be suspicious of the timing of the engagement and will begin to suspect that Thorne has ulterior motives (including the custody litigation) for proposing to Katie. 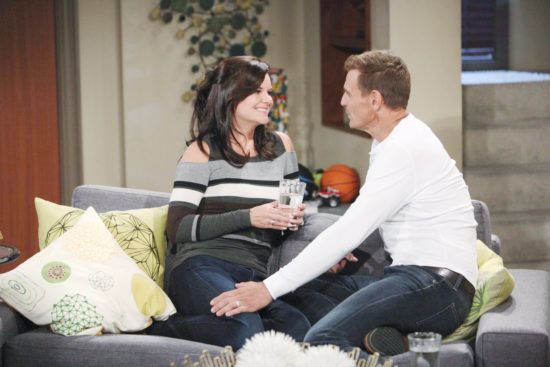 Viewers have noticed Thorne is playing Katie like a puppet on a string. Generally known as one of the stronger female characters on B&B, since hooking up with Thorne, it appears that every one of Thorne’s wishes is Katie’s command. The sole custody bid was all his idea and it has only fueled resentment and rage in her ex-husband Bill and will no doubt adversely affect their son, Will. This is all coming from a man she dated on the rebound after she and Wyatt broke up! Thorne will tell his family this week that he and Katie are engaged but what Katie should do is suck it up, break up with Thorne and start thinking for herself again. 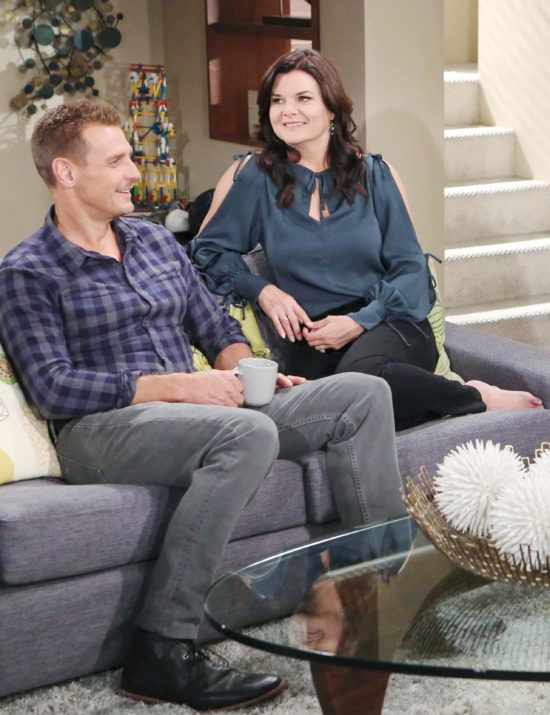 Dick Christie returns this week as B&B’s favorite keystone cop, err Forrester security guard (and Pam’s boyfriend), Charlie. Will he weigh in on the raging custody clash between Bill and Katie or the newly inflamed battle between Hope and Steffy or will there be a Forrester Creations security threat? At the very least, Charlie always provides comic relief and with all the drama expected this week, it looks like the show will need it. 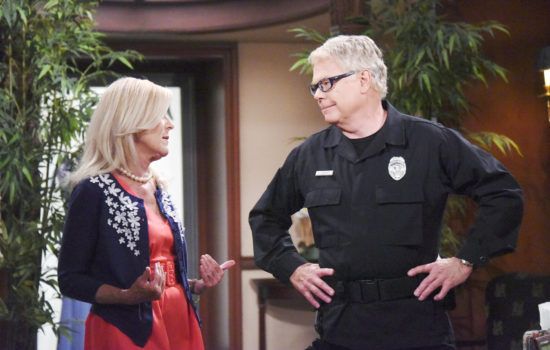 Rumor has it, Steffy and Sally will share an up-close and intimate moment with a shirtless Xander. The ladies will be so impressed with Xander’s assets that Steffy will offer him a modeling position with the Intimates line. Being an Intimates model herself, this will provide Zoe with more opportunities to get closer to Xander, but it will not please Emma, who should be poutier than usual this week. 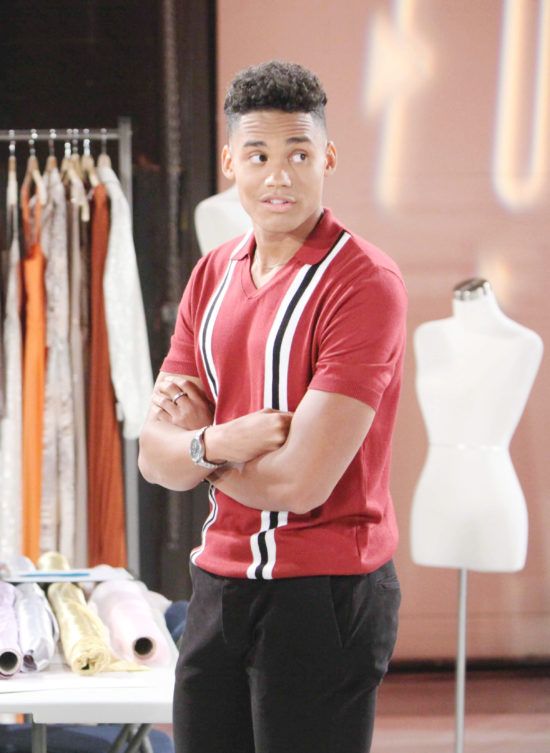 Steffy hires Sally to design for the Intimates line and Hope is not happy about this turn of events. Changing lines is a no-brainer for Sally as Hope had always made it clear she wasn’t interested in even looking at any of Sally’s sketches. Hope tries to stop Sally from switching teams but Steffy puts her foot down. Hope is sure to whine to anyone who will listen that not only did she lose to Steffy in the battle between clothing lines, now Steffy is pilfering her team members. Maybe Sally would have felt a little more loyalty towards Hope if she’d let her design something. Either way, Hope’s loss is Steffy’s gain this week. 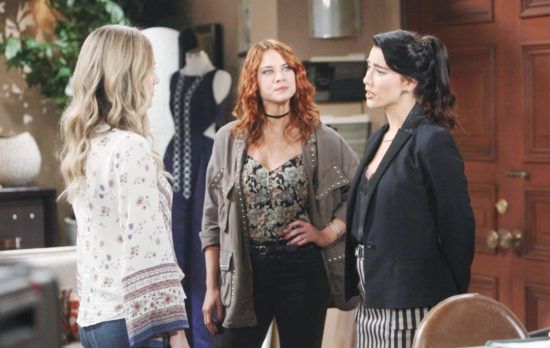 Liam and Wyatt discuss their relationship with their father Bill this week and debate his chances in the upcoming custody dispute with his ex-wife Katie. Both men know exactly what their father is capable of, but they also know he loves their little brother Will. Liam and Wyatt also wonder about Katie’s motivations in suing for sole custody at this point in time. 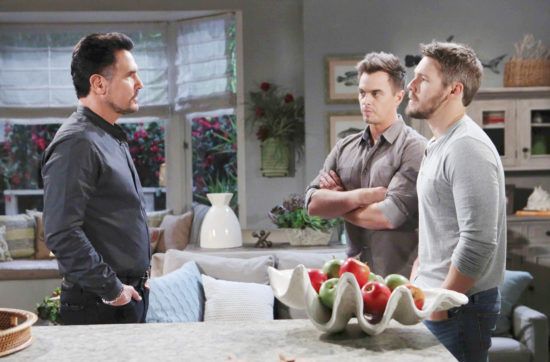 3. Brill Steam Up The Screen

Bill and Brooke continue to meet in secret and although Brooke didn’t get far with Katie in pleading Bill’s case, Bill is still extremely grateful to her. Spoilers are implying his feelings for Brooke have moved to the front burner and after Bill kissed her on Friday’s B&B, Brooke pushed him away, but she didn’t exactly look angry either. Will Brooke be tempted to hop back on her stallion or will she stay loyal to Ridge? 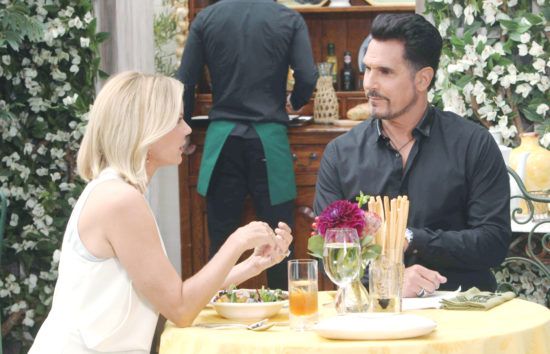 An angry altercation between Bill and “the dressmaker,” as Bill calls Ridge, will lead to both men vowing to make sure the custody of Bill’s son concludes with his desired result. Bill will talk strategy with Justin, his lawyer, right-hand man and best friend, whereas Ridge, hoping to do all he can to help Katie win custody, will make a play right out of Dollar Bill’s handbook. 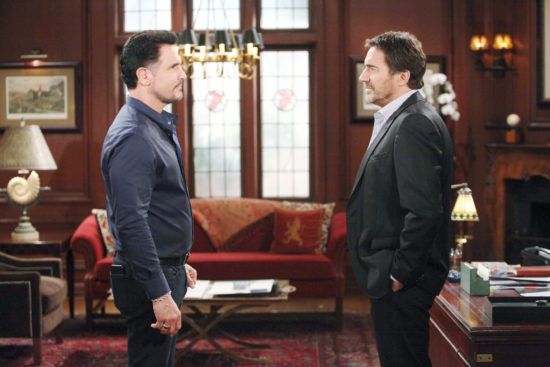 Rumor has it that Ridge will hold a private meeting with Judge Craig McMullen (played by Joe Lando), the same judge who will be overseeing the custody case. He’ll obviously try to skew the judge’s view of Bill and sway him towards a favorable outcome for Katie. The Forrester men always seem to stick their noses in Bill’s business and if Bill finds out about Ridge’s visit with Judge McMullen, viewers can expect all hell to break loose. 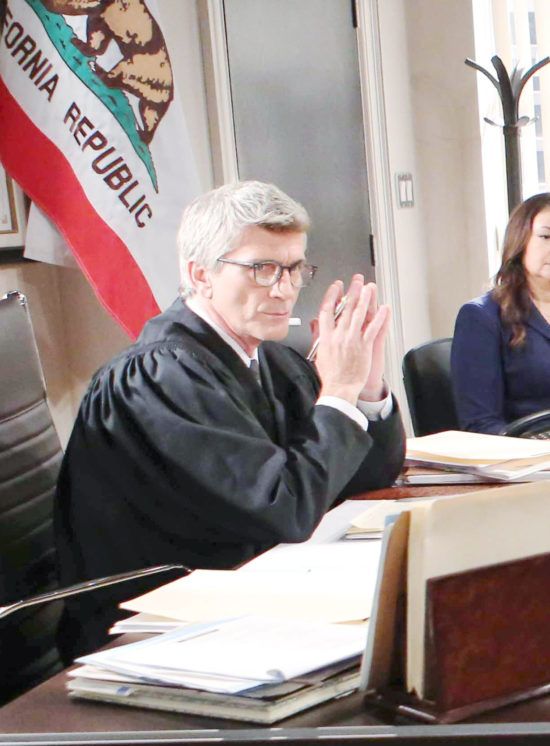 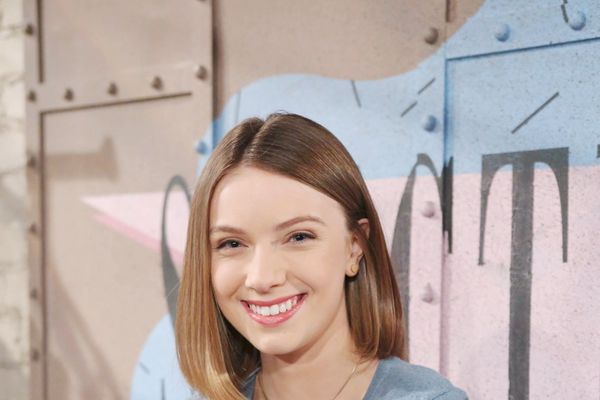