Days Of Our Lives: Spoilers For September 2019

The days may be getting cooler, but things will be heating up in Salem this month on Days Of Our Lives (DOOL). Familiar faces will return and heartfelt reunions will take place. Plus, someone will go through a health crisis and one woman’s heart will be broken once again. Read on for more DOOL crazy and shocking spoilers for September 2019.

In casting news, William Utay returns as Dr. Wilhelm Rolf, who will head back to Salem on September 3. Since he brought Jack back to life in January (sans his memories), will the doctor be returning to help Jack get his memory back this time? Or will his comeback have something to do with Holly and Nicole? Since Dr. Rolf is an expert at reviving the dead (Will, EJ, Tony, Jack and possibly others) maybe he did the same for Nicole after the warehouse fire. Or will there be a more sinister reason for his return?

Once Gabi fires Ben as head of security at DiMera, he’ll need something to do. And he and Ciara will find out some shocking information this month. These two could start their own detective agency, or maybe they could just join an established one and help Velma, Shaggy, Daphne, Scooby and Fred solve mysteries. Spoilers indicate the information they uncover could have something to do with Ben’s former boss Stefan. But what could it be?

It looks like Ben better watch his back this month, as someone is out to get him. Obviously, Victor isn’t cool with his granddaughter Ciara’s ongoing romance with the former serial killer. However, DOOL spoilers tease he’s going to go much further than admonishing Ciara about her dating choices. Victor is going to order Xander to kill Ben. But considering how Xander seems to have turned over a new leaf and recently refused Kristen’s kill orders, will he actually agree to carry out the hit?

Hope will receive a letter from Ted in September, confessing everything he was involved in and asking for her forgiveness and hoping to make amends. She will be torn up about it, as even though she didn’t trust him, she had developed feelings for Ted before he was murdered. Spoilers show she will lean on her father Doug to help her get through it.

Spoilers tease Stefan will receive shocking news in early September. Does he find out his mother Vivian is still alive? And is this the mystery Ciara and Ben will solve? All signs point to yes! Stefan will have a happy and heartfelt reunion with his mother this month, as Robin Strasser joins the cast as Vivian. But will she approve of his new wife Gabi?

After Eric, Jack and Jennifer’s shocking discovery in Chicago, the trio will return to Salem with both Holly and Nicole this month. Eric will be beyond thrilled that his true love Nicole is alive and well and is still in love with him. Will he ask Nicole and Holly to move in with him and where will all this leave Sarah?

6. Sarah And Eric Are Through

Once the real Nicole is back, Eric will dump Sarah faster than he can throw her. Spoilers tease he will reunite with Nicole and Sarah will once again be relegated to second choice, although wasn’t she always? And her husband Rex’s words to her, that Eric will never love her like he loves Nicole, will come back to haunt her, big time.

Once Eric and Sarah break up and Sarah finally stops moaning and crying about it, maybe she will open her eyes and her heart to a man who truly loves her – Xander. He’s been there for Sarah in the past when her heart has been broken and he’ll be ecstatic to lend her a shoulder to cry on again in September. The last time he listened to her woes, they had a one-night stand. Will they hit the sheets once again?

Now that “Nicole” has been unmasked by John as Kristen, will Gabi once again become public enemy number one? Spoilers tease Lani will ream out Gabi this month. It’s true that these two have never really gotten along, and Eli’s grandmother Julie can’t stand Gabi, but when Gabi watches Julie collapse at Horton Town Square and turns a blind eye to it, Lani will unleash her wrath on Gabi.

Speaking of Julie, after collapsing shortly after speaking with her grandson Eli and his fiancé Lani, she will be in the hospital, fighting for her life in September. This isn’t the first time Julie has had a health scare – she fell down some stairs late last year after an altercation with Gabi. Her husband Doug and granddaughter Ciara will keep a vigil by her bedside – will Julie survive?

2. Kristen Continues To Stir Up Trouble

Now that she’s finally been unmasked for all of Salem to see, Kristen will plead and try to bargain with anyone who is willing to listen. And although viewers saw her handcuffed and hauled off to prison, it doesn’t look like she’ll be leaving Salem anytime soon. But what will Kristen be up to next?

Whether he gets his memories back or not, all signs are pointing to a Jack and Jennifer reunion this month. Jack has kicked his wife Eve to the curb, leaving a potential revived coupling with Jennifer. But Jennifer has been hesitant to get back together with Jack since he rejected her so many times when she tried to get through to him about the man he used to be. Will she be willing to take one more chance on him? Stay tuned! 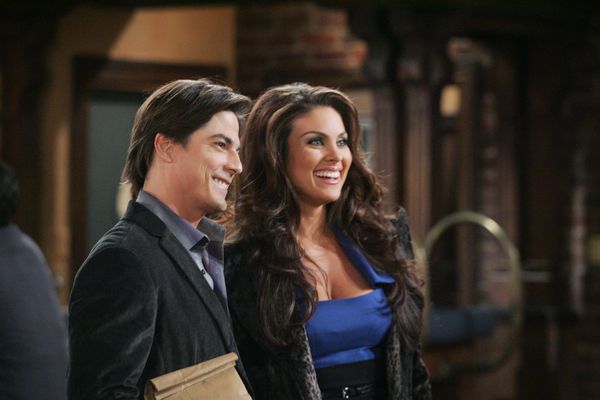