Days of Our Lives: Plotline Predictions For April 2021

Should fans expect a new-and-improved Jan Spears when she returns to Salem? Will Ciara and Theo cross a line? Who’s shot Charlie Dale? What’s going on between Sami and E.J.? Days of Our Lives (DOOL) fans just love speculating on storylines! As such, below are some DOOL plotline predictions for April 2021.

Jan Spears is set for a return to the land of Salem, and DOOL spoilers hint at a confrontation between her and Shelle. What if she awakes from her coma a whole new woman? What if she regrets all she has done in the past and is looking to turn a new leaf in the little town? Can Spears write a new chapter on Days? She might even be able to help John get over his “temper” issues.

While Marlena is set to convince Ciara to undergo hypnosis to gain her “recent” memories back, DOOL spoilers suggest the entire thing could end up in disaster. Could Ciara only remember some of the “bad” stuff she and Ben went through? That would be enough to scare her away from Weston for a while.

Theo’s visits to Ciara seem to place her in a very good mood whenever he drops by. Sounds as if these two will continue to get a little closer over April. Theo still has feelings for his ex and BFF, so there’s nothing that would hold him back. She can’t remember her love affair with Ben, so she’s good to go. They are most likely going to start to get romantic and soon.

Ciara and Theo will likely go on dates in the weeks ahead, and might even share a kiss. Will they cross another line? That’s hard to say. Ciara’s in a time warp where she may still be hesitant around hitting the sheets with anyone because of her assault. While Chase Jennings’ attack happened to her years ago, in Ciara’s mind, it hasn’t been that long.

Ben and Claire will continue to bond over the next month. Misery loves company, and since Ciara is shunning them both out of her life, they will get closer through their common rejection. There will be hints of a romantic spark; however, these two will try and resist. After all, Ben does love Ciara, and Claire doesn’t necessarily want to play second fiddle to that.

Days is going to have to address the issue of Hope. After all, she left the little town in search of Ciara, and now that her daughter is found, she really should be returning to Salem. If the show doesn’t recast the part, perhaps DOOL will write in a storyline where Hope cannot be reached. Or she may talk to Ciara and then decide a new chapter in her life is needed. Maybe with the knowledge that Ciara is okay, Hope decides to join the ISA? She may feel that the best way she can prevent anyone else from going through what Ciara did is by joining the spy agency to remove all the bad in the world!

This storyline should be winding down soon. With Sami and Allie in the clear, new suspects will pop up this month, but they’ll also be crossed off the list. There’s currently a suspicion that Ava, Tripp, or John could be behind the young man’s shooting, but fans will soon learn that neither of these three are behind the crime.

Sami is set to give Lucas an update on E.J. and their marriage. Doesn’t sound like things are going very well. Could they have broken up? Perhaps E.J. has remembered only part of their relationship together; the toxic part, that is. He may have pushed Sami away to the point where she decided to return to Salem.

Speaking of returning to Salem, actor Thaao Penghlis (Andre/Tony DiMera) recently revealed during a podcast that Days has recast the role of E.J. DiMera. He’s set for a comeback on the soap, but no word yet on the actor who is playing him. Could E.J. be the one behind Charlie Dale’s shooting? Plus, will DiMera re-emerge in the little town come April? There’s a good chance both of these things happen!

Ava is set to reveal a secret to Nicole, so could Vitali confess she has feelings for Rafe? There’s a good chance of that! What if Ava’s secret is tied to having another child? Fans had no clue that Ava Charlie existed, so what if it turns out that Charlie had a twin? Could he be behind Dale’s shooting? What if this “other” child is a girl?

2. Eric and Nicole Break Up

Eric has been in Africa since the fall and hasn’t seen Nicole in months. DOOL spoilers hint at more bad news for Nicole in April, so there’s a good chance he plans to come for a visit and these plans fall through, yet again. Could Nicole and Eric be headed for a breakup? What if Eric has found someone else? Maybe that’s the “bad news” for Walker this coming month?

Now that Sarah Horton is gone, perhaps Maggie’s other daughter will return to town for a visit. The last time she came, she caused quite the chaos. Could she come back to make amends with Maggie? With Xander reeling from his runaway bride, there’s a good chance he might turn to her sister for some comfort. 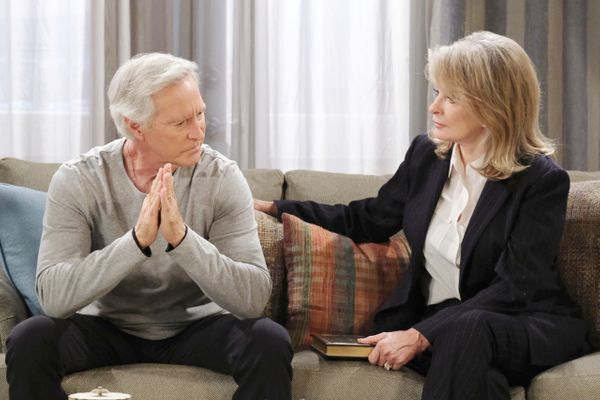 Days Of Our Lives: Spoilers For April 2021