Can the Devil be stopped before 2022? Will Ciara and the baby be okay? Will Philip wind up coming between Roman and Kate? What will happen to Brady? Days of Our Lives (DOOL) fans just love speculating on storylines! As such, below are some DOOL plotline predictions for December 20th to 31st, 2021.

12. The Devil Will Cause Chaos

The Devil will create a ton of chaos over the next two weeks as this storyline winds down. Days spoilers note that Jan Spears will be awakened from her coma by the evil one, and cause trouble for Belle and Shawn. She’s likely the “other Belle” fans have seen in bed with Mr. Brady when the real Belle walks through the door (as featured in the winter preview video from weeks back). But Jan’s presence in Salem will be more of an annoyance than anything else, when all is said and done. Even though Satan’s plan against “Shelle” won’t work, it also won’t deter him.

11. The Grinch Who *Tried* To Steal Christmas

Once Satan realizes that Shawn and Belle weren’t overly shaken by Jan, Spears might be laid back into a coma. The Devil will shake off this umpteenth fail but get angrier in the process. His next focus will be the Horton tree-trimming party. The Days weekly preview video shows the Devil bursting into the Horton home and threatening Julie, Doug, Ciara and Ben, while trying to light the Christmas tree on fire. Yikes!

Days spoilers note that Team Good Guy will rally to protect Ciara and baby “Cin” this week. This means Shawn, John, Belle, Julie, Doug, and possibly others from both the Horton and Brady families will do everything they can to keep Satan away from Ciara. But will they succeed? Of course! Especially with the help of a returning character…

Somehow, the good guys will be able to keep Ciara safe and haul the Devil away. Days spoilers promise that John will get a “Christmas miracle” by December 24th. The Devil won’t be gone; however, Eric will return, join forces with John to save Marlena and rid Salem of the evil one. Fans should expect to see actor Greg Vaughan reprise his Eric Brady role by the end of this week, or early next.

8. They Have Quite The Fight Ahead…

If Eric returns by this coming week, the week of December 27th will be off the chain. Days’ winter preview video showed many scenes between “Marlena”, Eric and John. The Devil will be tied to a bed, as Eric and John do their best to perform an exorcism to release Satan’s hold on Marlena. They’ll succeed, but not without some obstacles along the way.

Actress Eileen Davidson, the original Kristen, will come back during Marlena’s possession, as Satan tries to mess with John and Eric’s mind, and stop the “exorcism” altogether. Much like what she tried to do to John in the crypt, Kristen will taunt and try to seduce Eric. For long-time fans who remember what happened between these two, when the Devil’s version of Kristen brings up “videotaping” themselves, it will likely shake Eric up a bit. Don’t fret, DOOL fans — the two men will succeed in their mission, but there will be hiccups.

Most fans expect this storyline to wind down and finish up during this holiday season. The last time Days told this devilish story in the 1990s, they were supposed to wrap things up during the holidays and wound up extending the storyline until Easter, the following year. Here’s hoping DOOL doesn’t swerve fans and allow this to continue. It’s been a fun walk down memory lane; however, Satan has overstayed his welcome.

DOOL spoilers for the week of December 20th note that Allie and Steve will team up to find a missing Tripp. Does he fall off the beaten path trying to find the perfect Christmas gift for his girlfriend or Henry? Could this be an innocent misunderstanding, or does the Devil have something to do with Tripp’s so-called disappearance?

4. Will Philip Come Between Kate and Roman?

Kate’s finally happy and in love with Roman Brady, but could Philip and his little secret ruin all of this? Days spoilers for this coming week reveal that Ms. Roberts will work hard so that Mr. Brady doesn’t figure out the “truth”. She’ll likely keep Philip’s confidence, but will this be at the expense of her new romantic reunion?

3. Is Lucas Brought Into The Fold?

DOOL spoilers for this coming week hint that Lucas will stumble across something that stuns him. Will he find out the truth about his brother? Could he, too, be asked to keep a secret? Kate may need some help keeping Philip hidden, and she’ll have no other choice but to tell Lucas. Will Mr. Horton help his half-brother and insane mom? He probably will. He’s got no connection to Brady, and despite feeling bad about the ruse, he’ll comply.

DOOL spoilers suggest that Johnny and Chanel will return from Italy this week and share some stunning news with loved ones; however, their parents won’t see why the news is worth celebrating. Do they decide it’s time to leave Salem and start a new life in Italy? Is that why the parental units are so displeased? Or could Chanel be expecting? EJ, Sami and Paulina may not be overly thrilled to hear either of these pieces of news.

1. Allie’s Not Pleased Either

Allie won’t be overly happy if Chanel and Johnny announce their engagement. However, if the couple decided to move to Italy (or anywhere other than Salem), she’d be downright upset to learn that her brother was taking her BFF and business partner away. Sounds like this news is more than just “getting married” or even moving in together. 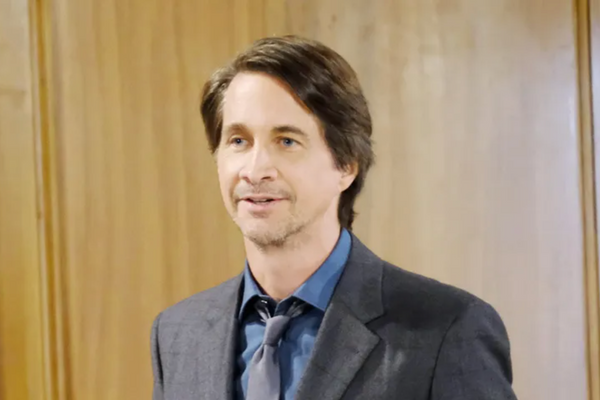