What’s the Devil up to now? Will Sami reunite with Lucas, or are her lovey-dovey actions a ploy to have him confess? Will Abby and Xander have what it takes to find Sarah? New year, new drama in Salem! There’s nothing Days of Our Lives (DOOL) fans love to do more than speculate on storylines. As such, below are some DOOL plotline predictions for January 3rd to 14th, 2022.

12. Where Is DOOL Going With This Now?

Friday, December 31st seemed like a low-key episode, until the Devil arrived. So, Johnny DiMera is now possessed. Do any other fans wish that Satan would just go back to where he came from, already? This storyline was nostalgic at first but could be outrunning its course (like it did the last time around). Where is Days going with this storyline, and why did the writers feel the need to extend it all?

11. The Next Two Weeks With Devilish Johnny

The next two weeks should unveil some hints around what Satan has in store for Salem. Is his target still breaking up John and Marlena, or once again possessing Marlena? Will the Devil entice Marlena again by telling her to sacrifice it all for her grandson? Then again, he may lay low in Johnny so that he can pull a few tricks without anyone noticing. Will Satan still be focused on Ciara and Ben’s baby? The interesting thing about Johnny is that he’s connected to both couples; John and Marlena are his grandparents, while he’s related to Ciara through his mom, Sami.

The interesting thing is that Ciara is close with Allie, Johnny’s twin; however, despite being related, Johnny hasn’t had much interaction with Ms. Weston since he returned to town. The Brady and DiMera families are huge, so Johnny can’t be besties with everyone. With that said, if the Devil is still interested in baby “Cin”, Johnny may start getting close, and fast.

DOOL spoilers for the week of January 3rd suggest that Johnny will have some news for John and Marlena. In fact, the bombshell will have rippling effects on John and Marlena, as well as Allie and Chanel. Could he announce that he’s decided to do a movie based on everyone’s recent experience? This would not go over well with anyone.

8. Johnny Wants A Baby Of His Own

Why obsess over someone else’s baby when Johnny has a wife of his own that can reproduce? His big news might be that he’s ready for a family, which could also turn Chanel off. She’s a strong, independent woman who might not be ready for a baby. Plus, if Johnny tells the world that he and Chanel want children, without consulting her first, she could get quite upset. She’d also start to notice something is “off” with her new hubby.

Susan is set to have a premonition this week, and she’ll tell Marlena about it. It’s likely that Banks can still feel the evil around her, and Evans might, as well. The good doctor was shaken on Friday’s episode when the TV glitched, so it’s likely that Marlena will feel unsettled about everything over the next two weeks. However, she’ll try to cover it up so as not to worry John and the others. Bad move, Marlena… bad move!

DOOL’s preview video for this week suggests that Sami and Lucas could reunite. She’ll tell him that she believes he is her soul mate, and the two will share a passionate kiss. Other spoilers for this week state that the soon-to-be ex-Mrs. DiMera will also tell Lucas that she believes the best way for them to start a new chapter is to leave town. Horton will likely jump at the opportunity to do so. There’s a good chance that this week is the last week we will see Sami or Lucas for a while.

Chad’s going along with Lucas’s plan to nail EJ, and it’s working in his favor. Unlike the other DiMeras in the mansion, Chad isn’t the biggest schemer in the bunch. He’s manipulated a little in the past; however, he does tend to walk in line with good, not evil. DOOL spoilers for the week of January 10th imply that Chad might have second thoughts about what he’s done. With Sami and Lucas (possibly) out of town, could DiMera decide to tell EJ the truth about everything?

4. The Search For Sarah Horton

DOOL spoilers state that the search for Sarah Horton will begin this week! Added teasers note that Abigail will join forces with Xander to hunt the young lady down. Maggie will recruit Abby for help, which may ruffle Gwen’s feathers. Xandy and Abigail will be spending a ton of time together, searching for Ms. Horton. Could a new friendship – or more – arise between this unlikely pair?

3. The Search For Kristen DiMera

Meanwhile, Steve and Kayla will officially embark on their search for Kristen DiMera during the week of January 10th. Sounds like this mission might be a dangerous one, which is why Mrs. Johnson will insist on accompanying her husband. Great news for fans of this super couple, as they work better together. Having said that, what about Kay’s hospital duties? Guess she can easily get an extended leave or holiday? Oh, anything is possible in the land of Salem! Patients, shmatients, right?

DOOL spoilers hint that Nicole will be “shaken” by something during the week of January 3rd. This has “Ava Vitali” written all over it. Will Walker find the teddy bear that she and Rafe were “sharing custody” with in a boiling pot of water (or maybe spaghetti sauce, since Ava loves to cook Italian)? Perhaps Vitali will leave Nicole a threatening note at work? Ava has snapped, so anything is possible.

1. Plans For Tony And Anna

DOOL spoilers for this coming week reveal that Anna and Tony will return from Europe, so what storyline will they dive into? Will Tony help Chad keep EJ ousted from DiMera Enterprises, or flip sides and help his other brother? Could they get involved in the possession storyline? Anna does have some great intuition. She may sniff out Johnny’s odd behavior before anyone else does! 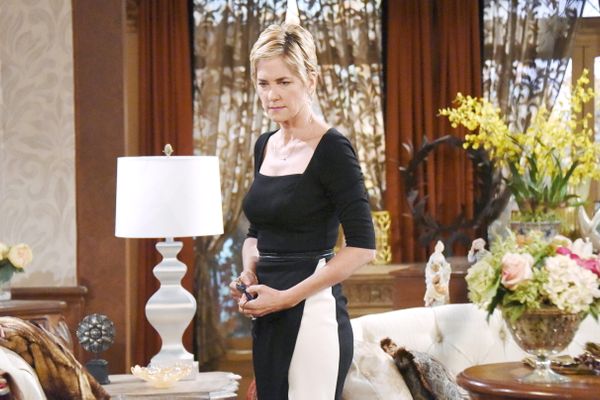 Days Of Our Lives Criminals Ranked