Will Sami be able to put her marriage back together, or will Lucas continue to place the pressure on her? Who will discover Kate’s blindness and amnesia charade? Who will Chloe gravitate to over the next couple of weeks, Brady or Philip? So many questions, so few answers! There’s nothing soap opera fans love to do more than speculate on storylines. As such, below are some Days of Our Lives (DOOL) plotline predictions for June 14 to June 25, 2021.

From the looks of the DOOL preview video and spoilers, Sami will be juggling both E.J. and Lucas in the weeks ahead. She and Horton will “almost” get caught by Marlena, and she’ll also land in bed with her hubby. E.J. will question Sami on her “relationship” with Lucas, and Sami will likely deny any wrongdoing. She’ll struggle to keep her affair with her ex under wraps, while trying to rekindle something with DiMera.

11. Lucas Will Push Back

Lucas wants to reunite with Sami, bad. He believes that the two make an incredible pair and have a certain something together that she and E.J. lack. With that said, Sami will likely try and push Horton back, now that DiMera has returned to Salem. But how long can she keep Lucas at bay?

E.J. has returned and it seems like he wants his old spot at DiMera back. DOOL spoilers hint that he’ll not only give Tony some sort of offer but also form an alliance with Chad to dethrone Jake at DiMera Enterprises. Could he be using Sami to get his job back, with a plan to dump her once he settles back into business? E.J.’s not the most trustworthy husband around.

9. Jake Will Be Too Preoccupied To Notice

Jake’s dealing with guilt around Kate’s condition and might be too preoccupied with her and Gabi to realize what Chad, Tony and E.J. are up to. He also lacks the DiMera manipulation factor, so he might not even think that his brothers are working to boot him from the company’s top spot.

8. Kate Gets In On The Action

Kate will get found out by someone this week, but whoever realizes that she’s lost neither her sight nor her mind won’t alert Jake. As Days spoilers indicate, she’ll continue to “torture” her ex-love into the week of June 21st. Who could find out about her plan? There’s a good chance it’s E.J., who might bring her into his scheme to boot Jake as CEO. She’ll certainly help him within a blink of an eye, as aligning with E.J. would only enhance her acts of revenge on Jake.

Then, there’s a chance that Roman is onto Kate’s scheme. He won’t run to Jake if she tells him not to; Mr. Brady has a major soft spot for Roberts, anyway. He’ll do whatever she asks of him. Therefore, Roman may realize she doesn’t suffer from either amnesia or blindness but merely keep it to himself. Roman could become a confidant for Kate and decide to help her navigate through these feelings.

Either way, Kate will not only continue to “torture” Jake with her condition, but she’ll get under Gabi’s skin as well. Hernandez is annoyed by Roberts’ antics, and after “waiting” for a reunion with DiMera all this time, the idea that their romance is put on hold even further will leave her feeling resentful and upset. She’ll be onto Kate’s scheme, but it’ll be hard for her to open Jake’s eyes to it, or get any real “proof” of it.

Philip and Brady will both fight for Chloe’s affections over the next couple of weeks. Days spoilers for the week of June 21st imply that Philip will have an offer for Lane that is unexpected. What could Kiriakis offer Chloe that will stun her? With all that has happened, could he ask the beauty to move into the mansion with him, so that he can take care of her and keep her safe?

4. Who Does Chloe Choose?

While the DOOL summer preview video shows Chloe kissing Brady, there’s also a scene that shows Lane “wanting” to kiss Philip. Who will she ultimately choose? Seems like Chloe will feel torn, and while she might lock lips with Brady, her heart could belong to Philip. After all, Kiriakis moved mountains to save Lane, and this might be the factor that turns her towards Philip.

Gwen and Xander will continue to get closer in the coming weeks, and he’ll go to bat for Rizczech during the week of June 21st. While he’ll have good intentions, it sounds like Xandy could make things worse for Gwen where Dr. Snyder is concerned. Could the doctor decide to up the ante with her blackmailing? Could he threaten Jack’s safety?

Kayla, Steve, Justin and Bonnie will go on a double date this week, but it sounds like things could end on a low note. Bonnie will be nervous heading into the date and feel the pressure to gain approval from Steve and Kayla. Sounds like Steve won’t make it easy for Bonnie, which will lead to “harsh words” from Lockhart. She’ll lay her cards out; will she gain Johnson’s respect when she does so, or will she increase the tension?

Rafe will offer Ben some advice about Ciara over these next two weeks. What kind of words of wisdom will he provide? There’s a good chance Hernandez encourages Weston to “move on”. After all, Rafe did this very thing when it came to Ciara’s mom, Hope, after he returned to Salem. Ben’s a young man with his entire life ahead of him; perhaps trying to start a new chapter is the best way to go. 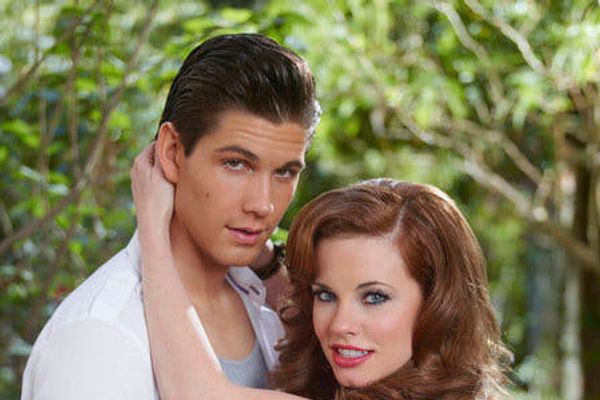