Calling all Days of Our Lives (DOOL) fans! What’s set to unfold during the first two weeks of 2022 in the land of Salem? Johnny will have news for John and Marlena, while Susan has a premonition. Also, the search for Sarah will be officially launched! Learn about these storylines and others in the below DOOL spoilers for January 3rd to 14th, 2022.

12. Johnny Has Some News For John and Marlena!

DOOL spoilers for the week of January 3rd hint that Johnny will have some news for John and Marlena. Could he tell them that the Devil is officially back in Salem (or, technically, that he never left)? Probably not, but whatever he says will surely stun them. In other news, Johnny, Chanel, Tripp and Allie will have an awkward New Year’s Eve.

Whatever “news” Johnny reveals this week, everyone will still feel the repercussions of it during the following week. DOOL spoilers for the week of January 10th hint that the young DiMera’s news will cause chaos and plenty of tension between Chanel and Allie. What has Johnny proclaimed and how will it cause such drama?

Speaking of Johnny, DOOL spoilers for this week reveal that Paulina will have some major plans for Chanel and Mr. DiMera. Little does she know, Satan has plans of his own! In other Paulina news, she’ll extend an invitation to Lani. Will Lani accept or decline it? Fans will have to tune in to find out.

DOOL spoilers for the coming week suggest that Susan Banks will have a premonition and relay it to her good friend, Dr. Marlena Evans. Will this be about the Devil? Marlena seemed quite shaken during Friday’s episode when the television glitched, so she may not want to believe what Banks has to say, but she may have an inkling that Susan is right.

8. The Search For Sarah Horton

DOOL spoilers for this week indicate that the search for Sarah Horton will officially commence! Maggie will turn to Abigail in the hopes that she can help her find Sarah, while Xander will question Rex in the coming days to see if anything he says can spark a lead in the right direction.

As the week progresses, Days spoilers note that Abigail and Xander will join forces to find Sarah. Two heads are better than one, right? In other news, Jack and Xandy will decide to put their past behind them and make amends. Lastly, with the holidays over, Jack and Jennifer will head back to Boston. Here’s hoping they return to Salem really soon.

6. The Search For Kristen DiMera

Sarah Horton won’t be the only Salemite people start looking for this week. DOOL spoilers indicate that Brady will turn to Steve in the coming days to find his ex and baby momma. With that said, Kayla will insist on joining her hubby during this investigation. In added teasers for the week of January 10th, Steve will head out on this mission with Kayla in tow!

DOOL spoilers for this week state that Kate will kick off 2022 with some honesty, as she confesses to Roman. Could this be about Philip, and how she knew what he was up to before Mr. Brady did? As the days go by, she’ll try and get Chad to offer up the full truth. But will that be easier said than done?

DOOL spoilers for the week of January 10th state that Mr. DiMera will start to feel “uneasy” about his scheming against the company. Will he spill his own beans, or try to shake off the conscience he’s growing? Sounds like he’ll probably try to bury the bad feeling and move forward with his plan.

DOOL spoilers imply that the drama is about to increase at the DiMera mansion, as Tony and Anna will return from Europe by the time the weekend hits. How will this affect Chad and his scheming? Perhaps they’ll get drawn into Johnny’s devilish dealings? Either way, Tony and Anna will make things interesting in the land of Salem for 2022.

DOOL’s preview video implies that Sami will finally give Lucas the romantic reunion he’s longed for. She’ll tell him that she believes he is her soul mate. When he questions her on returning to EJ, she’ll reach in for a passionate kiss. Added teasers imply that Sami will believe the best option for the two of them is to leave Salem. Will they ride out of town and into the sunset together?

Lastly, DOOL spoilers for this week note that something will happen to Nicole that leaves her shaken in the days ahead. What’s this all about? As the week progresses, EJ will try to make amends with Walker, but she may not be in the mood to do so. Will these two come together in light of recent events, or could they decide to move on from each other? 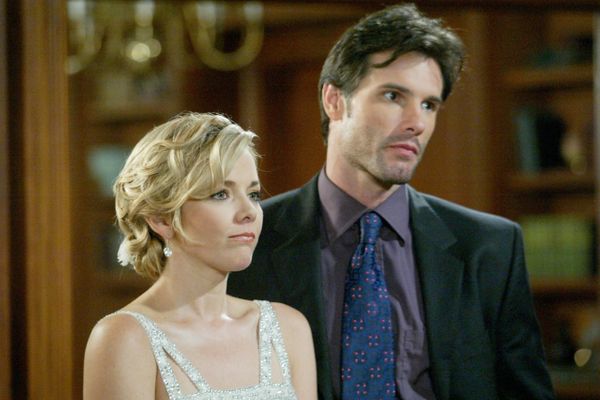