ABC’s Modern Family has been a huge hit. Following a mockumentary style, the show follows a gay couple, Mitchell and Cameron and their daughter Lily; a straight couple, Phil and Claire and their three kids Haley, Alex, and Luke; and a multicultural couple, Jay and Gloria, her son Manny from a previous relationship and their son Joe. During its nine season run, the show has been lauded by critics. During its first five years, it won the Emmy Award for Outstanding Comedy Series and it also won the Emmy Award for Outstanding Supporting Actor in a Comedy Series four times, twice for Eric Stonestreet and twice for Ty Burrell, as well as the Outstanding Supporting Actress in a Comedy Series, which Bowen won twice. So far, it’s won a total of 22 Emmy awards from 75 nominations, which is pretty darn good! Since the show is such a hit, here are 10 things you didn’t know about the acclaimed series:

In Modern Family, Mitchell and Cam went to Vietnam to adopt Lily.  However, Vietnam’s laws prohibit adoptions by same sex couples or single parents.  Someone on the show did not do their research!

9. It takes a smart person to play a dumb one.

While Nolan Gould’s character Luke Dunphy plays a dunce on Modern Family, he is actually quite the smarty pants in real life. When he was thirteen, he told Ellen DeGeneres that his IQ was 150 and he was also a Mensa member.  Even though his co-star Ariel Winters (Alex) is 10 months older than him, he is two grades ahead of her.

Off screen, Modern Family’s Alex Dunphy (Ariel Winters) is a singer in a band called WickedStreet with her best friend.  They even released a CD.  Turns out she is musical on set and in real life.

Sarah Hyland who portrays Haley Dunphy underwent a kidney transplant in April 2012.  She struggled with kidney dysplasia since she was nine-years old and remarked that she could never go to any sleep away camps.  Her hero of a dad, actor Edward James Hyland, donated his kidney to Sarah.

Ty Burrell who stars as Phil Dunphy admits that he is incompetent when it comes to technology.  He stated, “My wife handles all of our technology. So if something goes wrong with the computer, I throw up my arms and step aside while the IT gal figures it out.”  It seems that Ty has that in common with his character Phil.

Sofia Vergara was casted as Gloria Delgado-Pritchett, Jay’s hot and young Colombian wife.  In real-life this Cover Girl was raised in Barranquilla, Colombia.  She was actually studying to be a dentist when she was discovered by a photographer and became a model.  She moved her family to the United States when her acting career took off, but her brother was deported back to Colombia in 2011 after being arrested.

3. Whose Hands are Registered Weapons?

After training for 15 years, Ed O’Neil has a black belt in Brazilian Ju-Jitsu.  He’s not quite the couch potato that he portrays on Modern Family and Married with Children.

Actress Julie Bowen who plays Claire Dunphy, is a well-educated celebrity.  She received a BA in Renaissance Studies from Brown University in 1991 and speaks fluent Italian.  She studied in Florence, Italy during her junior year at college.  Another little known fact about Bowen is that she has a pace maker.

On Modern Family, Ed O’Neil’s character Jay Pritchett has a daughter named Claire Dunphy played by Julie Bowen. In real life, O’Neil’s daughter is also named Claire. His other daughter’s name is Sophia, which is similar to his co-star’s name Sofia Vergara. 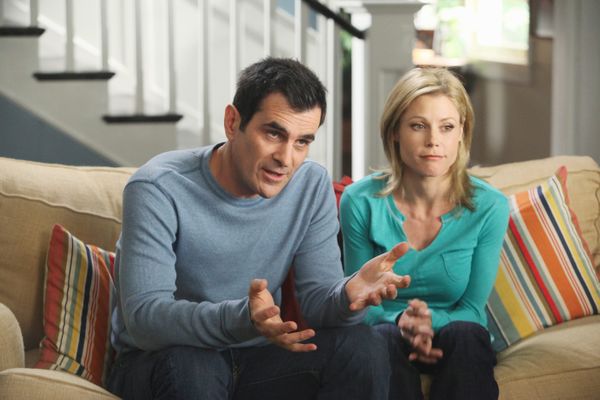