Most Memorable Episodes Of Gilmore Girls

Gilmore Girls is one of those shows that always had a really loyal following and we think it’s because of its content. The show explored family, friendship, romance, intergenerational divides and social class while approaching it all with humor. The characters and their fast-paced dialogue filled with clever pop culture references won over fans and critics alike. For those of you who only want to see the show’s best episodes, we have collected the 10 most memorable:

For the first few episodes of Gilmore Girls, Rory comes off as pretty mild. Unlike her mother, Lorelai, she’s sweet and doesn’t seem to challenge the status quo but, in “The Deer Hunters,” we see her miss a big test, get mocked by her classmates for her tardiness and then we get to watch her totally lose it on Paris and Tristan. This episode is perfect because viewers get to see how much alike Rory and Lorelai are, as they both throw hilarious tantrums when they don’t get their way!

In the episode “Christopher Returns,” viewers finally get to meet Rory’s dad, Christopher. While many were already convinced that Luke was the guy for Lorelai, seeing her chemistry with Christopher definitely threw us for a loop. He wanted to marry Lorelai back when she first got knocked up with Rory and he proposes again during the episode, which left us wondering…could Christopher be the one?

Lorelai definitely had her fair share of suitors – there was Luke, Christopher and who can forget Max, the guy she was supposed to marry during season two! Unfortunately for Max, during her bachelorette party, she calls Christopher to let him know she’s betrothed and the conversation causes her to have cold feet and makes us wonder – what is it with Lorelai and Christopher? In true Gilmore Girl fashion, she abruptly cancels the wedding and goes on an impromptu road trip with Rory to avoid having to hear the town’s people gossip about the canceled wedding.

In the episode “I can’t Get Started,” fans get their hearts ripped out when Lorelai and Christopher try to make another go at it, only for his ex, Sherry, to get in the way. She calls Christopher to let him know that she is pregnant and he abruptly leaves Lorelai at Sookie and Jackson’s wedding to go be with Sherry. Meanwhile, Rory can’t seem to stay away from Jess – despite the fact that she’s still with Dean – and the two (finally) share a kiss. Who knew so much drama could unfold at a wedding?

With all of the Rory/Dean/Jess tension, at Stars Hollow’s 24-hour dance marathon, fans finally get a resolution after Dean totally loses it on Rory on the dance floor and breaks up with her, paving the way for her and Jess to hook up. Lorelai also offers plenty of humor thanks to her all-consuming desire to win the contest and Adam Brody makes an appearance as the adorable Dave Rygalski.

For four seasons, fans had been observing Luke and Lorelai’s chemistry, wondering what is going to happen between them, and in “Raincoats and Recipes,” something finally does, as they finally share a kiss. While everything is moving along for Luke and Lorelai, things also move along for Rory and Dean, who is still married. In the most memorable scene of the episode, Rory loses her virginity to Dean and then Lorelai and Rory have their first major fight as Lorelai explicitly tells her daughter that she disapproves of her having a relationship with a married man.

This episode is definitely one of the more memorable ones because Luke and Lorelai finally have their first date and fans (and Lorelai) finds out that he’s been holding on to a horoscope that she gave him for the past seven years! In this episode, Rory meets Logan for the first time. Even though he comes off as spoiled and entitled, it’s pretty obvious that he’s going to steal Rory’s heart!

Things finally start to get exciting for Rory at Yale in “You Jump, I Jump, Jack” when she discovers that Logan is part of The Life and Death Brigade. She joins him and his group on one of their outings so that she can report on it for the Yale Daily News and she finally gets outside her comfort zone as she has a once in a life a lifetime experience with him and his friends.

In “Wedding Bell Blues,” Rory and Logan try to take their relationship to the next level, despite the fact that he doesn’t do monogamy, and things get even more complicated for Lorelai when her parents invite Christopher to their wedding vow renewal ceremony even though they know that their daughter is bringing Luke. The whole episode is incredibly dramatic, especially when Christopher, Luke and Lorelai walk in on Rory making out with Logan, which leads to an angry confrontation between Christopher and Luke.

Season seven was definitely the weakest season, but the final episode, “Bon Voyage,” brings back some of the charm that made the first six seasons so memorable. Rory is leaving Stars Hollow to take a job as a political reporter on Barack Obama’s presidential campaign and the entire town gets together to throw her the perfect going away party. They are up against some serious time constraints though, as Rory only has a few days to pack and then get on the road. Although Lorelai and Luke spend season seven apart, in the series finale, it looks like they are getting back together as they share a kiss at Rory’s goodbye party. It might not have been the way that creator Amy Sherman-Palladino envisioned the last episode ending, but it was still pretty sweet. 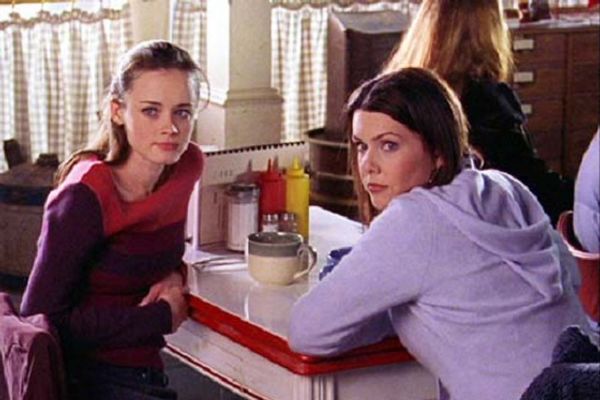