Donald Trump first made a name for himself as a real estate mogul and then parleyed his fame into a reality TV career with the show Celebrity Apprentice. Always on the lookout to expand his empire, he’s now breaking into politics. Since he’s about to turn the big 7-0, we have 10 things that you probably didn’t know about Mr. Trump:

The billionaire was born on June 14, 1946 in Queens. He was the fourth of five children. His mother Mary Anne was a homemaker and a philanthropist and his father Fred was a real estate developer. While his father was born in Woodhaven, Queens to German immigrants, his mother was from the Isle of Lewis in Scotland, United Kingdom.

When Trump was 13, his parents sent him to the New York Military Academy to straighten him out. He finished the eighth grade and high school there and became a star athlete and student leader.

He attended Fordham University for two years and then transferred to the Wharton School of Business at the University of Pennsylvania and graduated with a degree in economics in 1968. During university, he worked at his father’s real estate company, Elizabeth Trump & Son, and he joined the company after graduation. In 1971, he was given control of the company, which he later named, Trump Organization.

The real estate mogul’s father, Fred, would tell people that his family was of Swedish origin even though both of his parents were born in Germany. Ivana Trump reportedly once explained that he did this because a lot of his tenants were Jewish and he didn’t believe any of them would rent from him if they knew his background.

The real estate developer turned celebrity has been married three times. His first wife was Czech model Ivana Zelníčková; they were married in 1977 and had three children together: Donald Jr., Eric and Ivanka. They divorced in 1991 and in 1993 he married Marla Maples. Two months before their marriage, they had a daughter, Tiffany, and in 1997 they divorced. He married Melania Knauss in 2005 and together they have one son, Barron. He also has five grandchildren – five via his son Donald Jr. and three from his daughter Ivanka.

The Celebrity Apprentice star has never done drugs or smoked cigarettes. His older brother Fred Jr. died of complications from alcoholism, so he doesn’t drink either.

He is a self-professed germaphobe. He dislikes shaking hands with strangers because he’s afraid of being exposed to germs.

The real estate tycoon has been seriously considering running for president for about 25 years. He first considered it in the 1980s and in the year 2000 he entered the presidential race as a Reform Party candidate, but withdrew. He also considered running in the 2004 election, but decided not to join the race. In 2011, he considered running against Obama, but changed his mind and endorsed Mitt Romney instead.

While Trump has never filed for personal bankruptcy, his hotel and casino businesses have declared bankruptcy four separate times between 1991 and 2009. According to him, he has used bankruptcy laws to his advantage. “I have used the laws of this country – just like the greatest people that you read about every day in business have used the laws of this country, the chapter laws, to do a great job for my company, for myself, for my employees, for my family, et cetera,” he said. 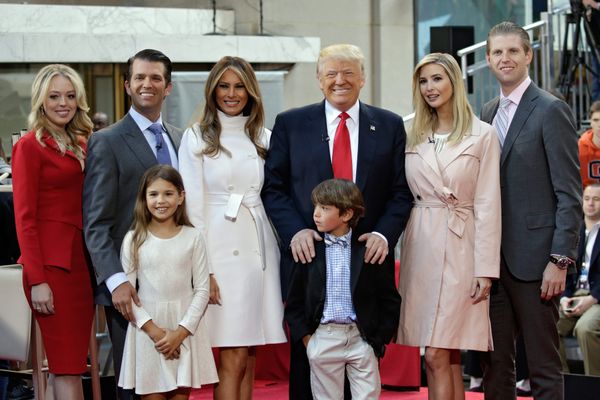